Toronto Film Society presented Angels in the Outfield (1951) on Sunday, April 8, 1990 in a double bill with It Happens Every Spring as part of the Season 42 Sunday Afternoon Film Buffs Series “A”, Programme 8.

This afternoon’s second feature was directed by Clarence Brown and stars Paul Douglas, who was Mark Lanigan in the first feature, It Happens Every Spring.

Angels in the Outfield is a silly but fun baseball movie with Douglas as the gruff manager of a ball club firmly entrenched in the basement, that suddenly finds itself climbing to first pace for no apparent reason.  Enter a lady reporter, Janet Leigh, who prints a newspaper story about a little orphan girl, Donna Corcoran, who swears she’s seen angels standing among Douglas’ ballplayers, trying to help them win.  Soon after, Douglas is accidentally hit in the head by a line drive and admits to the press that, indeed, angels have been helping the team.  This brings on an investigation into his sanity by the baseball Commissioner.

Variety made this comment on the film in its reviews: “Great credit of course goes to Producer-Director Clarence Brown.  He has carved a tremendously staisfying filmization from a script by Kingsley and Wells that, from every evidence, could have gone haywire if handled clumsily, dealing as it does with fantasy.  Religious angle also presented a delicate situation, but Brown has handled it all masterfully.”  The review continues to say: “Douglas is perfect as the brawler reformed by a little girl’s prayers.  Scenes in which he bellows at the team and the umpire while the soundtrack crackles with an insane gibberish are among the most hilarious of a howl-filled film.”

(Remember to be on the look-out for surprise appearances by Joe DiMaggio, Ty Cobb, Harry Ruby and Bing Crosby.) 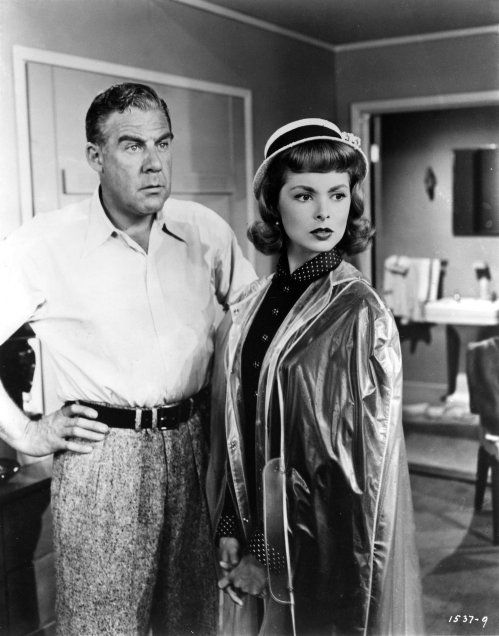 Clarence Brown, the director of Angels, was born on May 10, 1890.  He was educated at the University of Tennessee, graduating with a degree in mechanical and electrical engineering.  He apprenticed with Maurice Tourneur, who was about to direct Clara Kimball Young in a film version of Trilby.  During the making of The Last of the Mohicans, Tourneur was injured and Brown finished the film for him; they share the directorial credit.  Joseph Schenck admired Brown’s work, and signed him to direct two films for him at United Artists–The Eagle (1925) starring Rudolph Valentino, and Kiki (1926), starring Schenck’s wife, Norma Talmadge.  Brown directed seven films for Garbo, five for Crawford, and two for Shearer; and, in spite of that record, will probably be best remembered for his cinematic adventures in Americana, such as Ah Wilderness, Of Human Hearts, The Human Comedy, The Yearling and Intruder in the Dust.  His other films include Anna Christie (1930), A Free Soul (1931), Possessed (1931), Anna Karenina (1935), Idiot’s Delight (1939), The White Cliffs of Dover (1944) and National Velvet (1944).

Paul Douglas, who stars in both features today, was born on April 11, 1907.  He was married to the actress Jan Sterling.  Douglas began his acting career on Broadway in 1945 in the play “Born Yesterday” in the role of the loud-mouthed, impatient junk dealer Harry Brock.  Douglas played in over 1,000 performances.  He turned down the role, which eventually went to Broderick Crawford, in the film version by George Cukor.  In 1948, Douglas made his film debut in Joseph L. Mankiewicz’ A Letter to Three Wives.  During his eleven year movie career, Douglas alternated smoothly between drama and comedy.  Among his most dramatic vehicles were Elia Kazan’s thriller Panic in the Streets, as a New Orleans detective; Fritz Lang’s film version of the Clifford Odets melodrama Clash by Night, playing Barbara Stanwyck’s cuckolded husband; Robert Wise’s big-business ensemble drama Executive Suite; and Ken Hughes’ Shakespeare-inspired gangster film Joe MacBeth, in the title role.  Paul Douglas died of a heart attack on September 11, 1959.