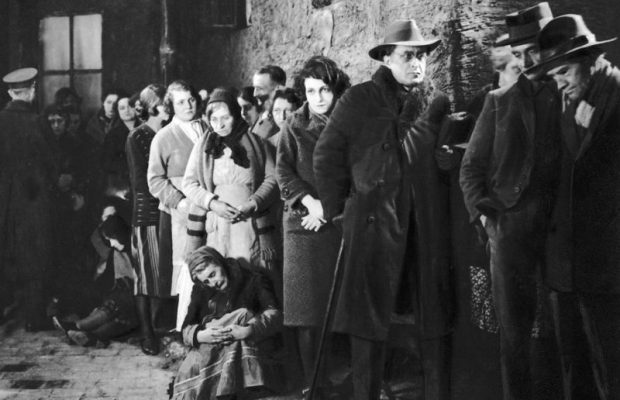 Enthusiasts for “theme programming” might call this our “Street” Programme!  At first thought it seems like stretching a point to link Charlie Chaplin’s Easy Street with G.W. Pabst’s The Joyless Street; but while Chaplin’s treatment is a comic one, there is porverty and degradation in his film as well as in pabst’s–and if you look for them, some of the implications may be just as bitter. However, its rowdy fun is so engaging that perhpas one shouldn’t risk spoiling it with too much analysis along these lines!  so, on with the show.

“One of the gayest films of this period”, say Bardeche & Brasillach in their History of the Film. Lewis Jacobs in The Rise of the American Film calls it “one of his best and most characteristic efforts”, while Theodore Huff, a leading authority on Chaplin, wrote: “The most famous of the Chaplin Mutuals.  Though not as hilariously funny as some (sic), it has the most cleverly worked-out story, in which some have read social criticism and others a satire on puritanism.”

First, a word of warning!  The Museum of Modern Art Film Library says that this version, “all that is known to be extant, was assembled from the French and Italian versions”.  From this, and from rather vague memories of a screening of this print a few years ago, I would think that this is not a complete version (especially as the film was apparently heavily censored in various countries!) Consequently it may not quite live up to some of the more laudatory critical comment quoted hereunder; but it was felt it would be of interest to members of the SFS to have a look at the early work of Pabst and Garbo and the late work of the once-famed Asta Nielsen.

Since I am not even certain of the subtitle situation in this version, I quote now from Gidon Bachman’s notes on the film in Cinemages, which give something of the plot: “The film which first brought fame and renown to Pabst.  A study of inflation-ridden Vienna after the first World War. The war lost, the result of the defeat is economic and moral breakdown, poverty and despair. Black-marketeers and other profiteers have a high time taking advantage of the poor people and also of each other.  This was the background.  The characters: there is the consul of a South American country who, together with a few native profiteers, makes people lose their savings through fictitious transactions.  A high official who has lost his job.  His daughter, who nearly becomes the victim of a procuress.  There is also a bank clerk who pretends to be in love with the wife of a district attorney only to get money from her.  He wants this money to win the love of a rich girl he is really in love with, and also to start a black-marketing career.  His former girl friend kills the attorney’s wife, and suspicion falls on the bank clerk.  Later, the true killer admits her guilt and the rich girl, running down all obstacles set up by her relatives, stays with the clerk.  Around these characters, a host of rather questionable figures grew in a natural way from this sinister background of the moral and social chaos of the Vienna of 1923.  Incisive direction and a carefully selected cast made this film one of the most important in the early history of cinema.”  (There also appears to be some sort of a happy ending for the father and daughter through a Salvation Army lieutenant!)

MMA Film Notes: “Pabst’s second film provided Garbo with her second leading role (after Gosta Bertling), although the picture nominally centers around the great European favorite, Asta Nielsen. An account of the defeat and hunger in the Vienna of the early 20’s, it is the first and one of the best examples of Pabst’s ability to present the characters of a story in close relation to the forces which motivated them.”

Bardeche & Brasillach: “There are few German films more celebrated than The Joyless Street. In it Asta Nielsen, in her decline, with her regal beauty and magnificent acting, crossed the path of a young girl just starting on her career and newly come from Sweden–Greta Garbo.  Pabst threw into contrast in this film the pleasures of the rich and the misfortunes of the poor in famine-ridden Vienna during the inflation.  As often happens, the pleasures were rather ill-represented, bu the miseries inspired Pabst to tragic and violent overtones.  It was in The Joyless Street that we first saw queues of poor people waiting under the livid lamplight in the icy streets. (Not quite–D.W. Griffith beat Pabst to it with a memorable meat-queue sequence in Isn’t Life Wonderful?–GGP.) Who can forget the amazing face of Asta Nielsen, Frozen to marble stillness amid her feathers and her pearls when, as the prostitute, she determines to send her lover to the gallows; or the horrible procuress, or the disgusting butcher who rules over the entire street and gives meat only to whom he pleases?  though the story was overpathetic, Pabst saved everything by his ability to put on the screen as vividly as any painter the lights drowned in fog, the leprous houses, slimy staircases, poor dwellings and a whole downtrodden humanity.”

Siefried Kracauer in From Caligari to Hitler: “Real life was Pabst’s true concern.  He began to penetrate it in The Joyless Street.  Soon winning fame in Germany and abroad, it pictured Vienna during the inflation, with special emphasis on the pauperization of the middle class.  His unhesitating realism in rendering this decline shocked his contemporaries.  England prohibited public showings; versions released in Italy, France, Austria and elsewhere were mutilated.  The film contrasts tough profiteers and destitute middle-class people; expensive restaurants sparkling with light and dim-lit homes visited by hunger; noisy effervescence and silent withdrawal into sadness.  The ruin of the bourgeois family is portrayed with a social consciousness that transforms it into a typical case.  He elaborates on the interrelationship between the enforced economic decay of the middle class and the selling-out of its moral values.  What he exhibits–for the first time from the angle of a realistic observer–is the feverish finale of that postwar world which expressed its inmost preoccupations through screen fantasies wavering between the images of tyranny and chaos.  The ghastliness of this world is displayed in scenes that seem to record unstaged events.  Instead of arranging significant pictorial compositions, Pabst arranges real-life material with veracity as his sole object.  His is the spirit of a photographer.  Though he never goes so far as to suggest a line of conduct, he undeniably points to the relationship between individual suffering and social injustice.  To intellectuals Pabst’s realism appeared a moral protest, if not a socialist manifestation.  On the other hand, The Joyless Street inclines towards melodrama.  Sufficiently courageous to detail the social misery, Pabst does not mind cutting short the conclusions that might be drawn from his report.  His weakness for melodrama counterbalances the implications of his realism.”

Other Notable Films by Pabst: Pandora’s Box, The Love of Jeanne Ney, Westfront 1918, Kameradschaft, Dreigroschenoper, Secrets of the Soul, The Last Ten Days.

Related ItemsAsta NeilsenG.W. PabstGreta GarboSeason 12Silent Series 12The Joyless Street (1925)
←Previous The Body Snatcher (1945)
Next → The Birth of a Nation (1915)