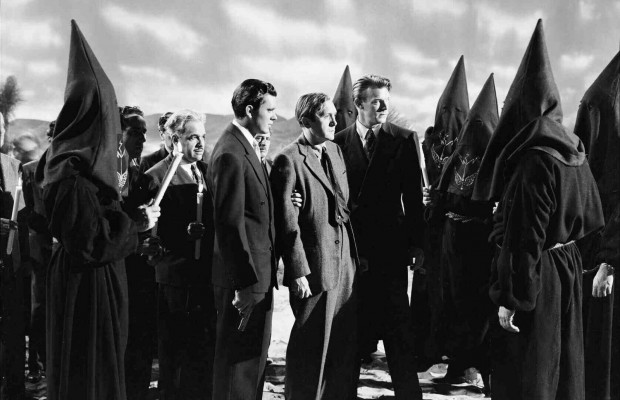 Toronto Film Society presented The Leopard Man (1943) on Monday, February 9, 1976 in a double bill with The Thief of Bagdad as part of the Season 28 Monday Evening Film Buff Series, Programme 4.

“The Leopard Man is the least-discussed of the three [I Walked With a Zombie and The Seventh Victim are the two other Lewton films referred to], and one of Lewton’s best.  Perhaps it’s because it isn’t as available as are others of his, or maybe Lewton partisans prefer the supernatural elements in his films, while The Leopard Man is merely a Cornell Woolrich whodunit about a lethal cat on the loose and some murders in a small desert town.  Certainly the sound track is used creatively, with brilliance, more than any Lewton film, which is saying a lot.  The clickings of castanets are used as a contrapuntal motif throughout the film, from the opening scene, and the sharp sounds are amplified to ear-splitting intensity during the denouement.  The one sequence mentioned most is the frightening one of a young native girl walking home alone across the dimly lit desert, similar in nature to the scene in The Cat People.  The difference is that this sequence ends in tragedy and horror, making it all the more effective in retrospect.”  (Miller, Don, “B Movies”, N.Y., Curtis, c1973)

“The Leopard Man is a cleaner and much less sentimental Lewton, sticking much more to the suspense element and misdirection, using some of this favorite images, people moving in a penitential, sleep-walking manner, episodes threaded together with a dramatic sound.  This fairly early peak example of his talent is a nerve-twitching whodunit giving the creepy impression that human beings and ‘things’ are interchangeable and almost synonymous and that both are pawns of a bizarre and terrible destiny.  A lot of surrealists like Cocteau have tried for the same supernatural effects, but, while their scenes still seem like portraits in motion, Val Lewton’s film shows a way to tell a  story about people that isn’t dominated by the activity, weight, size and pace of the human figure…More important in terms of movie invention, Lewton’s use of multiple focus (characters are dropped or picked up as if by chance, while the movie goes off on odd tacks trying to locate a sound or a suspicion) and his lighter-than-air sense of pace created a terrifically plastic camera style.  It put the camera eye on a curiously delicate wave length that responds to scenery as quickly as the mind, and gets inside of people instead of reacting only to surface qualities.  This film still seems to e one of Hollywood’s original gems–nothing impure in terms of cinema, nothing imitative about its style, and little that misses fire through a lack of craft.”  (Farber, Manny, “Negative Space”, NY., Praeger, c1971, p. 49-50)