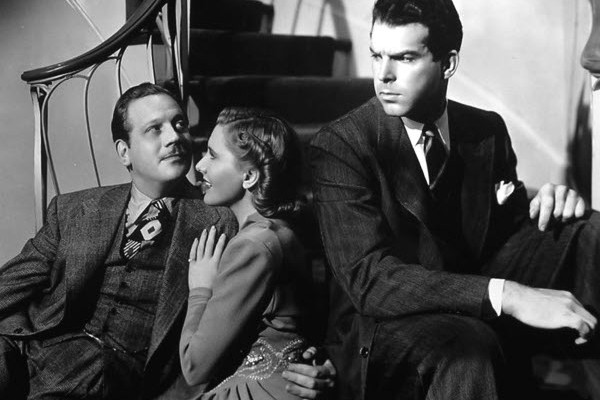 Toronto Film Society presented Too Many Husbands on Monday, December 2, 2013 in a double bill with A Girl, A Guy and a Gob, as part of the Season 66 Monday Night Film Buff Series, Programme 3.

Is it possible to have Too Many Husbands?  According to the rather neglected wife, Vicky Lowndres the answer is a resounding, NO!!  Vicky’s first husband, Bill, was more interested in his next adventure vacation, than he was his wife.  That is until he was lost at sea and presumed drowned.   Vicky’s second husband, Bill’s best friend and business partner Henry was more interested in the business than his wife.   Then the unexpected happened and Vicky’s life is hilariously turned inside out.   A year after being declared dead, Bill returns having been rescued off a deserted island where he was marooned.   What is Vicky to do now that she effectively has two husbands?  Well, having been neglected twice too many times, Vicky finds that having the undivided attention of two husbands quite delightful.  Understandably, she becomes rather reluctant to make a decision as to who to spend her life with… Much to the discomfort of both Bill and Henry.

JEAN ARTHUR (1900-1991) started her career in the early 1920’s as a silent film star, but didn’t come in to her own until the 30’s and 40’s.  At that time she became a major film star specializing in comedic roles.  James Harvey wrote, “No one was more closely identified with the screwball comedy than Jean Arthur.  So much was she part of it, so much was her star personality defined by it, that the screwball style itself seems almost unimaginable without her.”  Best-remembered for her roles in; Mr Deed’s Goes To Town (1936), You Can’t Take It With You (1938), and Mr. Smith Goes To Washington (1939), films that showcased her comedic style, Arthur also had a wide range of other films to her credit.  At the height of her career Arthur was nominated for the Academy Award for Best Actress for her role in The More The Merrier (1943).  As her last role, Arthur played the memorable but definitely non-comedic part of the rancher’s wife in the movie Shane (1953).  Although well loved by the public eye, Arthur was also known to be a bit of a recluse, often avoiding the media and refusing to be a part of any kind of publicity for her roles.  Life magazine at the time observed that; “Next to Garbo, Jean Arthur is Hollywood’s reigning mystery woman.”   Arthur passed away in 1991, from heart failure at the age of 90.

FRED MACMURRAY (1908-1991) appeared in more than 100 movies and a successful television drama during his illustrious career, starting in 1930 until the ‘70s.  Throughout he was able to work with the likes of; Barbara Stanwyck, Humphrey Bogart and Marlene Dietrich.  He also co-starred with Katharine Hepburn in Alice Adams (1935), Joan Crawford in Above Suspicion (1943) and Carole Lombard in four films; Hands Across The Table (1935), The Princess Comes Across (1936), Swing High, Swing Low (1937) and True Confession (1937).  MacMurray was normally cast as the, all around “nice guy” in light comedies, melodramas and musicals.  Despite this, MacMurray felt that his best roles occurred when he was cast against type, with some saying his most memorable role being that of Walter Neff, and insurance salesman who plots with a greedy wife played by Barbara Stanwyck to murder her husband in Double Indemnity (1944).  MacMurray’s career was revitalized in 1959 when he was cast in the role of the father in Disney’s, Shaggy Dog.  He also was cast in the very successful television series My Three Son (1960-1972) which ended up being one of the longest running television series in the United States.   During this time, MacMurray again paired up with Disney Studios for several other family friendly films, including; The Absent-Minded Professor (1961) and Son Of Flubber (1963).  After the cancellation of My Three Sons MacMurray made only a few more films before retiring in 1978.  MacMurray passed away in 1991, from pneumonia at the age of 79.

Related ItemsFred MacMurrayJean ArthurMelvyn DouglasToo Many Husbands (1940)Wesley Ruggles
←Previous A Girl, a Guy and a Gob (1941)
Next → Double Indemnity (1944)