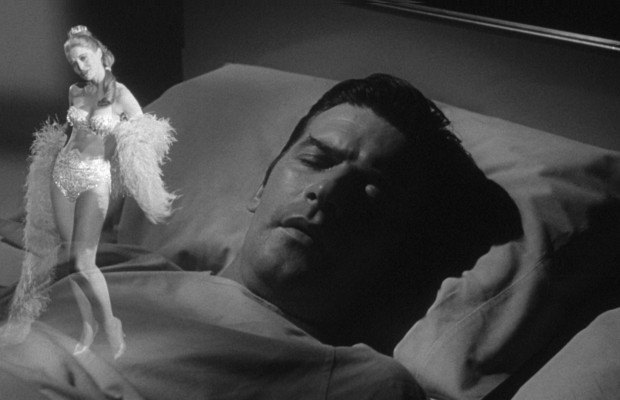 Toronto Film Society presented Shock Corridor (1963) on Monday, July 21, 2014 in a double bill with Beyond a Reasonable Doubt as part of the Season 67 Summer Series, Programme 3.

Journalist Johnny Barrett thinks that the quickest way to get a Pulitzer Prize is to uncover the facts behind a murder at a mental hospital. He convinces an expert psychiatrist to coach him to appear insane; this involves relating imaginary accounts of incest with his “sister”, who is really his girlfriend.  He convinces the authorities and is locked up in the institution where the murder took place. Fellow inmates who were witness to the murder were driven insane for several reasons: brainwashing as a prisoner of war; being one of few black students at an integrated Southern university; or fear of an atomic holocaust. After a hospital riot, Barrett is straitjacketed and subjected to shock treatment that results in his mental breakdown, and, though he identifies the killer, the damage to his mind is irreparable.

Born of Jewish parents who changed their name from Rabinovitch to Fuller on immigrating to America, he worked in journalism from an early age and became a crime  reporter at the age of 17. He also published pulp novels, including The Dark Page, which was adapted into the 1952 movie Scandal Sheet [to be shown later in this series]. From the mid-1930s onwards he wrote screenplays, and joined the United States Army during World War II, where he served with distinction and saw action in many countries, including the D-Day invasion of Normandy and the liberation of a concentration camp. Returning to America, he continued to write screenplays  and began to direct them as well, using his own war experiences as subject matter for some of them. He also made Westerns, crime films, and war films set in the Far East  often on controversial subjects and on low budgets, that were often neglected in the US but were much admired by the French directors of the “New Wave” such as François Truffaut and Jean-Luc Godard (who allowed Fuller, as a guest at a party in his film Pierrot le Fou,  to state his artistic credo: “A film is like a battleground. There’s love. Hate. Action. Violence. Death. In one word, Emotions.”) Partly as a result of his European fame he was adopted as an “auteur” by the younger American critics and directors and his artistic status and respectability increased accordingly. Steven Spielberg and others helped to finance his partly autobiographical Second World War film The Big Red One in 1980, but he encountered problems with Paramount for his script for the film White Dog, which the studio accused of racism and refused to release (though Fuller himself was very far from being racist) and he moved to Europe, where he lived and worked until his death in 1997.

Fuller’s films often featured violence and a visual style that involved intense close-ups, an off-centred framing and shock editing. that resulted in him being sometimes described as “primitive”. He uses  his “pulp” or tabloid style for social comment and to create strong emotional effects in his characters, who are often confused, irrational and amoral, in an attempt to avoid stereotyping them. Shock Corridor, which is considered one of his best films, was selected for preservation in the United States National Film Registry in 1996 as being “culturally, historically, or aesthetically significant”. It has been described as  “a true masterpiece of the unrest of the 1960s”, with Fuller “at his most brutally unhinged, and at his most brilliant” and as “a towering pulp achievement”.  “What Fuller ends up capturing,” one critic claims, ” is the violent psychopathy of a society where  xenophobia, racism, and Cold War paranoia” [the problems of the three hospital inmates] “were literally driving the nation insane….His maniacs aren’t mad so much they are victims, an    d America is the asylum”.

Born with the surname Krantz, he changed it to Cortez to associate himself with his older brother Jacob, who had achieved fame as the actor Richard Cortez. Starting as a set designer for portrait photographers’ studios, he moved into the film industry as cameraman, working with some of the greats (Charles Rosher, Karl Struss, Arthur C. Miller) before becoming first cameraman himself. His own greatest successes were with Orson Welles’ The Magnificent Ambersons and Charles Laughton’s The Night of the Hunter where he displayed a mastery of black and white photography and subtle lighting, and an exceptional skill for moving the camera through space. “The labyrinthine hallways and rooms of the studio set representing a mental hospital in Shock Corridor are transformed by Cortez’s camera into a symbol of incarceration and insanity.” He also filmed Fuller’s next film, The Naked Kiss (1964).

A stage, screen and later television actress, her films include The Horse Soldiers and Sergeant Rutledge for John Ford, and Fuller’s The Naked Kiss, but she is best known for her roles in television soap operas such as The Young and the Restless and General Hospital.