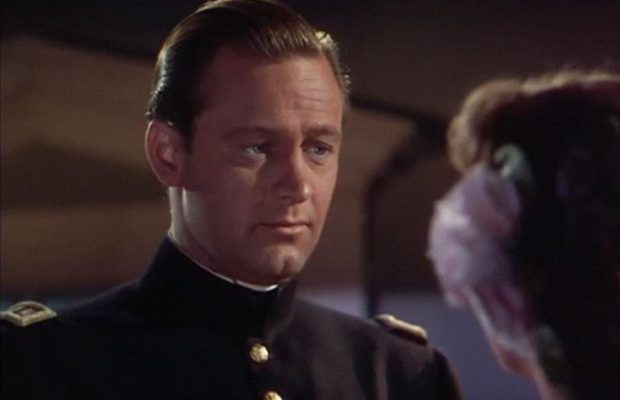 Toronto Film Society presented The Man From Colorado (1948) on Sunday, March 18, 2018 in a double bill with Hangman’s Knot as part of the Season 70 Sunday Afternoon Film Buff Series, Programme 6. 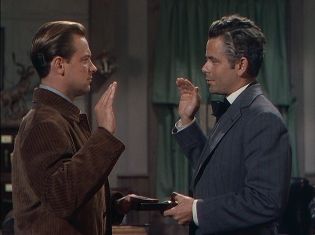 In the late 1940s a cycle of westerns presented a radically different view of the West by shifting from its traditionally optimistic view of human behaviour to a more problematic presentation of psychologically disturbed characters fighting their inner demons.  The cycle of westerns combined elements of the traditional western with an emphasis on entrapment that was more generally associated with urban noir crime films.  Columbia’s contribution to this cycle in 1948 was The Man from Colorado, starring two popular contract players at the studio, Glenn Ford and William Holden.  In 1941, at the start of their careers, both men had co-starred in Texas, an upbeat western that presented Ford and Holden as two cowboys who end up on different sides of the law.  Seven years later, The Man from Colorado presented a more troubling view of human behaviour, it is the more extreme noir western of the late 1940s.

If The Man from Colorado did not have a western setting and mid-nineteenth-century background, it would have been a typical film noir in the late 1940s as it dramatizes the fears and anxieties, especially involving a strong sense of disillusionment and dislocation, found in many urban noir films released between 1946 and 1949.  The Man from Colorado adapts, and transforms, these aspects from 1945 to 1865 and the post-Civil War period, and the film suggests that war, its destructive effects are the same, as some men never recover from its aberrant conditions, where killing is presented as morally and socially acceptable. 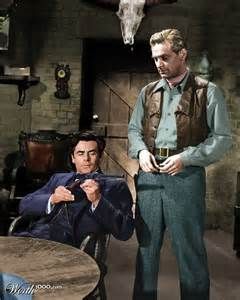 Ray Collins will be familiar to many people as Detective Tragg from the “Perry Mason” TV series (1957-1966), but he had a long career in stock and Broadway theatre, radio, films, and television. Along with 900 stage roles and more than 75 films to his credit, he was one of the most successful actors in radio drama. Ray Bidwell Collins was born on December 10, 1889 in Sacramento, California. His father was a newspaper reporter and dramatic editor for The Sacramento Bee. His uncle Ulric Collins inspired him to become an actor after Ray saw him perform in a Broadway production of “Way Down East”. Ray Collins made his stage début at age 13 at the Liberty Playhouse in Oakland, California.

In 1914, at age 25, Ray Collins and his first wife, Margaret Marriot, moved to Vancouver, where he worked as an actor in stock companies. He formed his own stock company and worked for five years out of the Empress Theatre in Vancouver. He toured in Vaudeville and ended up in New York City, where he began to work in Broadway theatre productions, his first being Conscience, in 1924. He worked continuously in Broadway plays and other theatrical productions until the Great Depression began. It was then that he began a prodigious career in radio. His first radio job was with the repertory cast of The American School of the Air, where he met Orson Welles. He also worked with Agnes Moorehead, Everett Sloane, Paul Stewart, and others who would soon form the core of Welles’ Mercury Theatre. Along with other Mercury Theatre players, Collins made his feature film début in Citizen Kane (1941) and appeared in Welles’ second film, The Magnificent Ambersons (1942). In 1958, he had a supporting role in A Touch of Evil, also directed by and starring Orson Welles. For the most part, Collins spent the rest of his career in his native California. He appeared in over 75 major films, including Leave Her to Heaven (1945); The Best Years of Our Lives (1946); Crack Up (1946); A Double Life (1947); The Bachelor and the Bobby-Soxer (1947); and The Man From Colorado (1948). He also appeared in two films of the Ma and Pa Kettle series: Ma and Pa Kettle Back on the Farm (1951) and Ma and Pa Kettle on Vacation (1953); in both films, he appears as the Kettles’ son Tom’s father-in-law.

On TV, Collins was a regular in “The Halls of Ivy”, starring Ronald Colman, with whom he appeared in the film A Double Life. His other TV credits include many of the anthology series of the 1950s. He had featured roles on “Lux Video Theatre”; “You Are There”; “The 20th Century Fox Hour”; “Zane Grey Theatre”; and many others. In 1957, he joined the cast of the CBS-TV series “Perry Mason” and gained fame as Los Angeles police homicide detective Lieutenant Arthur Tragg. He appeared regularly from the series’ beginning in 1957 to midway through the 1963-64 season. His health began to fail, at that time, and he began to have trouble remembering his lines. He filmed his last episode in 1963, but the executive producer, Gail Patrick, kept his name in the credits because she knew that he watched the show every week. On July 11, 1965 Collins died of emphysema at St. John’s Hospital in Santa Monica, California, at age 75. He is interred at Forest Lawn Memorial Park in the Hollywood Hills of Santa Monica, California.