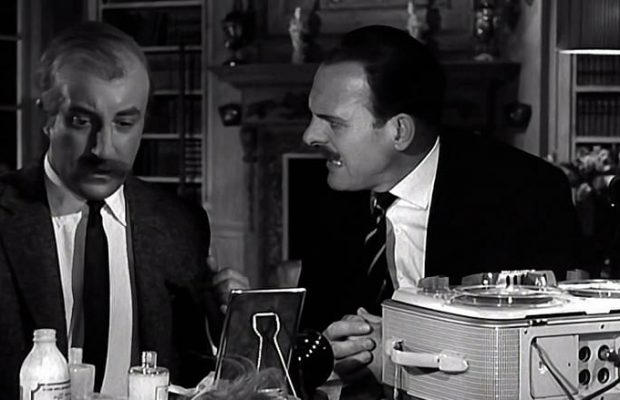 Toronto Film Society presented The Naked Truth [aka Your Past is Showing] (1957) on Monday, February 29, 1988 in a double bill with This Man Is News as part of the Season 40 Monday Evening Film Buffs Series “B”, Programme 5.

Ultra-sophisticated, suave newspaper publisher Dennis Price (Nigel Dennis) threatens the exposure of private lives of prominent citizens in a new scandal magazine.  Four respectable citizens–a novelist nominated for a purity award (Peggy Mount); a multi-character TV entertainer (Peter Sellers); a peer in insurance (Terry-Thomas); and a model (Shirley Eaton)–are separately determined to bump this paper villain off.  As the film title may suggest, subtle humour surrenders to visual gags bordering on slapstick, “relying more on the sledge hammer than the rapier for its effects” (Variety, 1954).  Bungled attempts to bomb, drug or drown the misfit journalist bombast the screen before Price is prematurely arrested for similar threats against some further 300 victims.  Convinced no evidence shall be given at trial to implicate the four stars, they jointly snatch the crook from jail and deposit him somewhere in the Mid-Atlantic on an ocean liner.  Needless to say, the novelist’s failed attempt to pull off a trunk murder mystery case on board ship adds to the labyrinth of ludicrous situations at the hart of the plot of this well-made farce. 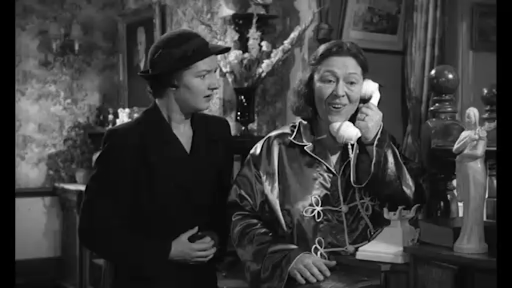 Mario Zampi, director, maintains an unerring eye for the comic situation, minimizing the effects of dialogue to achieve a knockabout farce of scandal journalism.  Born in Italy and emigrating to England to join Warner Bros. as film editor in 1922, Zampi was a co-founder of Two Cities Films in 1937 where he produced, wrote and directed a number of hilarious comedies in the 1950s, most notable Laughter in Paradise (1951).

Vintage Terry-Thomas, the moustached, gap-toothed upper crust gentleman, in this evil comedy lead is a must see as a ferocious peer willing to protect his honour at any cost–even murder.

Peter Sellers, new to British cinema screens in the 1950s, adds impersonations of a wide range of characters.  Peggy Mount fairly crackles in this deadly little yarn as the murder mystery writer with a passionate incline to kill.