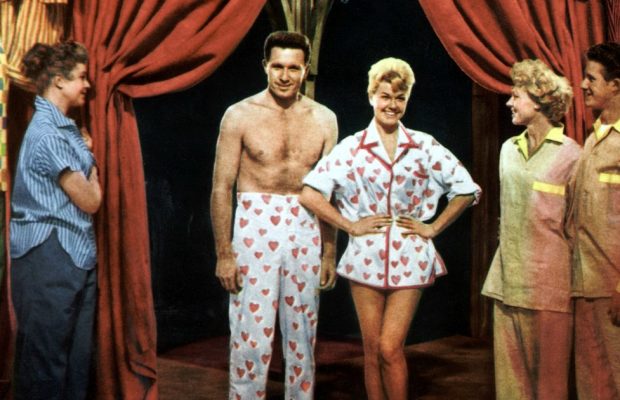 Toronto Film Society presented The Pajama Game (1957) on Sunday, April 28, 2019 in a double bill with Damn Yankees as part of the Season 71 Sunday Afternoon Special Screening #10. 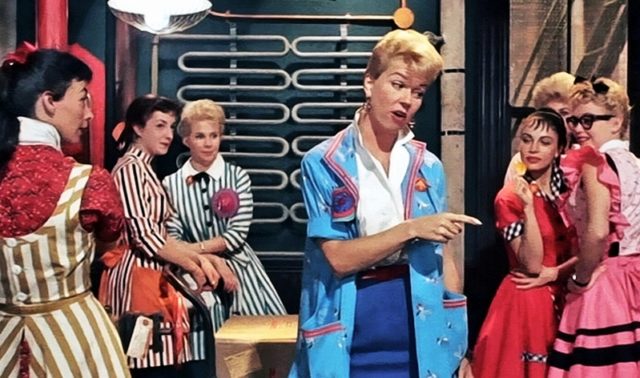 This film, like most other Hollywood productions of hit Broadway shows, replaced a principal stage actor with a popular movie actor; in this instance, Doris Day replaced Janis Paige as the female lead. The play and the film are both based on the 1953 novel “7½ Cents” by George Abbott and Richard Bissell. The play and the film were written by George Abbott and Richard Bissell, and the music and lyrics were done by Richard Adler and Jerry Ross. One of the songs—Hey There—has been recorded and released many times over the years by such notable singers as Rosemary Clooney, Bing Crosby, Sammy Davis Jr., Johnnie Ray, Peggy Lee, and Sarah Vaughan. Even Canadians Anne Murray and The Spitfire Band recorded Hey There.

Another song made popular by the play and the film is Steam Heat. The song introduced Bob Fosse’s signature style of choreography to the theatre. Dancer Carol Haney originated the role of Gladys in the stage version and also performed the number in the film. Shirley MacLaine was Haney’s understudy during the play’s run and later used the song in her nightclub act. Film producer Hal Wallis came to see Haney in the stage version of The Pajama Game, but she had injured herself in a previous matinée. Shirley MacLaine played the role of Gladys that Wallis saw; he signed her to a film contract and launched her career with her first film role—in the quirky Alfred Hitchcock film The Trouble with Harry (1955).

Carol Haney was acknowledged as being one of the best dancers and choreographers working on Broadway and film at the time. She worked with Gene Kelly choreographing for films including On the Town (1949), Summer Stock (1950), An American in Paris (1951), Singing in the Rain (1952), and Invitation to Dance (1956). She danced with Bob Fosse in the film version of Kiss Me Kate (1953) and he recommended her for the role of Gladys in The Pajama Game on Broadway, for which she won a Tony Award (Best Performance by an Actress in a Featured Role in a Musical) and two Donaldson Awards (Supporting Actress—Musical and Female Dancer). Haney went on to earn three Tony Award nominations for her stage choreography: Flower Drum Song, Bravo Giovanni, and Funny Girl (posthumous). Her television credits include The Polly Bergen Show and What’s My Line? Haney was a talented dramatic actress, as well, which she showed in a number of stage productions. She played the role of Lila in William Inge’s A Loss of Roses, along with Warren Beatty. Unfortunately, she was passed over for the role in the film version. Her main focus had always been choreography on Broadway shows, anyway. She continued in this up until her death at age 39, from pneumonia complicated by diabetes and alcoholism—just six weeks after the opening of Funny Girl.