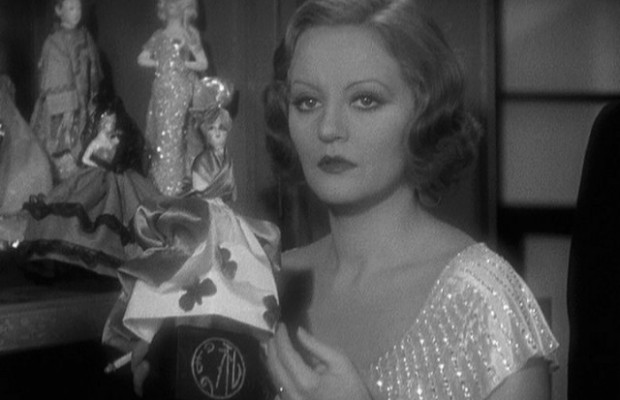 Toronto Film Society presented The Cheat on Friday, May 10, 2013 as part of Season 66 May Festival: The Pre-Code Weekend.

How could we not show a Tallulah Bankhead film?  This is a remake of Cecil B. DeMille’s 1915 film starring Sessue Hayakawa, which TFS showed when they had a Silent Series, and the 1923 film starring Pola Negri.  George Abbott is credited as the director but apparently had to relinquish his duties midway through the production when his wife became ill.  I don’t know who else contributed to the direction.  I look forward to seeing this film for the first time along with you.

Whatever else is thought of it, ‘The Cheat’ makes no pretense.  It’s commercial melodramatic hoke, laid on good and thick and with a dressing of luxurious and fashionable locale.  Will get spoofs from

the sophisticates, but possibly attention from the rank and file of fandom.  It all seems to hang on Miss Bankhead, who has yet to be accepted by filmgoers at large.  Its chances are not good.

Picture hasn’t a ghost of an artistic aim, but it provides thrills for the naïve and goes about that candid mission with a good deal of directorial and production skill.  Picture will need selling in the deluxes, but for the splits, major and minor, it should sustain itself.

Straightforward melodrama is lavishly, almost prodigally, done as to swank Long Island locale of the wealthy.  The clothes are voluptuous and the whole thing is extremely toney.  Technique is of the strong-arm sort.  The thrills are all make believe, but because of their theatrical vigor they register.  No finesse or subtlety, but a heroine and a villain who pursues her; situations flamboyantly built, but trickily nursed along to climaxes give it a certain suspense, even if you do know a bit early what is going to happen.

Something of an ancient complexion clings to the story about the butterfly wife who loses $10,000 in a gambling club and, to keep the truth from her husband, speculates with funds of a charity business in her temporary care.  Of course, she loses in the market and in desperation accepts a check from the heavy, a mysterious traveler just back from the Orient who don’t mean right by our Nell.

Plot thickens when she obtains the money from her husband and makes a rendezvous to return it to her pursuer, only to be forced to shoot him in defense of her honor, as they say.  It builds to a theatrical climax in a courtroom scene wherein the husband, who takes upon himself guilt of the near-slaying, is about to be convicted and the wife confesses all to free him.

Miss Bankhead more than most actresses has a knack of fitting into these prodigal locals with plausibility.  She is at least an actress of elegance and that suffices for this story indeed.  Sessue Hayakawa played the heavy role in the original silent, and probably was more to the point than the present incumbent, Irving Pichel, although he does manage to get across the essential feeling of sinister purpose.  Harvey Stephens turns in an intelligent, manly performance as the pale husband role.

Photograph is notably fine, particularly a sequence on a moonlit beach before the yacht club with gay young people bustling about a boat landing with the camera played for interesting angles.

THE CHEAT, based on a story by Hector Turnbull; directed by George Abbott; produced by paramount Publix; adaptation by Harry Hervey; cameraman, George Folren.

Strikingly beautiful photography, faultless recording, able direction and the presence of the handsome and talented Tallulah Bankhead make “The Cheat,” that old Pineroesque story of Hector

Turnbull’s, a most satisfactory production.  It is gratifying to observe that Miss Bankhead, who has been somewhat unfortunate with her previous screen vehicles, at last appears in one that really merits attention.  And she is not alone in the matter of good acting, for she is supported by the efficient work of Irving Pichel and Harvey Stephens.

George Abbott guided the destinies of this picture, which is now at the Paramount.  His scenes are extraordinarily compelling, what with pleasing shadows and high lights and expensive settings.  Miss Bankhead is also photographed to better advantage than in her other films.  She impersonates Elsa Carlyle, who in the course of this chronicle loses $20,000 at gambling at cards and on the stock exchange, and after being compromised in a savage fashion by Hardy Livingstone, an immensely wealthy collector of Oriental art objects and costumes, she shoots him.  He, however, lives to do his worst by false testimony in the trial of Elsa’s husband, Jeffrey, who persists in saying that he, and not his wife, shot Livingstone.

It is no masterpiece as a drama, but it captivates one’s attention.  Mr. Pichel gives an excellent conception of the sadistic Livingstone, who delights in branding all that he owns with his crest, even women who, like Elsa, fall victims to his ample funds.  The loyal husband, Jeffrey, also is finely played by Mr. Stephens.

One of the several dramatic sequences is where, after losing $10,000 at cards, Elsa, who is custodian of money received for charity, decides to peculate $10,000, with the hope of making good her

losses, by taking advantage of a tip on copper.

There is the joyous moment of the husband when he comes home and announces to Elsa that they are rich, for the deal he has just consummated means that they are worth a million.  The malignant Livingstone, who has loaned Elsa the $10,000 to save herself from disgrace, insists on her coming to his abode that evening.  She asks her husband for the money she wants without telling him that Livingstone had loaned it to her and Jeffrey gives her a check.  Livingstone, however, is so great an admirer of Elsa that he insists that the transaction was not a loan but a gift.

It is a well-developed tale of its type, nevertheless another one of those pictorial dramas that will make those who dwell on Long Island wonder where all these things happen.