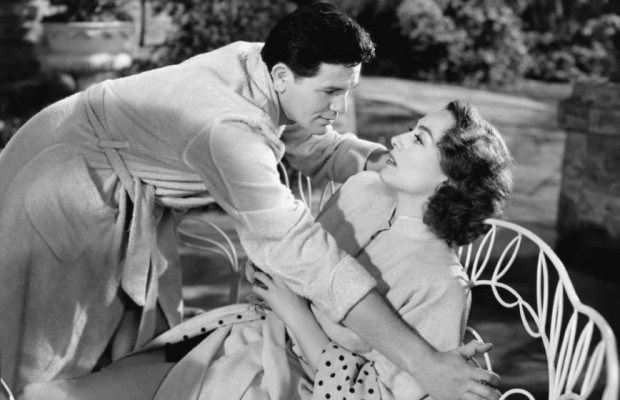 This beautiful remake of the 1920 film directed by the already very experienced 27 year old Frank Borzage is not only a joy to watch, but also to listen to.  Enjoy John Garfield’s fabulous “finger sinquing” to Issac Stern’s violin playing.  This film will be raffled off. – Caren Feldman

“Humoresque” combines classical music and drama into a top quality motion picture.  A score of unusual excellence gives freshness to standard classics and plays as important a part as Fannie Hurst’s familiar story of a young violinist who rises to concert heights from the lower East Side of New York.  Technically a remake (it was first produced in 1920) this version is virtually a new story, stripped of any racial connotations as was the case originally.

Picture is of the caliber to attract lush boxoffice in the top situations.  It has the name strength of Joan Crawford and John Garfield to brighten marquees, thoughtful production guidance by Jerry Wald and strong direction by Jean Negulesco.  Footage is long, running more than two hours, but does not drag because of the score potency and performance quality.

Integration of music and drama ties the two together so tightly there is never a separation.  Classical lovers will hear special arrangements of such favorites as the orchestral suite from “Carmen,” in which the violin becomes the vocal solo instead of the usual voice, and a smash violin solo of “Liebestod” from “Tristan and Isolde.”  Other musical standouts include the gypsy “Zigeunerweisen,” another violin solo.  Isaac Stern, violin virtuoso, acted as music advisor and dubbed the violin for the score, while Franz Waxman did the special Some 23 classical numbers are included, plus a number of pop pieces used as background for café sequences.  Latter are played and sung by Peg LaCentra to good effect.  Full symphony of 110-pieces is used for much of the recording and large viola section is used, to back the “Carmen” melodies.

One of her best moments is the suicide scene in which she walks into the sea to the accompaniment of “Liebestod.”  It is an intense, dramatic moment, heightened by the stirring violin solo with full orchestral backing.

Oscar Levant’s character of Sid Jeffers, Garfield’s friend and accompanist, is a thinly-concealed Levant.  He’s in for quips, safe advice and generally to lighten the heavy dramatics.  It is a good part, well done.  J. Carrol Naish and Ruth Nelson contribute excellently as Garfield’s parents.  Tom D’Andrea and Peggy Knudsen have small er spots as brother and sister.  Minor romance is contributed by Joan Chandler.  Garfield as a boy is skillfully performed by Bobby Blake.  Paul Cavanagh, Richard Gaines, John Abbott and others are capable.

Clifford Odets and Zachary Gold gave Jean Negulesco a solid screenplay as basis for his strong direction.  The careful production guidance by Jerry Wald as made a potent combination of music and drama to please the carriage trade, making each phase thoroughly effective in carrying out the class imprint.  Lensing by Ernest Haller is fine, as are other contributions.

HUMORESQUE, screen play by Clifford Odets and Zachary Gold, based on a story by Fannie Hurst; directed by Jean Negulesco; produced by Jerry Wald; a Warner Brothers-First National Picture.

According to definition, the word humoresque signifies a humorous production, especially a musical one. But there is certainly nothing humorous about the lachrymose “Humoresque,” which the lately symphonic Warner Brothers delivered to the Hollywood yesterday. It is rather a mawkish lamentation upon the hopelessness of love between an art-dedicated violinist and a high-toned lady who lives for self alone. And whatever meagre resemblance it may have to reasonable life in the world of working musicians (aside from Oscar Levant) is merest luck.

Apparently the latter-named gentleman with his painfully artificial wit and his Groucho Marx style of delivery is an occupational hazard to which musical people are subjected. At least, they are in some Warner Brother films—and the only distinction in this case is that there is more of Mr. Levant and it is worse. But the rest of this rags-to-penthouse fable in which a lower East Side boy makes good while an upper East Side girl makes trouble is mostly unadulterated schmaltz—a word of obese connotation, introduced by Mr. Levant.

However, the Warner Brothers have wrapped this piteous affair in a blanket of soul-tearing music which is supposed to make it spiritually purgative. They have padded it out with long passages from symphonic scores by Bizet, Rossini and other masters, most of it scored for violin. And, for the smashing, titanic, climax, in which Joan Crawford wabbles out, soused to the ears and heaving, to cast herself tragically into the sea after a telephone conversation with John Garfield, who has told her that he loves his fiddle more, the music that cries and crashes is the Liebestod from “Tristan und Isolde.”

The music, we must say, is splendid—and, if you will only shut your eyes so that you don’t have to watch Mr. Garfield leaning his soulful face against that violin or Miss Crawford violently emoting (“She’s as complex as a Bach fugue,” Oscar says), and if you will only shut your ears when folks are talking other such fatuous dialogue, provided by Zachary Gold and Clifford Odets, you may enjoy it very much. We offer no recommendation to any other part of it, save one slick and incidental rendition by Peg LaCentra of “I Guess I’ll Have to Change My Plan.”

Related ItemsHumoresque (1946)Jean NegulescoJoan CrawfordJohn Garfield
←Previous I Walk Alone (1948)
Next → A Girl, a Guy and a Gob (1941)