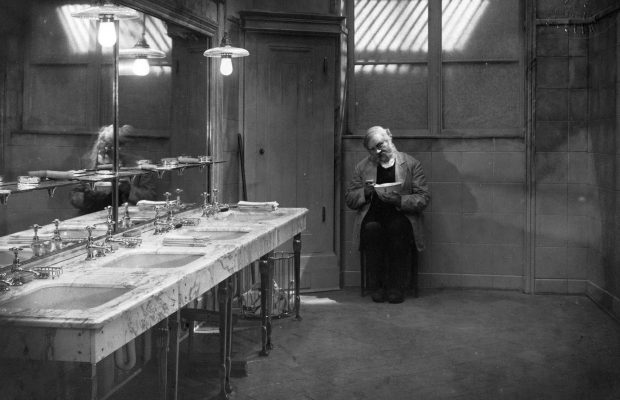 The plot of this Hamlet was drawn from Danish history as recorded by Saxo Grammaticus in the 12th century; from Fratricide Punished, a German drama possibly based on a lost pre-quarto Shakespearean version; and from the Shakespearean play as we know it–but the denouement, revealing Hamlet as a woman, was dervied from Edward P. Vining’s The Mystery of Hamlet, from which the scenarist drew both his characterization of Hamlet and sseveral incidents not in any other source  The direction was mixed in style: outdoor scenes were “romantic in feeling and free in treatment” but interior scenes were more stiffly composed in the tradition of German studio architecture, predicting the settings for Fritz Lang’s Siegfried (1923).  Asta Nielsen, a famous actress of the day, is best known for her role in Pabst’s Joyless Street.  Of her work in Hamlet one critic wrote: “Overintellectual and overliterary in her interpretation, she tried to register a concept of which the motion picture is hardly capable”.

Many pictures have been called “milestones in film history”; one of the few really deserving the term is The Last Laugh because it was revolutionary in its use of the camera.  As Griffith was the first to use closeups and editing creatively, Murnau and his cameraman (apparently inspired by Carl Mayer, the exceptionally cinematic-minded scenarist) in this film employed the moving camera more imaginatively and significantly than ever before, not simply as a sensitive instrument to record events but as an active participant in them–following the old doorman along corridors and streets, through doors and windows and around corners like a living organism; at times subjectively portraying his emotions of elation or sorrow, seeing the world as he sees it.  With the aid of the eloquent face and body of Emil Jannings, the camera in fact tells the whole simple story–no subtitles are used as none are necessary.  (There were other unsubtitled silent features, but not many.)  The Last Laugh too was an unusually felicitous and unhampered job of team-work by its director, scenarist, cameraman, star and its producer, Erich Pommer.  Though it created a critical sensation in America and became an “art-house” standard, it was not popular with the general public (Robert E. Sherwood, then film critic on the old Life magazine, one week ran a four-word “capsule review” of it that read simply “The public be damned!”).  But it (and the more sensational, more widely distributed and commercially successful Variety with the same star and cameraman) had a tremendous influence on Hollywood (particularly Paramount Studios) which imported many German stars, directors and technicians and embarked on an enthusiastic orgy of camera virtuosity, sometimes but not always to good purpose.  I remember a camera busily trailing Bebe Daniels from room to room while plying her trade in The Manicure Girl, for no especial reason than to display the new mobility.  Erich Pommer was brought over to “supervise” several of Jannings’ and Pola Negri’s American pictures, and the work of solidly American or English directors suddenly took on a suspiciously “German look”!  Generally it was a good thing for U.S. films and was effectively employed until the arrival of the static early talkies brought it to a dead halt–though fortunately before too long, directors like Lewis Milestone (All Quiet on the Western Front) startled and relieved us all by starting to make movies again.

Much has been written about the cheerful epilogue Murnau added after the appropriately tragic ending of the story proper.  Some scribes claim that he was forced to tack it on as a sop to public taste; others say it was meant as a satire on Hollywood happy endings.  Be that as it may, and totally unbelievable and out-of-key with the main body of the film as it undoubtedly is, nevertheless it is so engagingly staged, almost in a Chaplinesque manner, that I for one find it most difficult to be severe  with it!  If as one writer suggested, it is a “sneer” at American endings, it is the most charming sneer I’ve ever encountered.

Remarks by the Cameraman:

“In the 2 1/2 months of preparation on The Last Laugh, Carl Mayer conferred every day with at least one of us–Murnau, the designers, Pommer, Jannings or me.  It was out of this teamwork that all the innovations on the film evolved.  I remember the first words that set the camera into motion.  Mayer asked me: ‘Karl, is there any way to film a person’s head, first in a medium shot, and then move in to a great closeup of the eyes alone?’.  This was for the moment when the aunt discovers Jannings has been demoted to lavatory-attendant, and it was his reaction to her discover Mayer wanted to heighten.  ‘I guess you’d have to mount the whole camera apparatus on a wheeled platform of some sort.’  Mayer immediately understood the possibilities and the entire scrip was revised with camera movement.  Since wheels were useless for the above scene (the aunt looked down on Jannings from the top of a flight of stairs), we used a fire-ladder, built in sections raised or lowered with a crank, for a descending approach to Jannings’ face; we mounted the camera on its top and chose our smallest camera-assistant to sit by it to adjust the focus.  For the trumpet shot, we suspended the camera in a basket from a bridge that ran the length of the courtyard; when our pulley couldn’t manage the upward movement of the camera-basekt, we made the shot downwards and reversed the film in the camera.  When the film had to be a drunken Jannings, I strapped the camera to my chest, with batteries on my back for balance, and played drunk!  For the opening shot, my camera and I sat on a bicycle in the descending elevator, and rode out through the opened elevator-door across the lobby and through the revolving doors.  Mayer’s imagination had convinced us we could do anything!”

A “Socio-political Interpretation” by Siegfried Kracauer:

“This powerful film contrasts two buildings: a gloomy tenement-house crowded with lower-middle-class people, and a palace hotel for the rich–yet it shows the two social spheres united by strong ties; the old porter not only ushers the guests through the revolving door, he offers candies to the children in the tenement-house yard where he lives.  The tenants are awed by his uniform which seems to confer a mystic glamour on their modest existence.  They revere it as a symbol of supreme authority.  Thus the film advances, however ironically, the authoritarian credo that the magic spell of authority protects society from decomposition.  Therefore the fall of the uniform representing authority is bound to provoke anarchy.  Learning of the ignominious white blouse of the now lavatory-attendant, the tenants feel alienated from that upper world with which they communed through the uniform.  They resent being socially abandoned and thrown back into the gloominess of their flats and their souls.  All evil lower-middle-class instincts are unleashed against the porter; who, instead of maturely putting up with his plight, falls into a self-pity tantamount to complete self-renunciation.”

Footnote:  My hometown of Winnipeg, where many bizarre things happened to films, gave an interesting reception to The Last Laugh–a first-run theatre, whose current attraction was Elinor Glyn’s Soul Mates, showed Murnau’s masterpiece at noon and midnight only, announcing that any takings over the average would be donated to the Winnipeg Tribune Empty Stocking Fund!