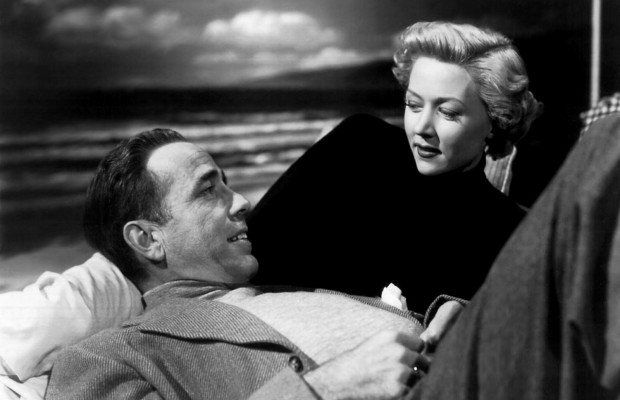 Toronto Film Society presented In a Lonely Place on Saturday, May 12, 2012 as part of Season 65 May Festival: The Dead Men Don’t Wear Plaid Weekend.

Humphrey Bogart, as a temperamental, fistic-loving screenwriter, generates “In a Lonely Place” into a boxoffice winner.

In “Lonely Place” Bogart has a sympathetic role though cast as one always ready to mix it with his dukes.  He favors the underdog; in one instance he virtually has a veteran, brandy-soaking character actor (out of work) on his very limited payroll.  His friendliness for this pushed-around individual even extends to going to his rescue with his fists.

As the screenplay scrivener, who detests the potboilers, Bogart finds himself innocently suspected of a girl’s slaying.  Although continually kept under suspicion, he ignores the police attempt to trap

him into a confession, at the same time falling for a gal neighbor.  It is these police maneuvers that ultimately blast the romance just as Bogart is about to be married, which doesn’t create an audience-pleasing ending.

Andrew Solt’s screenplay makes for forceful drama while Edmund R. North has made a faithful adaptation of Dorothy B. Hughes’ story.  Burnett Guffey has done well with the camera.  Editing by Viola Lawrence is another intelligent job.

Everybody should be happy this morning. Humphrey Bogart is in top form in his latest independently made production, “In a Lonely Place,” and the picture itself is a superior cut of melodrama.

Playing a violent, quick-tempered Hollywood movie writer suspected of murder, Mr. Bogart looms large on the screen of the Paramount Theatre and he moves flawlessly through a script which is almost as flinty as the actor himself. Andrew Solt, who fashioned the screen play from a story by Dorothy B. Hughes and an adaptation by Edmund H. North, has had the good sense to resolve the story logically. Thus Dixon Steele remains as much of an enigma, an explosive, contradictory force at loose ends when the film ends as when it starts.

Because Mr. Solt did not compromise to fabricate a happy ending the climax packs both surprise and a punch. Although Steele is callous, insulting and vicious in his dark, ugly moods, he can be tender and considerate under the influence of love and has a deep, spontaneous affection for a broken-down old star who is aglow with brandy and Shakespeare. Mr. Bogart plays the role for all its worth, giving a maniacal fury to his rages and a hard edge to his expressions of sympathy.

Mr. Solt lets go with a few sharp barbs at the dynasty system in movieland in the course of involving Dixon Steele in the murder of a hatcheck girl and a torrid romance with a satiny blonde neighbor whom he meets formally in the Beverly Hills police station. Steele is suspected because he was the last one to see the victim alive and the police just won’t accept his story that he dated the girl and took her to his house simply because she had read a book he had been asked to write into a screen play. His reasoning was simple; why waste time reading a book he might not like if somebody could give him the plot in half the time?

The police won’t buy that one, but Laurel Gray “buys” the scenarist. Theirs is a hectic romance under constant police surveillance with the high-strung Steele flying into rages which gradually frighten

Laurel and lead her to believe that the police may not be so far wrong after all. We won’t, of course, go any deeper into the story, but through it all Steele has the arrogance of a brilliant creator of fiction murder who sneers at the bafflement of the police.

Mr. Solt in shaping the character of Steele makes no attempt to psychoanalyze him and neither does Mr. Bogart in his performance, but the actor plays with such terrific drive that one is content not to pick the characterization apart. Gloria Grahame gives a smoldering portrayal of Laurel; Robert Warwick is expansive in a wonderfully Smithfieldian way as the fallen star, and several lesser roles are well played by Frank Lovejoy, Carl Benton Reid, Art Smith, Jeff Donnell, Martha Stewart and Hadda Brooks, as a torch singer. Mr. Bogart had a good team, marshalled by Director Nicholas Ray, and the result is that “In a Lonely Place” comes off a dandy film.