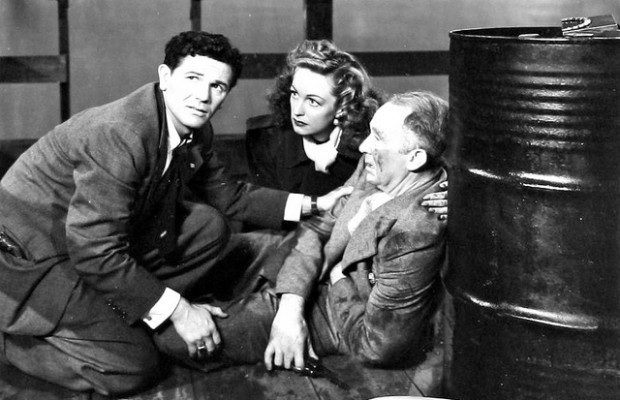 Toronto Film Society presented Nobody Lives Forever on Monday, March 31, 2014 in a double bill with Cause for Alarm! as part of the Season 66 Monday Night Film Buff Series, Programme 7.

Former con man Nick Blake, discharged from the US army after World War II, contacts his old girl friend Toni Blackburn to collect the money she had been holding for him while he was in the army, but she claims that the money has ended up with her current boyfriend Chet King. Nick recovers the money and leaves New York for Los Angeles, where he meets

another old acquaintance and con man, Pop Gruber, and is persuaded by him and an associate Doc Ganson, to make advances to a rich widow, Gladys Halvorsen, and swindle her out of her inheritance. Nick agrees, but falls in love with the intended victim.

Bosley Crowther of the New York Times found the film “craftsmanlike” but otherwise predictable with clichéd dialogue and “nothing original in the easy solution of the plot.” A more recent assessment in the London edition of Time Out judged it “predictable but well acted…with a memorable finish on a fogbound pier in which the radiantly beautiful Fitzgerald, kidnapped by jibberingly psychotic Coulouris, seems somehow to transcend her oil-stained surroundings.”

Born Jacob Garfinkle to Jewish parents in Manhattan’s Lower East Side, he grew up in extreme poverty in the heart of the Yiddish Theater District. His mother died when he was young and his father remarried, but Garfield was primarily a street kid and gang leader who was a poor scholar and whose school attendance was erratic, causing him to be expelled several times and sent to a school for difficult children. Here he was introduced to acting by the principal and a charismatic teacher name Margaret O’Ryan, who recognised and nurtured his talent. With their encouragement he took acting lessons and joined the American Laboratory Theater, founded by former members of the MoscowArtTheater who had introduced the Stanislavsky “system”, where he encountered Lee Strasberg, Franchot Tone, and others, and made his Broadway debut in 1932. Former colleagues from “the Lab” had moved on to establish a new theatre collective called “the Group”, which he was finally invited to join, and he obtained recognition there for his role in Clifford Odets’ drama Awake and Sing. But, disappointed at not receiving a promised role in Odets’ Golden Boy, he decided to follow up offers from Hollywood that he had previously ignored and signed a seven year contract with Warner Brothers, who changed his name to John Garfield. His first major role was in Four Daughters in 1938 and this brought him a nomination for an Academy Award as Best Supporting Actor, after which his status dramatically increased, though he soon, like other stars of the period, refused to accept the unchallenging roles offered him and endured frequent suspensions. He attempted to enlist in the army for World War II, but was rejected because of a heart condition, and instead devoted himself to entertaining and supporting servicemen, and appearing in patriotic films such as Pride of the Marines. His career revived after the War with The Postman Always Rings Twice, Humoresque, Force of Evil, We Were Strangers and Body and Soul among others. But his strongly liberal beliefs attracted the attention of the House Committee on Un-American activities and he was summoned to appear before it and asked to name Communists in the film industry. He refused to do this and was blacklisted as a result and denied future employment in Hollywood. He returned to work in the theatre, but fell suddenly ill and died of heart disease, possibly aggravated by the stress of his blacklisting,  at the age of 39. His funeral was attended by over ten thousand people (the largest since the death of Rudolph Valentino) and, shortly afterwards, HUAC announced that he had been cleared of all suspicions.

His acting style was described by his biographer Lawrence Swindell as: “Garfield’s work was spontaneous, non-actory; it had abandon. He didn’t recite dialogue, he attacked it until it lost the quality of talk and took on the nature of speech….Like Cagney, he was an exceptionally mobile performer from the start of his screen career. These traits were orchestrated with his physical appearance to create a screen persona innately powerful in the sexual sense. What Warners saw immediately was that Garfield’s impact was felt by both sexes. This was almost unique”

Regarded as one of the finest character actors in movie history, his parents were Irish immigrants and Walter studied engineering (his father’s profession) before becoming interested in acting. He served in the US army during World War I and, after losing most of his money in real estate investments in the crash of 1929, he turned to acting as an extra and stunt man

before receiving more substantial roles in the late 1930s. He lost many teeth in a 1932 accident and this, combined with thinning hair and his characteristic voice made him appear much older than he really was. He was usually cast as the devoted but often grumpy sidekick to the main protagonist, as in Sergeant York, To Have and Have Not and Rio Bravo, but had more significant and less sympathetic roles as Judge Roy Bean in The Westerner and “Old Man” Clanton in My Darling Clementine. He worked extensively for both ABC and CBS television in comedy and drama series between 1964 and 1971.

Born in Ireland, she studied painting and theatre in Dublin and London before obtaining small roles in British films in the 1930s and then a starring role in The Mill on the Floss in 1937. This led to stage appearances on Broadway and then a film contract with producer Hal B.Wallis and great success in Wuthering Heights and Dark Victory (both 1939). Disputes with studio bosses disrupted the progress of her career, however, and she left Hollywood for New York in 1946 and then moved to Britain for more film work. She returned to America in the 1950s, with little success at first, but had a career revival with The Pawnbroker (1964) and Rachel, Rachel (1968). Afterwards she combined her film work with stage and television appearances, where she had considerable success in both media and received several awards, before succumbing to Alzheimer’s at the age of 91.

Born in Romania, he worked as a painter and stage designer in Paris in the early 1920s, then went to New York in the hope of finding recognition as a painter there. After years of travelling over much of the United States, he was hired by Paramount in 1932 as a sketch artist and technical adviser before obtaining work as a director for Warner Brothers, first of short films and finally, in 1944, as director of the feature The Mask of Dimitrios, which was highly successful. It was followed by two more films with espionage themes and then Humoresque and Nobody Lives Forever, both starring John Garfield, and Johnny Belinda, a controversial story of rape and murder that was a hit at the box office, but the subject matter led Warners to fire him. He then joined 20th Century Fox, where he made thrillers and war films, before deciding to switch to glossy commercial entertainments such as How to Marry a Millionaire, with Marilyn Monroe, in 1953, and Three Coins in the Fountain (1954). After mixed success in the late 1950s, he moved to live in Spain and to concentrate on his painting, though he also made three more, poorly received, films.

A prolific novelist and screenwriter, mostly of crime fiction, his work was the source of three of the finest Hollywood films featuring gangsters and—usually unsuccessful—criminals: Little Caesar, High Sierra and The Asphalt Jungle. He also worked on the script of Howard Hawks’ 1932 Scarface.