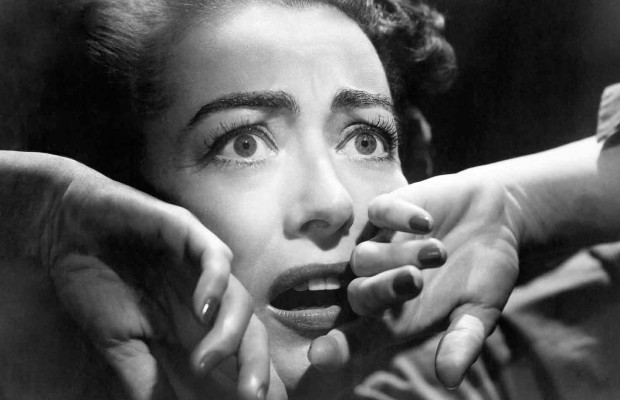 Toronto Film Society presented Sudden Fear (1952) on Monday, May 7, 1979 in a double bill with The Magnificent Ambersons as part of the Season 31 Monday Evening Film Buff Series, Programme 10.

From its initial release almost 27 years ago, Sudden Fear receieved what might kindly be referred to as a mixed critical reception.  As its title suggests, David Miller`s film is a contrived thriller.  In terms of its plot it offers little that is new and in the performances of Joan Crawford and Jack Palance it offers much that is familiar, at times to the point of being virtually cliche ridden.  It has a regretably lethargic opening section presumably intended to suggest something about the personalities of the characters, but fortunately, after the plot begins to unwind, it develops into an almost classical exercise in suspense.  Ultimately, teh fact that the film is contrived in its conception and all too often cliched in its execution is rendered irrelevant by the fact that for most viewers both contrivance and cliche work to the point that at the film`s end they are left limp with sweaty palms from its sustained tension.

By the early 1950s Joan Crawford was well established as an actress with a particular affinity for melodrama and an apparent personal fondness for the kinds of costuming that led her to be described as a clothes-horse.  At least to her fans, Sudden Fear appeared as an almost perfect vehicle for her unique screen presence.  As detailed in the credits, Sudden Fear gave Joan Crawford `gowns by Sheila O`Brien, lingerie by Tula, furs by Al Teitelbaum, and hats by Rex, Inc.`  (Time, August 11, 1952, p. 73).  Sudden Fear also gave her filmic justification for a virtual catalogue of facial histrionics.  Yet it must be remembered that the kind of calculated suspense that Miller intended and largely realized in Sudden Fear has little place for subtlety.  Jack Palance was typecast as the villain of the piece.  The fact that his attempt to impersonate a romantic lead fails is troublesome only during the sluggish opening of the film, after which his special ability to project sinister menace overshadows his deficiencies as a romantic lead.  Undoubtedly the most wildly and justifiably praised role in the film is that of Gloria Grahame in the small part of the truly dangerous woman who is Palance`s `girlfriend`.

Unlike Lonely Are The Brave (1962) which is probably Miller`s major contribution to film, Sudden Fear does not entertain serious thought.  It is to David Miller`s credit, that once the film starts to accelerate, he has the good sense to continue to accelerate it at a pace that does not allow one to reflect on the obvious absurdities involved.  If one discounts the somewhat plodding, utterly unbelievable, opening section of the film, one must appropriately credit David Miller for his effective use of location footage shot in San Francisco and his sharply suspenseful direction of what amount to an extended crescendo of suspense.  The fact that the vocabulary of cinematic devices which he uses is the creation of more famous directors is far less relevant than the fact that he uses it exceedingly well.