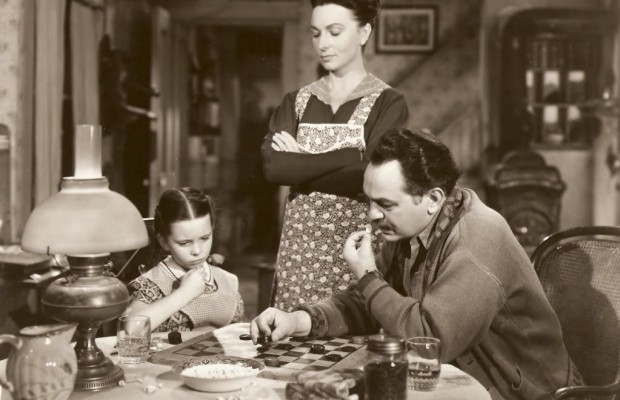 Toronto Film Society presented Our Vines Have Tender Grapes on Monday, September 11, 1978 in a double bill with Father of the Bride, as part of the Season 31 Monday Evening Film Buff Series, Programme 1.

“Community life in a Norwegian farming settlement in Wisconsin is the substance of this charming pastoral called Our Vines Have Tender Grapes.  It would indeed be a cold and distant heart that failed to re spond to the homey philosophy and the tenderly sentimental vignettes of family life which are sketched with loving care and understanding by a knowing group of players in this beautifully made Metro-Goldwyn-Mayer production….

The story’s closing chapter is an eloquent and touchingly simple outpouring of the love in a little girl’s heart for her less fortunate friends and it fills one with a warm glow as the picture fades out on the people of Fuller Junction.  If you can watch Margaret O’Brien’s ecstatic expression without emotion then Our Vines Have Tender Grapes was not meant for you.  While this picture comes close at times to pathos, it is always skillfully rescued from the mawkish either by a line of humorous dialogue, of which Scenarist Dalton Trumbo has contributed several effective samples, or by the adroit handling of these situations by Roy Rowland.  He has clipped many scenes in the nick of time….

Edward G. Robinson is stolid and lovable as Martinius and in this role gives one of the finest performances of his long and varied screen career.  Agnes Moorehead is altogether credible as the mother, and James Craig and Frances Gifford are quite pleasant as the young couple.”

“‘Why did we last?’ reiterated Edward G. Robinson in 1963 to an interviewer who asked about the great generation of stars: ‘Well, they were people before they were stars.  You can have someone new, with a few tricks and a new face and the people will go along with him for a while and then they see through.  To last you need to be real.  Integrity as a person.  And you have to work.  I still work as hard, probably harder, at each role I get as I did at the beginning.  To my mind, the actor has this great responsibility of playing another human being.  It’s a great responsibility, you know, it’s like taking on another person’s life and you have to do as sincerely and honestly as you can.’

He is the least film-starrish of stars.  Small, robust, not handsome, he seldom made the fan magazines.  There has never been a Robinson cult nor has he ever been nominated for an Oscar–which comes, perhaps, of being consistently good and versatile.  His standard of playing is as good as anyone’s, but the reason he has lasted so long at the top (his physique might have fitted him better to supporting parts) is not simply because he’s a fine actor–he is an exciting one.  For much of his career he has had to snarl and rant, but he can be very quiet, very placid.  He has always seemed to have a great understanding of human frailities.  But, as Raymond Chandler said when discussing him and Bogart, he ‘only has to enter a room to dominate it.'”