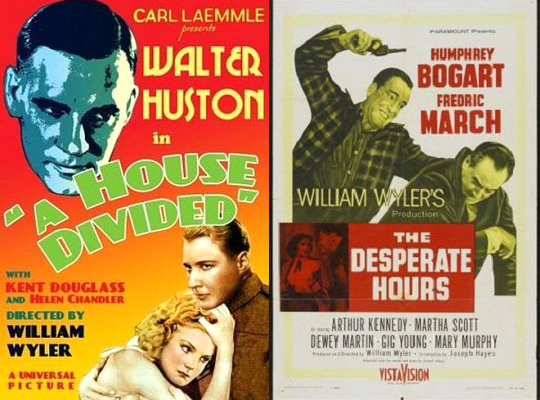 Toronto Film Society presented A House Divided (1947) on Sunday, September 27, 1987 in a double bill with The Desperate Hours (1955) as part of the Season 40 Sunday Afternoon Film Buffs Series “A”, Programme 1. 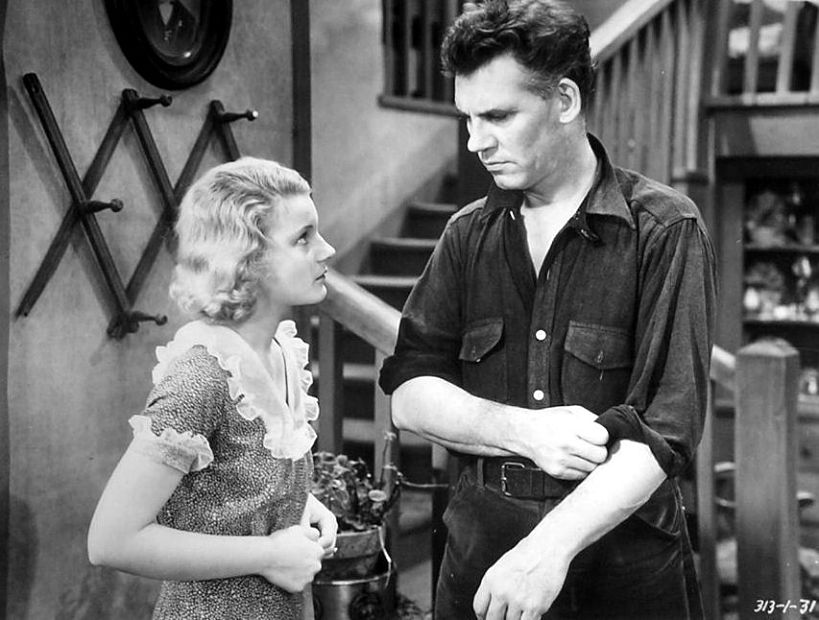 When Irving Thalberg nicknamed William Wyler “Worthless Willy,” after some daring and illegal exploits on a motorcycle had landed the reckless young man in jail for a weekend, he could never have envisaged that the motorcyclist he so dubbed would eventually win the Irving G. Thalberg Memorial Award which is given by the Academy of Motion Pictures Arts and Sciences for consistent high quality of production achievement.  Wyler’s paretns would not have been surprised by Thalberg’s opinion of their daredevil son, for they had encouraged him to go to America to work in the film business with Carl Laemmle, a cousin of Wyler’s mother and the head of Universal Studio, in the hope that this experience would be a settling influence on their son and would aid him in finding a suitable career.  Wyler had recently spent some time in Paris in the clothing business, but while he had some success in it, it did not satisfy him and he returned to his parental home in Alsace Lorraine.  As he showed little interest in his father’s haberdashery business, his mother decided to approach Carl Laemmle who was visiting Europe about the possibility of Wiliam emigrating to America.  Laemmle, who was known for his generosity to his relatives, agreed to take William on as an employee, and within a short space of time the somewhat reluctant William left for America.

In interviews, Wyler has chuckled at Thalberg’s assessment of him, for, during his first years in America, as he worked in various positions in his uncle’s film studios in New York and Hollywood, he did not show the promise that would make anyone predict that he would become one of Hollywood’s most honoured film director.  Perhaps his decision to go to Hollywood, where “the action was,” was an indication that he knew instinctively the path which he should take if he was to achieve some success in the film industry, even though his early tenure in tinsel town, as Thalberg’s remark indicate, reveal a youth bent more on having fun than finding some kind of career.  Wyler seems to have found his niche when he was given the responsibility of directing two-reel westerns which were turned out in one week on a budget of $2,000.00.  At this stage in his career, Wyler had no illusions about making art, but he has indicated how important this apprenticeship system was.  In this assembly line filmmaking, Wyler has pointed out, budding directors learned “the business of movement,” for these formulaic two-reelers consisted almost solely of action.  Yet even within this system, Wyler occasionally received some positive critical notice which indicated that he was a cut above some of his other colleagues in the studio, and this led to his being given the opportunity to widen his horizons and direct more challenging films in other genres.

The films which are being screened this afternoon give us an opportunity to assess this highly regarded director’s work at two different point s in his career.  A House Divided was made a few years after Wyler had gone through the so-called apprenticeship system at a time when even the most seasoned directors were tested by the demands made by the new sound technology.  In contrast, The Desperate Hours was made when Wyler had already proven his expertise as a filmmaker both in the studio system in Hollywood and as a documentary filmmaker attached to the United States Army Air Force.

Despite the interval between the making of these films, there is a thematic link between them, for in both the patriarchal structure of the family is thrown in disarray when outsiders come into the intimate family circle.  Thus the juxtaposition of the two films has rich possibilities for exploring the ways in which Wyler developed his film practice.  Can one see in the earlier film stylistic characteristics which are present in the later film, or are they totally dissimilar?  Can we see, for example, in A House Divided the “compositional grace” which was a hallmark of Wyler’s work?  Is there some indication in this early film of a meaningful arrangement of figures and objects at different planes within the deep space of the film image, a stylistic characteristic of Wyler’s work which some writers have attributed to his collaboration with the cinematographer Gregg Toland?  If such compositions are present in the earlier film, then we might conclude that his collaboration with Toland was fortuitous in that Toland’s expertise at deep-focus photography enabled Wyler to develop further a stylistic device which was already present in this early work?  In addition, the juxtaposition of these two films allows us to consider whether Wyler’s dissatisfaction with the use of expressionistic techniques in A House Divided was truly justified, or should he, despite the negative audience reaction and his own reservations have explored this style of which he felt imposed the director’s vision on the story? 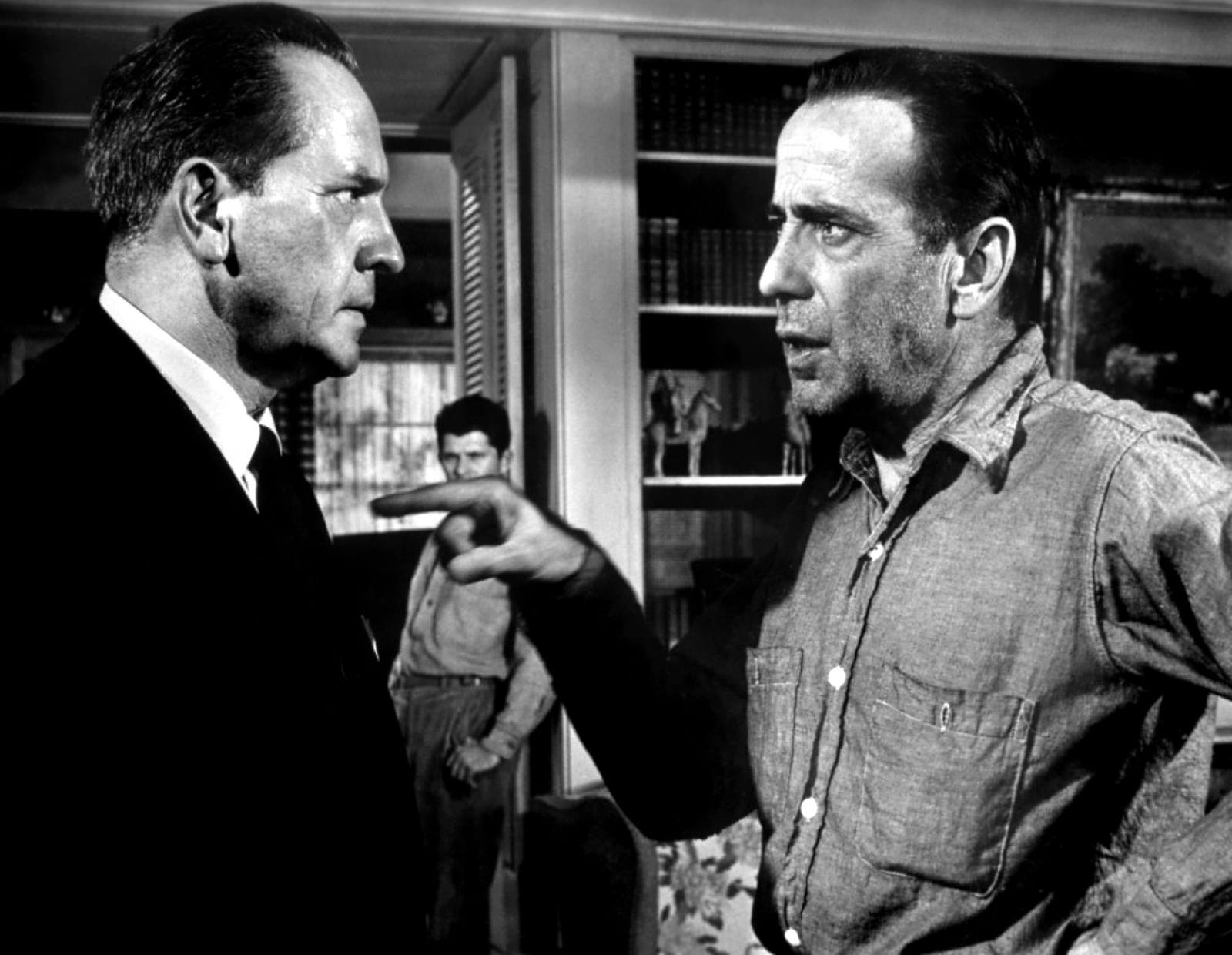 As a result of his experience on A House Divided, Wyler came to the conclusion that the story must dictate the style of the film.  This is the reason why Andrew Arris, an auteurist critic, has in the past ranked Wyler lower on the scale than other filmmakers because in his opinion, Wyler’s films lack the recognizable style needed to designate a director as an auteur.  As we view these films side by side, it is interesting to speculate as to whether The Desperate Hour might have been more dramatically effective if Wyler had chosen a more stylized approach to the script.  Would the drama have been heightened and viewer’s unease increased if Wyler had employed the more shadowy palette we associate with expressionism and film noir instead of the more natural lighting scheme which, as one writer noted, made the Hilliard home seem very like those one saw on television in comedy sitcoms.  Despite the reservations some critics have expressed about Wyler’s visual style or “non-style,” all agree that his direction of the actors in his films resulted in his eliciting from them some memorable screen performances. 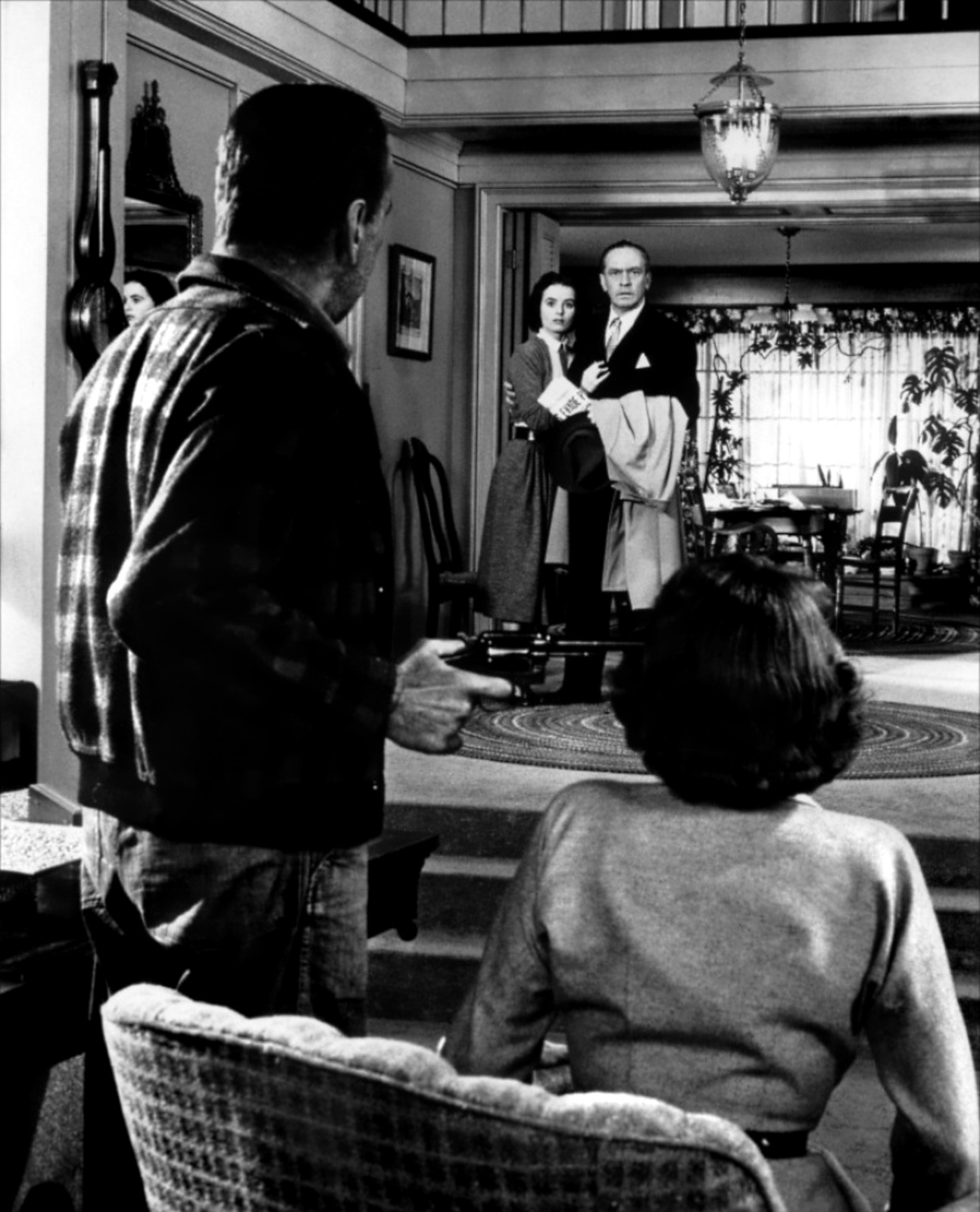 Though he was nicknamed “Ninety-take Wyler” because of his reputation as a perfectionist, the actors who worked in his films recognized and respected his expertise as a filmmaker.  Sir Laurence Olivier, for example, credits Wyler with teaching him about film acting and changing his very condescending attitude toward films.  As a result of Wyler’s tutelage, Olivier began to see the dramatic possibilities of the film medium which led him eventually to assume the mantle of director himself.  Walter Huston who had played the role of Ephraim Cabot in Eugene O’Neill’s Desire Under The Elms was engaged to play the role of Seth Law in A House Divided (the film is cearly a clone of O’Neill’s play which was later adapted for the screen).  His portrayal received rave reviews from contemporary critics, and many writers still regard it as one of Huston’s finest screen performances.  Variety described Seth as “a rough and ready fisherman who likes his liquor straight and his women any way they come.”  Although these comments suggest the portrayal of a sterotype, John Grierson, writing about Huston’s performance, says this was avoided.  Grierson points out that, under Wyler’s guidance, Huston managed to avoid a caricature, and as a result, the audience is brought to have some sympathy for a man who might otherwise be totally repulsive to them.  Critics particularly cite Seth’s crab-like movements through the house after his accident, for they define his bestiality and his desire to be independent at the same time, and this stirs in the viewer contradictory emotions of repulsion and admiration.  Humphrey Bogart who plays the convict, Glenn Griffin, in The Desperate Hours actively sought the role which had been enacted by a young Paul Newman in the Broadway production of the play.  Bogart had worked with Wyler earlier in the film Dead End and he was eager to work again for the director under whom he had given one of his most memorable and chilling performances as a gangster.  In order to accommodate Bogart’s request that he be given the part, Wyler restructured the role so that it suited the older man.  Worn down by the cancer which was soon to take his life, Bogart turned in a performance which the London Observer described as a “formidable piece of frozen savagery.”  Thus in his portrayal of a desperate convict on the lam, Bogart provided a vivid opponent to the husband played by Fredric March.  Variety had high praise for March’s performance and cited it for conveying “with remarkable effect the initial fright and bewilderment and subsequently the cool-minded courage and wisdom that led to Bogart’s defeat.”  Wyler had reservations about both of these films, for he believed that A House Divided was weakened by its expressionistic techniques, while The Desperate Hours was too intellectual and lacked the violence film audiences craved.  Despite his personal feelings, we are fortunate that preserved on film are the remarkable performances of actors who attempted to rise to the standard of excellence set by Wyler.