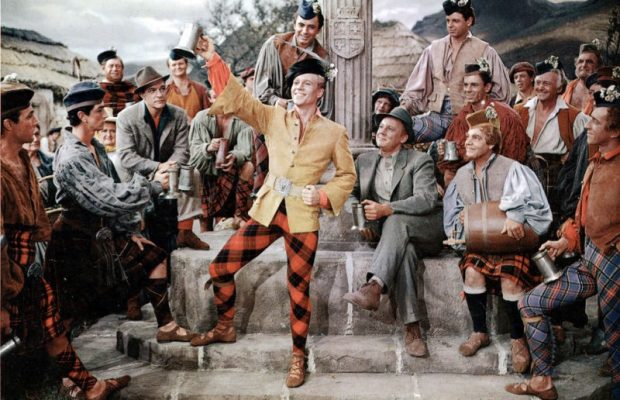 Toronto Film Society presented Brigadoon (1954) on Monday, January 25, 1982 in a double bill with The Great Caruso as part of the Season 34 Monday Evening  Film Buffs Series “B”, Programme 7. 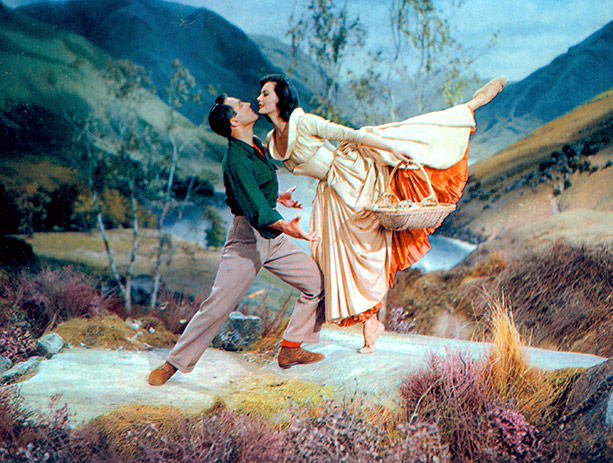 The pity of MGM’s version of Brigadoon is that it was made in 1954, at a time when the public interest in musicals had passed its peak.  This fall from favor caused the studio to economize, disastrously so in the case of Brigadoon.  Gene Kelly and Vincente Minnelli had long wanted to make the film version, but legal rights were difficult to finalize.  Their origianl conception called for the picture to be shot on location in Scotland, and to this end they scouted possible settings.  After some time in Scotland it became apparent that the project would be defeated by weather, since it could not be relied upon at any time of the year.  They settled for shooting their exteriors in the California mountains but that plan was quashed by the MGM front office, who insisted that the picture would have to be made entirely within the studio.  It was also decided that Brigadoon would be photographed not in Technicolor but in Ansco Color and in CinemaScope.  Few Hollywood directors have ever favored CinemaScope and in viewing this picture it is apparent that Minnelli was uncomfortable in his first encounter with the long rectangular frame.  It would have been difficult to fill the frame with dancers and singers on location, but even harder in the confines of a studio.

“Brigadoon, the first of Lerner and Loewe’s splendid musicals, dealt with fantasy, and for that reason had been a problem whenever it appeared in theatres.  It first appeared on Broadway in the spring of 1947, to immediate acclaim, but it was thought from the very outset that it was a musical best suited for the film medium, with natural locations.  …Brigadoon was greeted as a disappointment by most critics and its impact at the box-office was not great.  This feeling of disappointment is common with many film treatments of stage musicals, few of which are constructed in a manner which allows for literal filming.  The mood created between live performers and audience in a theatre cannot be duplicated on the screen, and the material almost always needs adaptation, which often drains away some of the original charm and vitality.  However, there is much to admire in the filmed Brigadoon; the musical arrangements and direction are faultless, as are the costumes of Irene Sharaff and the incredible accomplishment of art director Preston Ames.  The performances are pleasing if not outstanding, and Kelly’s choreography is sparkling int he Scottish group dances.  His dances with the remarkable Cyd Charisse accent the theme of idyllic love in relatively simple balletic style and give the film its best moments.”

The Films of Gene Kelly by Tony Thomas, 1974