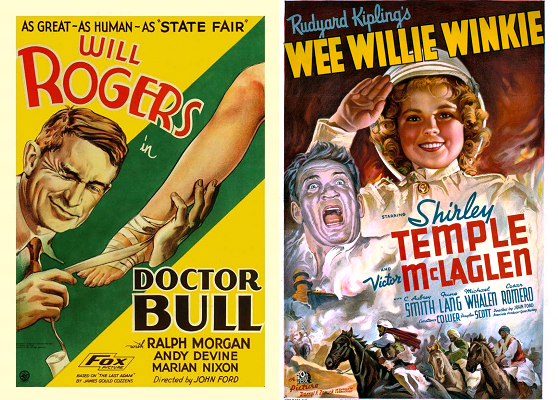 Today’s double bill gives us an opportunity to view the most popular actor and actress of the 1930’s as directed by the greatest director of the era.  Will Rogers (1879-1935), long a giant in vaudeville and Broadway, stumbled through the silent film era (much as did W.C. Fields, a close contemporary, also born in 1879) before finding his leisurely stride in talkies.  By 1933 Rogers was the world’s highest paid film star, the most popular actor in 1933-35, as voted in the Quigley exhibitors’ poll, and generally credited with prolonging Fox’s fortunes.  His death in a plane crash in 1935 had a public impact comparable to the sudden deaths of John Kennedy and Elvis Presley.  Shirley Temple (born 1928) first appeared in an innovative series of Baby Burlesk shorts in 1932-33, some bits in features in 1933, and then graduated to supporting roles by 1934, at the age of six!  By the next year she was the top box office draw in the world, according to the aforementioned Quigley poll, and remained so till 1938.  John Ford (1895-1973) was a solid, fast-working but generally second-rank director ast he decade opened–Lubitsch, Chaplin, Sternberg, Vidor, Murnau and Borzage were the gods of cinema then (Griffith and Stroheim were already passé)–but by the close of the 1930’s, with Stagecoach, Young Mr. Lincoln and Drums Along the Mohawk all released in 1939, and the landmark The Informer right in the middle of the decade, there was no question that John Ford was the Hollywood director, bar none.  While Ford’s greatest masterpieces (The Grapes of Wrath, How Green Was My Valley, My Darling Clementine, Fort Apache, Wagonmaster, The Quiet Man, The Sun Shines Bright, The Serachers, The Man Who Shot Liberty Valance to name just the most obvious) were yet to come, it is apparent that Will Rogers’ and Shirley Temple’s best films were with John Ford. 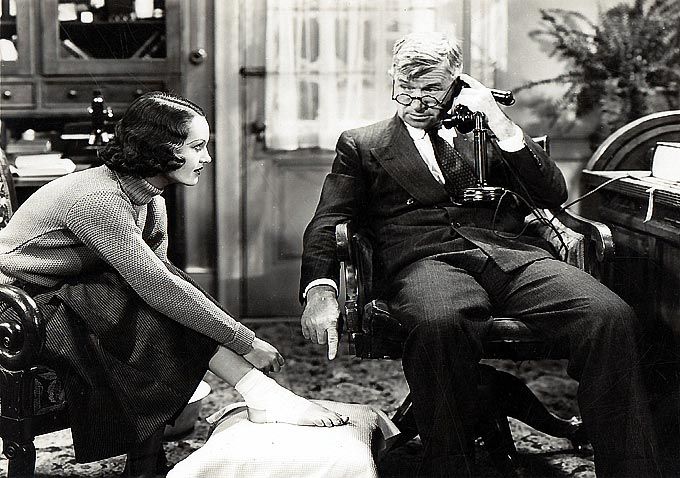 Dr. Bull was the first of Rogers’ trilogy with Ford.  In all three (Judge Priest [1934] and Steamboat Round the Bend [1935] being the other two), Rogers played a small town citizen ‘just doing right’.  In the first two films, Rogers is an important member of the community (a doctor and a judge); by the last he is a semi-reputable character hawking cure-all medicine.  All are simply outgrowths of his own character, a small-town Oklahoma boy.  When Peter Bogdanovich asked Ford if he improvised a lot with Rogers on Dr. Bull, Ford replied: “Well, no writer could write for Will Rogers, so I’d say to him, ‘This is the script but this is not you–the words will be false coming from you.  Just learn the sense of it, and say it in your own words’.  Some of the lines he’d speak from the script, but most of the time he’d make up his own; he’d stop and let people pick up their cues and then go on; he wouldn’t write the lines down, but he’d work it out beforehand and then just get in front of the camera and get the sense of the scene in his own inimitable way.  Dr. Bull was a downbeat story, but Bill managed to get a lot of humour into it–and it became a hell of a good picture.  It was one of Bill’s favourites.  We did three pictures together and it always a lot of fun working for Bill.”  In a later interview, Ford commented that Rogers never read the script or prepared himself, but would come on the set and ask Ford, “What’s this next scene all about?”  Ford expanded: “We talked it over, and he’d ask, ‘Do I have any lines?’ and I’d say, ‘I’m afraid so.’  And he’d say, ‘Well, let me look at something.  This is hogwash!  It’s from an Oxford graduate.  Go on, write it your own way!’  And what he came up with was so much better than what was written in the script.  But I don’t think he ever read a script at home.  I had only one request of him.  Once I said, ‘Look, I’m a late sleeper.  I have to get up and stand in the shower bath for ten minutes, a cold shower.  Then I have a cup of coffee, and dash down here, and I’m always a little late.  But I’m down here at eight-thirty.’  Will said, ‘I’m an early riser.  You know my cowboy training.’  So I told him, ‘Well, will you hang out in your dressing room until I get on the set?  You’re making a bum out of me!’  But he didn’t.  He wanted to visit with the grips and the cameraman and the rest of the cast, and whiz around and chat and talk, making jokes.  I’d sneak on the set and he’d spot me, ‘Ah, there he is!  The late sleeper!'”

All three Rogers/Ford films rely heavily on courtroom proceedings–as do so many other Ford films, with Fordean hero caught between the forces of individualism and social commitment.  Dr. Bull is not quite as leisurely paced as Judge Priest and Steamboat Round the Bend, with Rogers being a bit more formal and less meandering.  For those Ford enthusiasts admiring the symmetrical opening and closing shots of The Searchers (1956), we cite the parallel opening and closing sequences with the train depositing mail in Dr. Bull.  Needless to comment that the film is brilliantly photographed, as were virtually all Ford films; the cameraman this time is George Schneiderman, Ford’s first great camera director, and the photographer of Just Pals, The Iron Horse, Three Bad Men, Four Sons, Hangman’s House and Pilgrimage, among many others of Ford’s finest early work.

The working title for Dr. Bull was Life’s Worth Living, and that title was approved at a meeting of sales and studio executives.  But Will Rogers sent them a telegram, and had the title changed.

“I HEAR YOU ARE HAVING A CONVENTION BACK THERE.  I THOUGHT CONVENTIONS PASSED OUT WITH THE REPUBLICANS.  THERE IS NOTHING AS USELESS OUTSIDE OF A ROGERS CLOSE-UP, AS A CONVENTION.  BUT AS YOU ARE GATHERED TO DO SOME GOOD, ANYHOW, PUT THE NAME ‘DR. BULL’ ON OUR NEXT PICTURE.  SOME HALFWIT SUGGESTED ‘LIFE’S WORTH LIVING.’  NOW WE FIND THAT THEY HAVE TRIED TO HANG THAT TITLE ON EVERY FOX PICTURE SINCE ‘OVER THE HILL,’ SO THEY FINALLY SAID: GIVE IT TO ROGERS.  SOMEBODY MUST BE WINNING A BET IF HE GETS THAT TITLE ON SOME PICTURE, WHETHER IT FITS OR NOT, SO YOU HYENAS HAVE A CHANCE TO HELP PASS IT ALONG TO SOME OTHER POOR DEVIL TO USE.  ‘LIFE’S WORTH LIVING’ SOUNDS LIKE A GRADUATION ESSAY.  AS A MATTER OF FACT, IF YOU DON’T MAKE SOME BETTER PICTURES, LIFE WON’T BE WORTH LIVING AND IT WILL COME TO THE POINT WHERE THE EXHIBITOR IS AS BAD OFF AS HE SAYS HE IS.  I REALLY WANT TO CALL IT ‘OL’ DR. BULL,’ BUT THEY SAY YOU CAN’T USE THE WORLD ‘OLD’ IN A TITLE, THAT PEOPLE MIGHT THINK YOU WERE OLD AND THAT OTHERWISE THEY WON’T FIND IT OUT.  THEY GOT SOME GREAT ANSWERS.  WHAT HAPPENED TO ‘OLD KENTUCKY,’ ‘OLD HOMESTEAD,’ ‘OLD MAN RIVER,’ ‘AULD LANG SYNE’?  ‘OLD’ DIDN’T DO THEM MUCH HARM.”

Rumour has it that Darryl Zanuck, the omnipotent head of 20th Century Fox, was so angered by John Ford’s lack of respect for authority (read Zanuck) that he delegated Wee Willie Winkie to Ford knowing that Ford hated cute child performers and would refuse the job.  Ford later recalled: “One day Darryl said, ‘I’m going to give you something to scream about.  I’m going to put you together with Shirley Temple.’  He thought that combination would make me and everybody howl.  I said, ‘Great,’ and we just went out and made the picture.  It made a lot of money.” 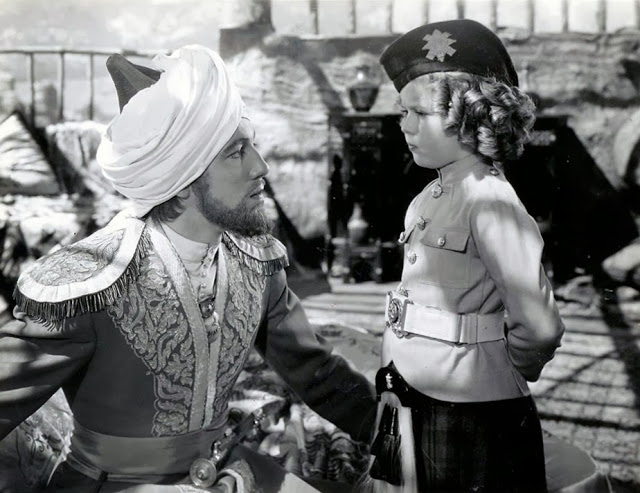 Wee Willie Winkie is another of Ford’s underappreciated 1930’s features, as is Dr. Bull, films that were important in developing his style while at the same time bringing big  box-office returns.  If The Informer was Ford’s key contemporary critical success (winning more praise than any American film before it) of the pre-Stagecoach period, and Pilgrimage the key current critical success of that same era, Dr. Bull and Wee Willie Winkie were among the popular achievements that enable Ford to continue building his pre-eminent reputation with more personal films.

Wee Willie Winkie is one of the finest example’s of Ford’s unique style when the film is compared with George Stevens’ Gunga Din, made two years later.  Both films were based on Kiplin sources and involve roughly similar conflicts, but whereas the Stevens film emphasizes action, pace and comedy, Ford’s film accents character development; only Gunga Din is a full-bodied character in the Stevens work, while Priscilla and Col. Williams and Sgt. MacDuff all come to life much more vividly in Ford’s movie.  Individual sequences were the highlights of any Ford film–these set pieces, with their little bits of business, were what distinguished Ford’s films from all others.  In Wee Willie Winkie, note the magical dance sequence, when June Lang and Michael Whalen listen to the music and dance outside the hall, and also the hauntingly brief, superbly edited funeral sequence of McLaglen.  Both of these scenes are greatly augmented by the brilliant use of shadows and light by Ford’s great cameraman, Arthur Miller.

Particularly in light of our second film, a fascinating tribute to John Ford by Satyajit Ray: “In my youth I admired John Ford for almost exactly the same reasons that I admire Beethoven: for his strength and simplicity; for his warmth, his lyricism and his breadth of vision; for his heroic stance, and his unbounded faith and optimism.”