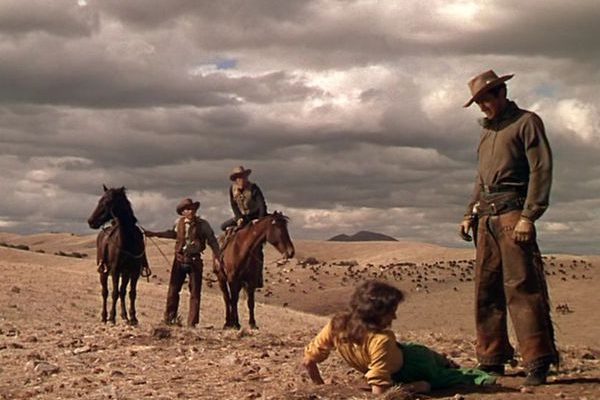 It must be a rare TFS season that passes without showing one or other of the films of David O. Selznick.  Whether operating within the studio system or as an independent producer, Selznick was one of the dominating Hollywood figures of the thirties and forties.  Though responsible for such films as A Bill of Divorcement, Topaze, Dinner at Eight, Viva Villa!, David Copperfield, Anna Karenina (Garbo), The Prisoner of Zenda (Colman), Nothing Sacred, Intermezzo, Rebecca, Since You Went Away, etc. he was also responsible in whole or in part for the careers of such stars as Jean Arthur, Fred Astaire, Freddie Bartholomew, Ingrid Bergman, Joseph Cotton, Nelson Eddy, Joan Fontaine, Katherine Hepburn, Jennifer Jones, Louis Jourdan, Vivien Leigh, Myrna Loy, Fredric March, Joel McCrea, Dorothy McGuire, David Niven, Jack Oakie, Laurence Olivier, Gregory Peck, etc.  In addition, he also brought to Hollywood directors Alfred Hitchcock from England and George Cukor and John Cromwell from Broadway.  All in all, a fairly impressive list.  The film he was most closely associated with and is most remembered for is of course Gone With the Wind.  It also overshadowed the rest of his career as he tried continuously to make a film that would duplicate its scope and repeat his success.  The two major attempts to achieve this were his remake of A Farewell to Arms with Rock Hudson and Jennifer Jones and this afternoon’s film Duel in the Sun.  Both of the films were major disappointments but Duel in the Sun was at least a very considerable box-office success partly because of the appeal of its stars especially Gregory Peck then at the peak of his early career in his first portrayal of a ‘bad’ character. 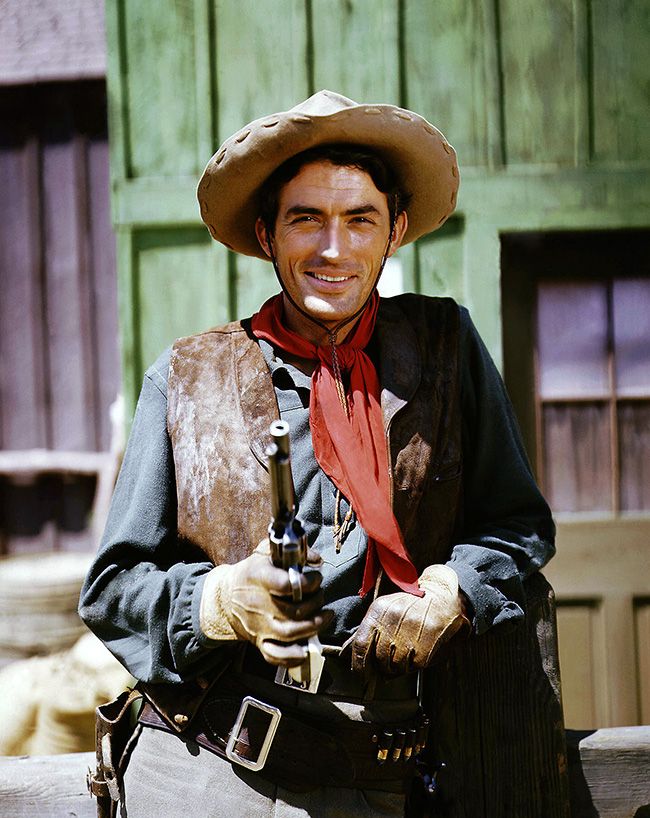 Like his only serious rival as an independent producer, Samuel Goldwyn, Selznick was a perfectionist who identified himself with quality and sought the best talent available.  But instead of leaving them free to do their thing he supervised his films in minute details.  Therefore his films during production seemed like revolving doors as one talented individual replaced or supplemented the work of another.

Perhaps we can get a better idea of his method of operation from the following memo to King Vidor’s lawyer in which Selznick was trying to work out the directorial credit for the picture:

I have been working in large part with the man who directed the film in all these later stages, William Dieterle; and I am still working with Mr. Dieterle on the preparation and shooting of additional film for this production….It was on the love scenes especially that, as Mr. Vidor will tell you, I was on the set morning, noon, and night, redirecting the actors, the camera, and even the lighting.  This, too, is not a matter of opinion, the actors and many dozens of technicians will testify…Please note that throughout these discussions I have not in any way attempted to take any directorial credit…I repeatedly asked King whether I was on the set too much and he repeatedly stated I was not…I finance my pictures myself, and make them myself, and I have been on the set constantly with only the finest directors in the business, and you are certainly not familiar with my operations if you think that any body working for me could for one moment keep me away from my pictures in any of their stages.  Furthermore, Mr. Vidor was thoroughly aware that…there were strict orders on the set that not a single scene was to be photographed, and not eve a single angle of a single scene, until I was telephoned by the assistant director, who advised me that they would be ready in a few minutes for the next setup.  I would then not merely check the exact direction of the scene, and ninety-nine times out of one hundred change it, but I would stay until I personally approved a take.  Mr. Vidor made no complaints about this….I just received a tally of the present footage of the picture, broken down by directors.  I am instructing my Publicity Department to issue a statement stating that Mr. Vidor is insisting on sole credit for the direction of the picture, of which he directed 6280′, of which he did not direct 7739′, at present writing.  These figures will be further altered, against Mr. Vidor, with the retakes and additional scenes we are planning for this week and probably beyond.  The story will state that Mr. Dieterle disputes this credit, and is receiving support from me; that I regard it as no more than just that Mr. Dieterle and the late Otto Brower should receive first-unit credit, with second-unit credit going to Reeves Eason; and that I have referred to the Screen Director’s Guild for decision of the question as to how these four men should be credited…There are several important scenes that were directed by a man who has not even been mentioned in these communications, Mr. Von Sternberg, who, I shall propose to the Guild, will receive some kind of credit, if he will accept it…

The Screen Director’s Guild gave Vidor sole directorial credit.  Otto Brower and B. Reaves Eason got credit as second-unit directors, but William Dieterle, Joseph Von Sternberg, Chester Franklin and William Cameron Menzies got no official credit.  They were however paid.  They also got to work on later Selznick films e.g. Dieterle directed Portrait of Jennie shown earlier this season. 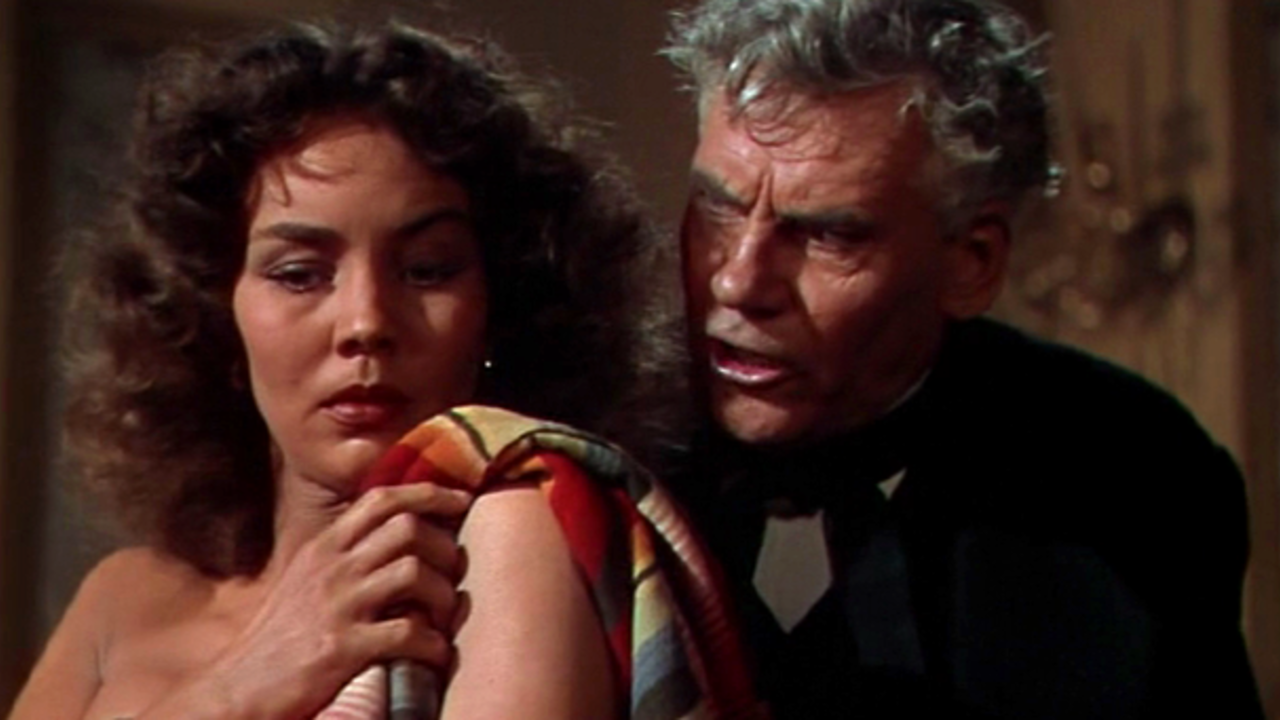 The kind of care and attention that Selznick devoted to his pictures is well exemplified in the following excerpts from his memos:

The new take of Greg [Peck] making the flying mount is even better than the old one, and I am glad we did it over.  I do wish we did not have his hat as far down on his head; and I wish you would tell both King and Greg that the hat has a tendency to make the material look like a double…and also I think he is so attractive without his hat that I think we should play more scenes without it…Otto [Brower] almost has a magnificent shot of the horsemen stretched right across the screen, going from left to right on the road, with the rolling hills in the background; but I think it is potentially so good that I think he ought to redo it the next time he has a lot of horsemen, because I think he can get better photography, and also I think the shot will be much more impressive if he has enough horsemen so that we will see them enter, and be able to hold the shot long enough for the horsemen to completely cover the width of the screen from left to right…And as to both units, I wish they would gamble more on their light at dawn, at sunset, and before and after dawn and sunset, for I am sure we will get our most stunning effects at times which would normally be considered too dark to shoot….I have the feeling that we are overdoing somewhat the use of huge close-ups.  These are enormously effective for dramatic punctuation, but only if saved for this purpose…I am aware that I have in the past stated that I thought some of our angles were  much too distant; and this feeling still holds true.  If there is any inconsistency in your mind between this and my attitude about the close-ups, please discuss it with me and I will explain further.

That kind of attention to detail and the final cost of the picture (exclusive of prints and advertising) was $5,255,000.00, an enormous sum for that time.  The factors Selznick counted on for its success, particularly the appeal of his stars was well-judged.  Both Jennifer Jones and Gregory Peck were being played against type.  Jennifer Jones had achieved stardom and won her Academy Award playing St. Bernadette in The Song of Bernadette.  Here she had to play a sultry half-breed.  (The Breen referred to in the following memo was responsible for Hollywood’s self-censorship: the Twentieth film Miss Jones was to report for was Cluny Brown, also shown earlier this season):

I have never seen Miss Jones so exhausted as she was today after five hours of dancing–not even after the terrible beating she took in Arizona…Also I think somebody had better warn Twentieth….It should be explained that she has been on this picture for almost a year off and on, during which she has played in every scene; has taken the most terrific physical beating ever administered to an actress because of the nature of the story, the work climbing the mountains, etcetera; that she had to get up at six o’clock in the morning to apply Indian make-up which also took her a couple of hours at night to get off, so in effect for the better part of a year she has had fifteen-hour days, and then has climaxed all of this by having to learn two new dance routines from scratch–one becuas we couldn’t shoot it early in order to finish with Peck, and the other because we had to throw away a dance as a result of Breen, after she had spent months of arduous effort learning it.  Also, that all of this was preceded immediately by work on anther picture, Love Letters, and that she filled in her time by working as a Nurse’s Aid…

It was indeed a strenuous production though our members can decide for themselves if Miss Jones was sultry competition for Jane Russell in The Outlaw which was the scandalous western of that period. 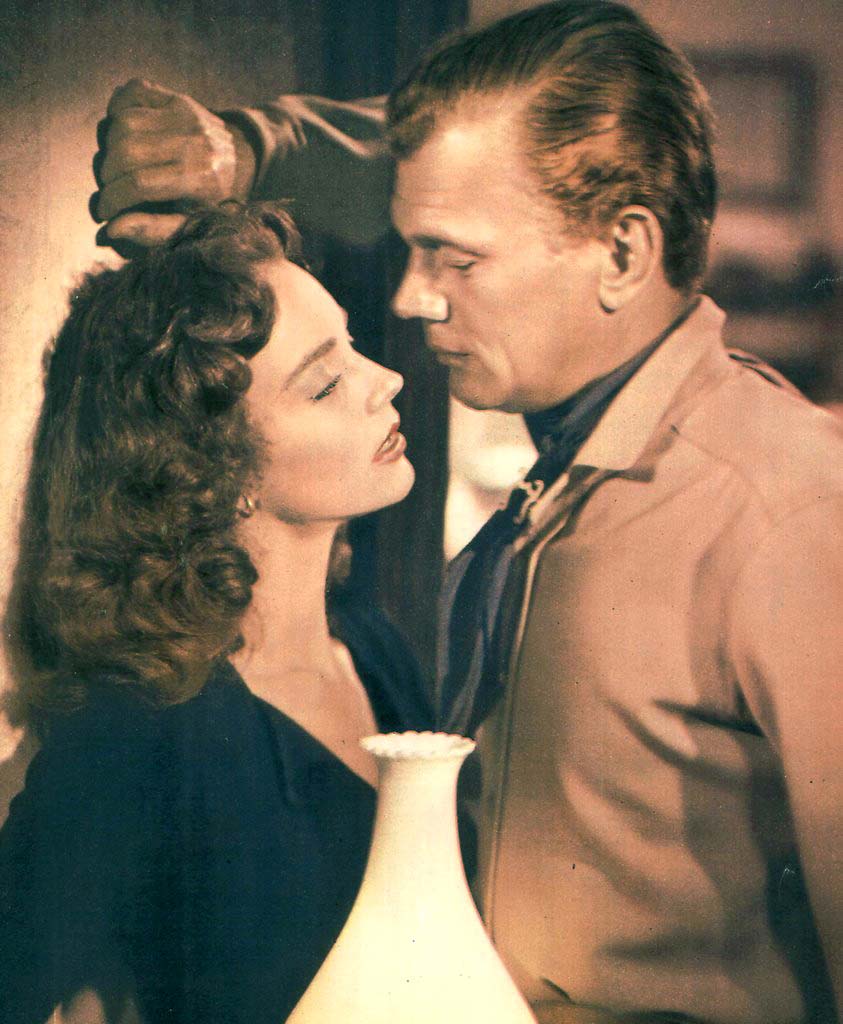 Though Dimitri Tiomkin wrote many better remembered film scores the full lush music fits the ripe, overblown, (do I offend any music lovers by calling it) the operatic quality of the film.  It is full of large set scenes and many notable set pieces as for example the scene in which Walter Huston as the Sinkiller exorcises the devil from poor Pearl Chavez.

The ending of the film lives in the legendary lore of Hollywood extravagance.  To adolescents of that period it suggested what the name of Paris evoked for their grandparents.  On the adolescent underground the film was known whether in anticipation or recollection as Lust in the Dust.  For more adult viewers the film was rather less daring than it seemed–but O tempora!  O mores!  How times have changed!