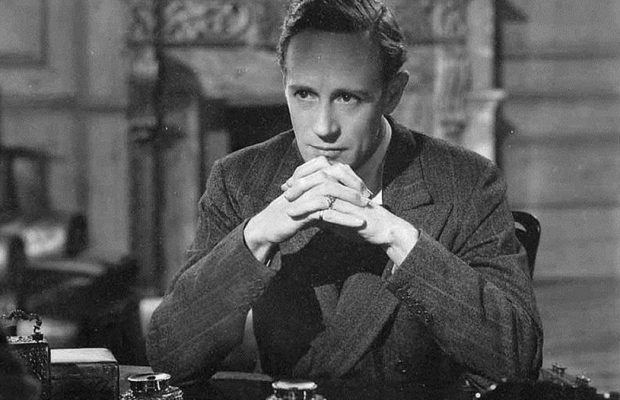 Toronto Film Society presented The First of the Few (1942) on Monday, May 12, 1980 in a double bill with Sorry Wrong Number as part of the Season 32 Monday Evening Film Buff Series, Programme 10.

The title of our film derives from Churchill’s immortal tribute to the Royal Air Force following the Battle of Britain in 1940: “Never have so many owed so much t so few.”  The “few”, of course, were the out-numbered but skilled and courageous fighter pilots who beat off Hitler’s vaunted Luftwaffe.  The “first of the few” was R.J. Mitchell, the designer of the magnificent Spitfire, whose superiority over the German fighters helped save the day for Britain.

In 1941 actor Leslie Howard, following the success of his film Pimpernel Smith (shown last year at TFS), decided to tell the story of Mitchell and the creation of the aircraft which helped to save his country in its darkest hour.

Since his return to England in 1939 after starring in Gone With the Wind, Howard had been active in the war effort, serving on an “ideas committee” at the Ministry of Information, making weekly radio broadcasts to the U.S., and appearing in the films 49th Parallel and From the Four Corners, a short documentary.  With Pimpernel Smith, he had fulfilled a long-standing ambition to direct (he also produced, and worked closely with the scriptwriters).

Although, as an actor, Leslie Howard was one of the best, he claimed that he seldom enjoyed his craft, and, in any event, he realized by 1938 (he was then 45) that his matinee idol days were drawing to a close.  Among Howard’s best known films were Berkely Square, Of Human Bondage, The Petrified Forest, and Romeo and Juliet.  He had shared directorial responsibilities with Anthony Asquith for Pygmallion, and in 1939 co-produced David Selznick’s Intermezzo.

His success with Pygmallion as co-director proved to Howard that his future lay more in directing than acting.  In this area, he found perhaps the truest fulfilment of his creative impulses.

The First of the Few, like Pimpernel Smith, contains its share of propaganda (the use of inspiring passages for Churchill’s speeches, the montage sequence of the building of the Spitfire to Walton’s heroic score, the framing sequences of the Battle of Britain).

But Howard is not so much concerned with the few, as with the story of R.J. Mitchell, told in flashback to the RAF pilots now flying his plane.  It is a deeply felt, loving portrait of a man with whom Howard seems to have felt an instinctive rapport–the solitary visionary battling against government indifference, commercial pressure, and illness, to produce the plane that will be Britain’s salvation.

The mood is set when the film dissolves from the tumult of the Battle of Britain, to the quintessentially peaceful scene of Mitchell lying on his back atop a cliff, looking through his binoculars at the seabirds wheeling gracefully in the sky and determining to design a plane that will fly like them.  It establishes him at once as the dedicated dreamer whose life is planes and plan building.  He seeks to win the Schneider Trophy for Britain and, when he does, regards his work as complete.  But, all this is changed by a trip to Germany.  When Mitchell learns the nature of German re-armament plans, and world domination ambitions, he returns to England determined to build “the fastest and deadliest fighter plane in the world” so that his country can defend itself.  Although warned by a doctor of the consequences if he does not rest, he works on, and finally learns that the government has accepted his plane–the Spitfire.

It is hard to make a successful film about a lone pioneer devoted to research and animated by pure love of his subject–but Howard succeeds brilliantly for several reasons.  First, the actor is perfect as R.J. Mitchell, the sort of part he had been born to play–the show, absent-minded, pipe-smoking visionary–Leslie Howard himself.  He captivates with the sincerity of the pioneer as he explains with bubbling enthusiasm the plans for his new plane.

Second, there is a full measure of humour, much of it handled in his inimitable style by David Niven (given leave from the British Army to play his role of Geoffrey Crisp, Mitchell’s test pilot).  Niven’s cheerful insouciance is put to excellent use, particularly in a scene where he brings a chattering, vapid “date” to dinner at the Mitchell’s and is enormously embarrassed by her behaviour, and later when he drunkenly sends up the Germans at a party (“Adolf who?”).  The enemy, of course, come in for plenty of satire.  The Italians are personified by the bombastic Mayor at the Schneider Trophy races constantly declaring “Silencio! A telegram for Il Duce” and proceeding to read out an equally bombastic message from Mussolini.  The Germans are more subtly portrayed–loud, humourless, arrogant, fanatical, but infinitely dangerous.  The essential difference between their nature and that of Mitchell is beautifully encapsulated in a scene where Mitchell and some German aviators watch gliders.  “Efficiency,” say the German.  “Poetry,” says Mitchell.  “Ach, you English, you sentimentalise everything,” is the reply.

Finally, there is Howard’s special talent as a director.  As one would expect, he handled actors very well, but he also revealed an instinctive grasp of mood and nuance, imbuing his films with a quality of controlled gentleness and evoking the maximum emotional response from the audience by a characteristically English and wholly effective technique of underplaying.  His mastery of mood, for instance, can be seen in the chilling scene in Germany at a party which is initially played for comedy with the drunken David Niven insulting the Hun, but in which the mood gradually darkens as from their urbane insinuations and fanatical rantings Mitchell realizes that the Germans are planning to re-arm (“Guns always have the word”.  This technique of underplaying is also evident in Mitchell’s scenes with his wife (Rosamund John).

There is the scene where he tells her of his illness, she reads out a letter from their son at school, and he agrees to take a holiday but then catches sight of the newspaper headline “German Bombers Destroy Spanish Town”.  No more needs to be said.  We know and he knows that he must go on with his work, regardless of the cost.

The First of the Few proved to be Leslie Howard’s last film appearance.  He subsequently directed and co-produced The Gentle Sex and co-produced The Lamp Still Burns.  In the meantime he made plans to film Hamlet, based on his 1936 New York stage production, and to be directed by and to star himself.  He intended, after the war, to give up acting entirely, to produce and direct both plays and films.  However, it was not to be, for on June 1, 1943, Leslie Howard was killed when the airliner on which he was returning to London from a lecture tour in Portugal was shot down by German fighters over the Bay of Biscay.

Some measure of Leslie Howard the man may be obtained from part of his radio broadcast to the United States, after the fall of France: “Most of you, I’m sure, will know what I mean when I speak of the curious elation which comes from sharing in a high and mysterious destiny.  The destiny of Britain we cannot know for certain, but we can guess at it and pray for it, and work towards it as we find ourselves singled out of all the nations in the world for the rare honour of fighting alone against the huge and ruthless forces of tyranny.”

Of Leslie Howard the actor, director Adrian Brunel left this record of working with him: “Leslie had a first-class brain and, in spite of his inclination to roam, he had great concentrative ability.  Before he began to direct a scene, we would usually discuss its shape; he would outline his plan, using me as a sounding board and getting my technical reactions.  Then he would either go from his dressing room where our discussions often took place or he would break away from our huddle in a corner of the studio, and take charge on the floor.  Finally he would go over his own lines if it was a scene in which he appeared and, by a tremendous power of concentration would speak the lines without fault.  When he came to photograph a scene, the line came from him with such apparent naturalness and effortlessness, with such clarity, sincerity, and mastery of meaning that it was a revelation.  He was a really great artist.”  Howard liked a relaxed working atmosphere, rarely did much before 10:30 a.m., improvised freely within the bounds of narrative development, and brought to his films that creative enthusiasm which made them so much his own.

Leslie Howard died at the peak of his career, at a time when his star was never higher.  Nevertheless, by the time of his death on that sunny, sad day in June 1943, Howard knew that the war was being won and that the fate of Nazi Germany was sealed.  The German Army had just been decisively defeated in North Africa, and was on the run in Russia; the U-boat menace had been conquered; and the RAF’s Stirlings and Lancasters were smashing deep into the heart of the Reich.

As R.J. Mitchell, Leslie Howard had pronounced his own epitaph: “We’ve all got to pack it in some time.  It doesn’t matter when.  it’s what we do before that is important.”  What Leslie Howard had done for a few short years was to capture and enshrine the spirit of a nation at war to reveal with humour and understanding the nature of the English people and in his own way therefore contribute to the ultimate victory of the Allied cause.  This film is his masterpiece and memorial.