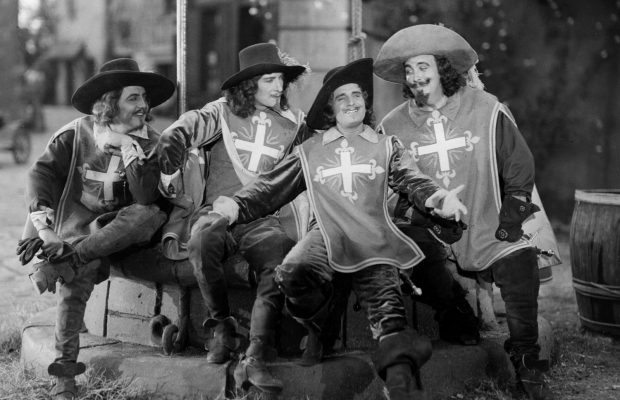 NOTE TO MEMBERS: Due to unavoidable booking re-arrangements, tonight’s feature, The Iron Mask, is a replacement for The Gaucho, which we had intended to show this season, and may next.  Will Rogers’ short comedy, Uncensored Movies, originally programmed with The Gaucho, is not available for tonight’s show, but may be included in our last show in April–if members can stand a marathon comedy programme of Rogers, Are Parents People? and The Marriage Circle!

This evening’s programme will open with Serial Cavalcade, a compilation of hectic highlights and climactic moments from serial films of 1919 to 1929 (edited by William K. Everson from material compiled by John E. Allen).  These continued-next-week “cliffhangers” were at the peak of their form and popularity in this period, often showed real care and polish in their production values, and were a training ground for many feature stars and directors.

The following note is from Douglas Fairbanks, the Fourth Musketeer by Ralph Hancock and Letitia Fairbanks (Doug’s niece): “In 1928, with the whole picture industry up in the air on the issue (of sound), production at many studios slowed down until the ballots of public opinion could be counted.  Companies were idle waiting until the bosses decided to go talkie or stay silent.  Douglas Fairbanks continued to produce his own pictures in his own way.  His next picture revealed his uncertain feeling about sound, and the desire to play once more the role of his beloved d’Artagnan.  The Iron Mask (released early in 1929) was based on Dumas’ The Man in the Iron Mask and Doug, who could not visualize this role in anything but pantomime, shot it silent.  It was the last bold gesture of the fourth musketeer–his portrayal was more like the star’s own life than the public ever realized.  It was one of the few times on the screen that he played the part of an older man, which he was.  It was the only film in which he met death and it marked the end of the screen character the public had loved.  We believe The Iron Mask was his own way of saying farewell to those millions who had shared his adventures and thrilling escapades in a decade of movie-going.  Several members of the original cast of The Three Musketeers repeated their roles in The Iron Mask–Margeurite de la Motte as Constance, Leon Barry as Athos; but Eugene Pallette, who had appeared as Aramis before, had put on so much weight in the intervening years that he more amply filled the role of the corpulent Porthos, and Gino Corrado was therefore cast as Aramis.  Doug imported Maurice Leloir from France to do the costumes (he was an authority on the period, an illustrator of Dumas’ books, and his price for coming to Hollywood was $40,000) and Laurence Irving, nephew of Sir Henry, came from England to design the sets.  Allan Dwan directed, and he recalls that ‘Doug seemed to be under some sort of compulsion to make this one of his best productions.  He had always meticulously supervised every detail of his pictures, but in this one I think he eclipsed himself.  It was as if he knew this was his swansong’.  As far as his career in pictures was concerned, it was”.  (Fairbanks subsequently made five talkies, with varying results, but none equalled his silent successes).  The Iron Mask, incidentally, although ‘shot silent’, was released with a musical soundtrack that included vocal renditions of “One for All and All for One”, a song from the Rodgers and Hart stage musical version of The Three Musketeers.

Paul Rotha in The Film Till Now says: “Fairbanks, one feels, realizes only too well that he is neither an artist nor an actor in the accepted understanding of the terms.  He is, on the contrary (and of this he is fully aware) a pure product of the medium of the cinema in which he seeks self-expression.  But knowing his own limits and those of Hollywood, he will surround himself with persons who make claim to artistry.  He will bring from France Maurice Leloir, a specialist in historical costume, to supervise in Hollywood the designs for The Iron Mask.  He knew well, in this case, that no American designer had either the knowledge or taste to reconstruct with any faith the costumes of seventeenth-century France”.

Lastly, the Museum of Modern Art Film Notes‘ estimate of the star: “Fairbanks was of a piece from his first to his last American film.  Like most other great entertainers, he did one thing superbly and all the time.  It consisted in a range of gestures of the whole body, exquisitely co-ordinated (he is the only film star to relegate the professional athletic stand-in to the status of a competing amateur).  The sight of this in motion, whatever the plot was saying, is a kind of spiritual grace.  And it is as surely an indigenous gift of the movies as the flying feet of Fred Astaire, or Disney, or the skimming shore bird of Song of Ceylon.”