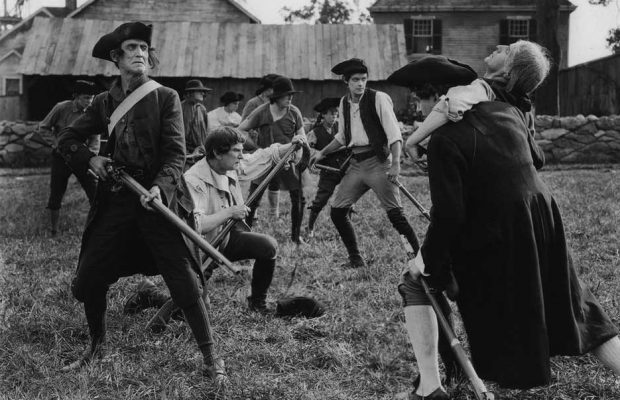 D.W. Griffith, the great creator and innovator of The Birth of a Nation and Intolerance, and the sensitive master of more intimate human drama (Broken Blossoms, Way Down East, Isn’t Life Wonderful?) was hardly at his happiest in America.  Although a number of critics, with many superlatives, hailed it as a masterpiece at the time of its release, the judgment of the years is not as laudatory.  The “personal” story and characters are among his weakest, and at times make for pretty dull going.  But as a spectacle, it is well worth the attention of film-lovers and film students.  The staging of such sequences as Paul Revere’s ride, and the various large-scale battles of the Revolutionary War, is genuinely exciting and impressive.

Herewith some extracts from notes on America by William K. Everson, an enthusiastic and knowledgeable student of Griffith, and director of the Theodore Huff Memorial Film Society, New York:

“Just as The Birth of a Nation had been of the Civil War, so was America an accurate–but highly controversial–treatment of the Revolutionary War.  The complaints this time came from historians who accused Griffith not of distortion, but of the shifting of emphasis.  Most of these historians were from aristocratic Eastern families, and they saw the war as one that was fought almost solely along the Eastern seaboard.  To Griffith however (and many military tacticians agreed with him) the real struggle was in the interior, and was waged over the all-important viewpoint).  America follows baically the same pattern as The Birth of a Nation and Orphans of the Storm.  Taking contrasting groups of “high-born” and “low-born” characters, Griffith weaves them neatly into his historical story.  The build-up is slow; political intrigue, plot and counter-plot, as the machinery of war is set in motion; then a cavalcade of furious and spectacular action until the first climax–and the end of the first half of the film–is reached.  In Part Two, the process starts all over again, but already from a much higher pitch, building to a mighty and typical Griffith climax of two battles intercut, one with the other, and an exciting “ride to the rescue”.  The best of America is Griffith’s best, but the film as a whole is rather below the standard of The Birth of a Nation.  Its chief fault is in the often unduly protracted love story.  As always, of course, the battle scenes are the highlights of the production–and what magnificently organized scenes they are.  Every extra, knowing exactly what to do, performs as an individual and not as a part of a mob; heroic tableaux and little vignettes of personal action are brilliantly interwoven into the frieze of panoramic spectacle.

“The idea that eventually resulted in America was born in May 1923, when the Daughters of the American Revolution addressed a letter to Will Hays, asking why no film on the American Revolution had been made.  Since, in Hays’ opinion, Griffith was the one man qualified to undertake such a venture, he personally suggested to Griffith that he make it.  Griffith was interested, visited Lexington, Concord and other landmarks, and decided to make the film.  The bulk of it was shot at the Griffith Studio in Mamaroneck, New York.  Huge sets were flung up there–the British Houses of Parliament and the Lexington “exteriors” among them.  The battle of Lexington was filmed in this studio.  Other scenes were filmed at the Shirley and Westover plantations in Virginia along the James River, and in old Williamsburg.  The Johnson Hall battle sequence was shot just south of Washington, other battle scenes along the Putnam County Border in New York state.  Many of the locations used by Griffith are virtually unchanged to this day, and New Englanders will recognize stretches of the Boston Post Road, and glimpses of Long Island Sound, in many scenes.  The first sequences filmed were those showing Paul Revere’s midnight ride to alert the Minute Men.  This sequence alone took some two weeks to shoot, and involved many of the locales that figured in the historic ride.  The Old North Church itself, and not a studio replica, was used in these scenes.  The ride itself is a superbly created sequence, starting with some beautiful glass shots across the river, and moving right into the beautifully lit and photographed ride.  After two or three reels of historical exposition, this is the first real action sequence and re-confirms that Griffith was still a master craftsman, despite much talk from latter-day “historians” about America representing “Griffith in decline”.  The ride was filmed with a camera mounted on an automobile that tracked along beside–or in front of–the rider.

“It would have been difficult for Griffith to film the gigantic battle scenes without the co-operation of the U.S. Army; Secretary of War John W. Weeks authorized him to use elements of the 16th Infantry, 18th Infantry and 3rd Cavalry.  One of the officers in charge, working directly under Griffith, was Major Jonathan M. Wainright (who can be seen leading the cavalry charge at Johnson Hall), who later led the heroic defense of Bataan in 1941-42, and died in 1953.  The battles were staged with the maximum of accuracy and realism.  (The battle lines at Lexington were duplicated to a man–800 British versus 77 Americans.  The drum used by the Minute Men in the film is the original drum used in that battle, and the reconstruction of the skirmish is based very largely on the famous Doolittle drawings).  After the infantrymen arrived at Somers, N.Y. they were put through a rigorous training schedule prior to the filming.  They had to become familiar with the various uniforms they were to wear (British Regulars, Continental, Scottish Highlanders, etc.) and were drilled in the complicated arms manual of the day.  Using old Revolutionary War manuals, they were shown how to load and fire the old muskets.  The scenes of Washington at Valley Forge were the last to be shot–due to an unexpected dearth of snow.  The unit had been waiting for snow far too long; when it finally came, everyone scrambled into action so the whole sequence could be finished as quickly as possible.

“Incidentally the principal ‘heavies’ of America–Walter Butler, Captain Hare, and the not unsympathetic India, Joseph Brant, are all completely accurate recreations.  Historians agree that Butler had ‘not one redeeming feature’, unless it be his magnetism and leadership.  He was so hated and despised even by his British allies that when finally killed in battle they didn’t even bother to bury him but left him for the wolves!  Perhaps Griffith places too great a stress on the importance of Butler.  In the latter half of the film Butler becomes the common enemy and the war between Britain and America is largely forgotten.  This is due in part to Griffith’s friendship for the British and desire not to offend.  (He had made Hearts of the World during the war for the British Government, and Intolerance had been presented, by request, at Buckingham Palace).  As such, he bends over backwards to stress the “British code of honor” in warfare.  (Actually both sides perpetrated some pretty cold-blooded massacres during the 1776 upheaval).  However, America was further doctored when released in Britain.  The title was changed to Love and Sacrifice, a number of eliminations were made and subtitles re-written.”