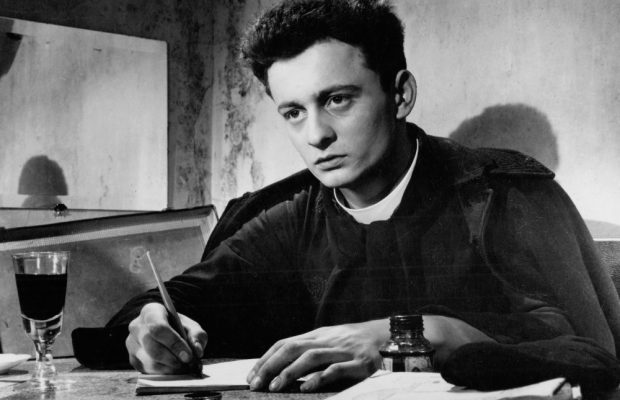 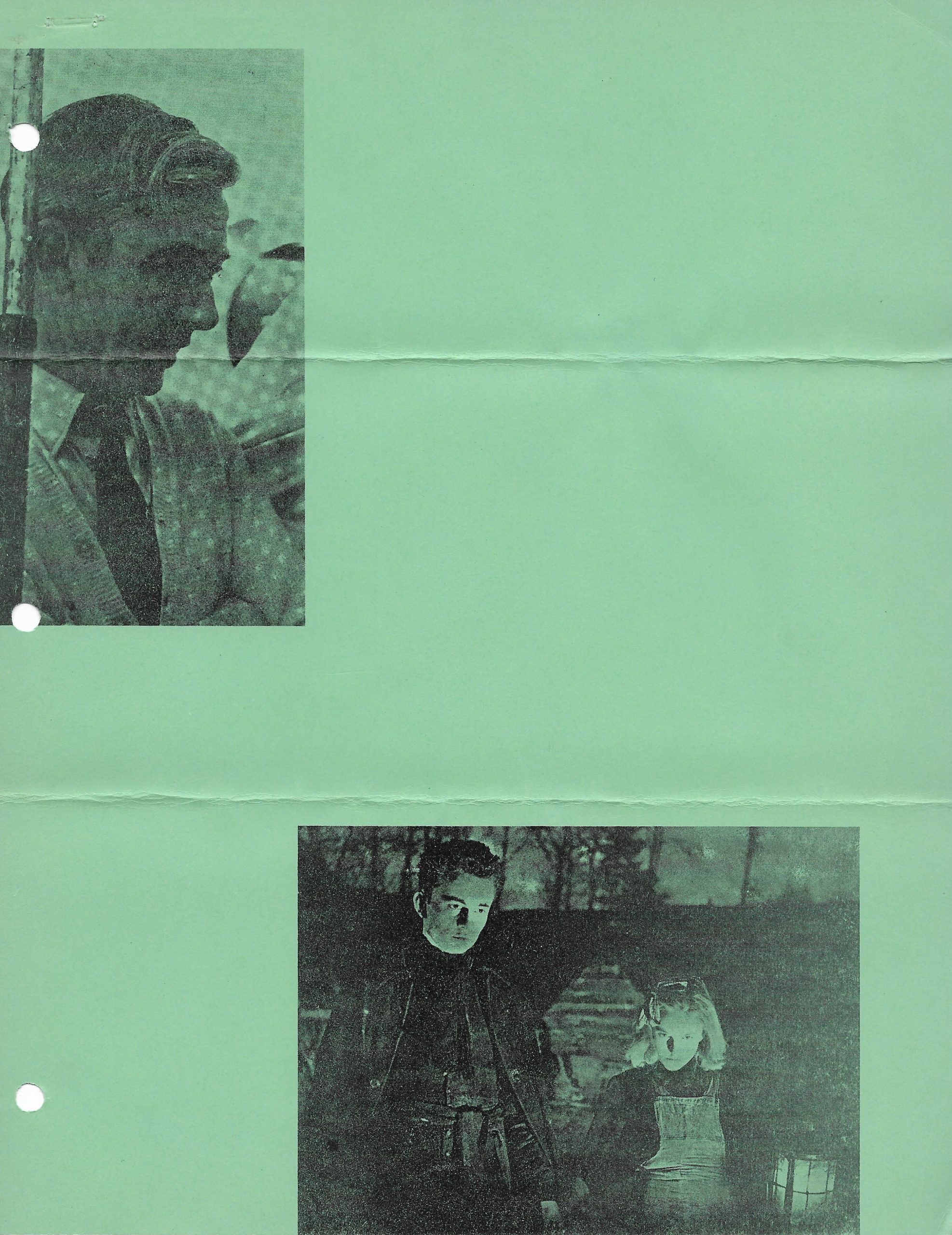 Told with quiet humour (in contrast to the hard brilliance of Rooty Toot Toot–to be shown by the Society in April), this quite recent UPA cartoon is a fresh and charming trifle, a near-nonsense tale of a little girl, taken from a story by Ludwig Bememans and set against a brilliantly drawn Paris.  The animation is particularly well executed, with the backgrounds providing atmosphere and setting when required, but eliminated when necessary to allow the action to proceed without distraction.

Cameraless animation in a trailer made by Norman McLaren in his first year with the National Film Board; 35mm two-colour process; music–from a Benny Godman recording.

A prize-winner at the International Film Festival at Venice, this is a strange essay in which the makers seek to establish a kind of mystique of mathematical purity which they find informs a simple equation, natural forms and abstract art.  “The subject is intriguing, the visual interpretations fascinating to watch, the whole a rather too complex undertaking to be made convincing in 12 minutes.”

There will be NO INTERMISSION tonight 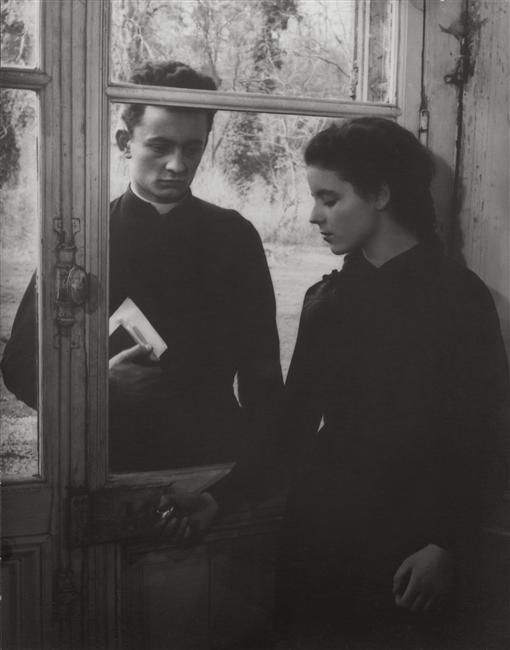 “Now and again I see a film with which an audience, I feel, should take trouble.  Diary of a Country Priest is such a film: difficult, severe, but with rewards which I will venture to call pure.  I have seen it three times.  At each fresh visit I find it more exquisite, more powerful more moving, its images stronger, its figures and shadowed faces full of intenser feeling.”

Of the outstanding talents which have emerged in France since the past decade, Robert Bresson is one of the most remarkable.  His three films explore new ground.  Les Anges du Péché (1943), Les Dames du Bois de Boulogne (1945), and Journal D’un Curé de Campagne are rare and uncompromising experiences in the cinema.

“For me the cinema is an exploration within“, stated Bresson.  “Within the mind, the camera can grasp anything.  As far as I can, I am eliminating anything which may distract from the interior drama.  The photography is simple; no effects; no sophistication.  The natural backgrounds will be very little seen, but their presence will be known, and that is enough”.

Journal D’un Curé de Campagne concentrates on the interior life of a priest who is little more than a boy.  The protagonist is a favorite with Bresson–a dedicated, haunted, isolated self-questioning hero, to whom all human communication seems to become increasingly painful, and whose eye is fixed on a horizon that others cannot see.  His creation offered a greater challenge than before, for it involved also a portrait of a kind of saint, a mystic, a person with an inner life of great richness, privacy and pain, most elusive for the camera to realise.

With the style of the film dictated by “the exploration within”, Journal  eschews all technical colour, even the shape and pattern of formal drama.  The pace looks, on the surface, inflexible; the dialogue has a lucid, precise, condensed quality; the music score is spare and angular; natural sound is used in an arbitrary, succinct manner, usually as a reminder of the world outside the world of the film.  Against the wintry landscapes and anonymous interiors, faces are caught in close-ups of rigid clarity and power, and recurrently examined as if under an X-ray machine.  The drama lies completely within the images of the faces.  This concentration on the human face, and revelation of situation through it, is Bresson’s particular gift, and he has developed it with each film.

Where Bernanos’ novel was profoundly grim, Bresson’s film has a quality of exaltation, of interior power.  Journal is not a film about religio, as someone put it, but about faith.  Though it has the physical and spiritual masochism to be found in so much modern Catholic art, it also possesses a genuine nobility.

Bresson uses only little-known players.  He selected an unknown Swiss actor, Claude Laydu, for the part of the priest, and saw him every Sunday for a year before shooting started, to instil into him his conception of the character.  The film was shot entirely on location in a small Artois village, setting of the original novel.  Journal D’un Curé de Campagne was awarded the Prix Louis Delluc for the most distinguished French film of 1950.

Robert Bresson is in his early forties.  A former painter, he made his first contact with films before the war, working for Clair.  His work has often been likened to Dreyer’s, but Bresson denied having seen La Passion de Jeanne D’Arc until a year after he made Journal D’un Curé de Campagne.  Like Dreyer, he has been able to make very few films and he insists on dominating his actors.  Neither his point of view, nor his temperament, nor his methods are likely to command large audiences.

It is possible that Les Parents Terribles will be shown later in the Season.

THE ANNOUNCEMENT OF THE TOWNE CINEMA SHOWING projected at the last Exhibition Meeting was prepared by members of the T.F.S. Production Unit.

The Unit’s first production, a three minute trailer is being edited for use on the December or January programme.  Members interested in joining the Production Unit are most welcome; for further information, please call Production Unit Manager, Miss Moira Armour, at MA 7467.

The final quotation from Roger Manvell in the Programme Notes on The Italian Straw Hat should have read:  “It is (the elderly folk) which give the film its final right to survive……….”

The Italian Straw Hat:  “Charming; remarkable that a film could be made with so few subtitles; only the French could have done it; characters looked real, not like people of a later era dressed up”—“Good visual comedy”—“Too long, but some scenes superb; deserves society showings as it is of historic interest both in the growth of film as an art and of Clair as a film craftsman of great ability; although now dated for general audiences”—“Utterly delightful! a masterpiece”—“Good; some almost perfect timing of gags”—“Good; slow-paced but bearable”—“I feel that study of this film reveals that it is not overlong or repetitious, but every little shot and movement has its place; as carefully planned as a ballet”—“Rather poor; definitely can’t compare with last year’s French comedy Jour de Fête“—“Incredibly bad; had everything but itching powder”—“Technically flawless, much ‘ahead of its time’; even today some of the technique has not been surpassed; but as entertainment out-dated; like a tapeworm, little flesh but enormous length; comic situations repeated until worked to death; some of the satire superb; cut by 50% I might have found it amusing; as it was, just boring with exception of a few sequences; never made up its mind whether to be straight slapstick comedy or sophisticated satire; music out of tune with film, made it drag even more; abominable print.”

THINGS DISLIKED:  “After the third time around I got a little tired”—“The length, the slow pace; situations rather vague sometimes”—“Dragged at many stages”—“Wore rather thin after a time; would have been more effective as a short”—“Heavy acting in spots (officer)”.

The City:  Excellent documentary; only hope that some of the ‘town planners’ of Metropolitan Toronto see it!”—“By far the finest American documentary I have yet seen; technical work fine, cutting brilliant; an air of freedom and spaciousness sets it apart from the contrived and restricted product so generally associated with Hollywood; juxtapositions of old and new both original and effective; shows the American way in contrast with the American ideal; a brilliant social document”—“Still a fine film, but ending insipid”—“Interesting documentary but worked on too shar p contrasts”—“One of the best documentaries I’ve seen; so concise and so real”—“General idea is admirable, but struck me that it was made during the depression when most people weren’t living very well anyway; scenes of slums chosen were the worst possible; slums will never be entirely removed until government takes a better view; narrator isn’t entirely correct when he says ‘it’s up to you’; the angle was wrong; it’s the men who build the factories and make the laws who decide what cities will look like, not the Joe in the streets”—“Oversimplification: Just because Squibb can afford to set up such a development doesn’t mean Olga Coal can”—“This is the seventh time I’ve seen The City and it still stands up; must be a classic!”

GENERAL COMMENTS:  “As a serious member of a film society, I object to members disturbing those watching the film by heaving themselves to the exits before the true ending is reached.  The ending to this film is one of the most delightful parts; can’t people wait until the lights go on?”—“I am joining the avalanche against he early-leaver; the film was too long but every member should have had some idea of what it would be like and if he was in doubt about sitting through it, he should have either sat at the back of the theatre or stayed home”—“Can’t you operate with less light in the house?  This is bad in many modern cinemas but far worse with the darker images of some of these older films.”

Two Cents Worth of Hope [Due Soldi di Speranza]:  Like several other Italian directors, Renato Castellani employs a realistic background of poverty and unemployment and gets remarkable performances from non-actors.  There any resemblance ends, for the films of this highly individual craftsman have a gaily ironic and comic spirit–the irrepressible spirit of people who refuse to let life beat them.  His movies move like express trains and fairly burst with life and vitality.  Two Cents Worth of Hope, a prize winner at the Cannes Film Festival last year, is one of his best.

Intelligent, adult and authentic movies on religious themes are rare.  Louis de Rochemont’s Martin Luther is one of the few.  It’s a courageous, absorbing, and sometimes stirring film.

The Captain’s Paradise:  Alec Guinness in fine comic form as a blandly bigamous skipper (not as slickly made as his Ealing comedies, but good fun); The Holly and the Ivy:  a believable, enjoyable and quite moving examination of Yuletide family reunion–intelligently written, ably directed and exceedingly well acted by Ralph Richardson, Celia Johnson and a fine cast.

Hollywood is best represented at the moment by a modest, sincere and pleasant movie called The Bright Road, involving a young negro school-teacher and a fine cast.

P.S. – Just saw a screening of Tom Stobart’s remarkable camera record of The Conquest of Everest.  It’s something!