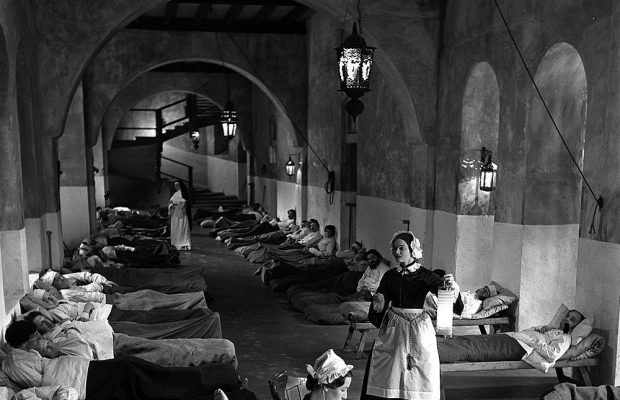 Toronto Film Society presented The Lady With The Lamp (1951) on Monday, November 12, 2012 in a double bill with Q Planes as part of the Season 65 Monday Evening Film Buffs, Programme 2. 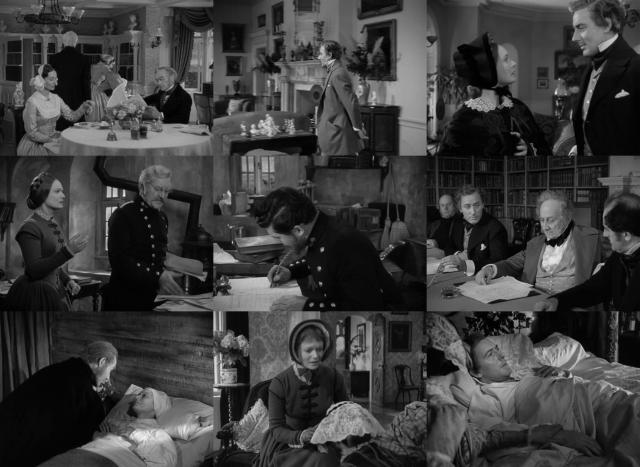 The locomotive seen in this film – the “Lion” – is one of the oldest in the world. It has appeared in several films, and actually played the starring role in The Titfield Thunderbolt (1953). During the filming of Thunderbolt its tender was damaged in a shunting accident. The damage – part of its history, after all – is still visible today. It is the second oldest locomotive to be steamed, the older being the British-built American locomotive “John Bull”. The Lion ran between Manchester and Liverpool for 20 years, beginning in 1838. It was recovered by train buffs in 1923 and restored to working order in time for the 1930 centenary of the Liverpool and Manchester Railway. For many years, it was exhibited in Manchester’s Museum of Science and Industry. It now stands proudly on exhibit in the Museum of Liverpool

ANNA NEAGLE was not appreciated by most critics of her day, who continually wrote her off as just another pretty face, and perhaps that is why she is not better remembered now. Her ladylike loveliness and charm pleased the public (for seven straight years after WWII, she was voted Britain’s favourite actress) but it alienated critics. Eighty years on, it’s time to stop listening to sour old voices and judge the movies ourselves. To overlook Neagle is foolish; she exemplifies British tastes of the 1930s and ‘40s better than any of her contemporaries. She was a top star for over 25 years and played in a wide range of movies. Only a handful of actors have ever been so successful, in any country.

No one played more female British icons on screen than Anna Neagle. Her film portrait gallery included King Charles II’s saucy mistress Nell Gwyn, Queen Victoria (in three films, overall), Crimean War heroine Florence Nightingale, heroic World War I Nurse Edith Cavell, 1930s pioneering aviatrix Amy Johnson, and brave undercover World War II operative Odette Sanson Hallowes. All were played splendidly by the hard-working actress. But she did much more than portray historical figures. Neagle was a also gifted dramatic and musical comedy performer. By 1946, when she first teamed with Michael Wilding (who was eight years her junior), Neagle had been a top star for 12 years. Their popularity together helped rejuvenate her long career, giving it a big postwar bounce. Their first film, Piccadilly Incident, was chosen as Picturegoer magazine’s Best Film of 1947. In retrospect, critic Godfrey Winn considered them “the greatest team in British films.”

Handsome, mild-mannered MICHAEL WILDING was a promising artist when he finished school in 1933. He was very pleased to find work in the art department of a London film studio, but the situation didn’t last long. Producers thought young Wilding far too handsome to go to waste behind the scenes, and invited him to become a movie actor instead. He made his debut at age 21, playing a small part in an Anna Neagle film, Bitter Sweet (1933). This was the first of many supporting roles. His breakthrough came with a major part in Noel Coward’s classic In Which We Serve (1942), after which he was cast in leading roles. By the postwar period, he was one of Britain’s most popular actors. After Wilding co-starred with Anna Neagle in Piccadilly Incident (1946), the attractive duo became the nation’s most popular screen team. They were co-stars in six films. By the time they made The Lady With the Lamp (their fifth), the public had come to expect them together.

After Wilding made a move to Hollywood in the early 1950s, his career began to fade. This was partly due to ill health. He suffered from lifelong epilepsy, and it took a toll; by the 1960s he was forced to cut back on film appearances. Fortunately, Wilding had other things to do. He preferred art over acting (“I was the worst actor I ever came across”), and continued painting and sketching for the rest of his life. He didn’t think highly of actors in general, remarking that “You can pick out actors by the glazed look that comes into their eyes when the conversation wanders away from themselves.”

Wilding became Elizabeth Taylor’s second husband in 1952. She later admitted she “wasn’t mature enough for him” (he was 20 years older). Their five-year marriage produced two sons, Michael and Christopher. They divorced when flamboyant showman Mike Todd came along, but remained good friends. Wilding even became a member of her entourage during the Richard Burton years; he and Taylor both had chronic health problems, and still looked out for each other. Travels with the Burtons brought Wilding convivial, supportive company, and kept him close to his sons. He married actress Margaret Leighton in 1964. His last film appearance was a small one in Lady Caroline Lamb (1973), which featured Leighton. In 1979, Wilding died as the result of an epileptic seizure. He fell down a long flight of stairs, and his head injuries proved fatal. He was 66.