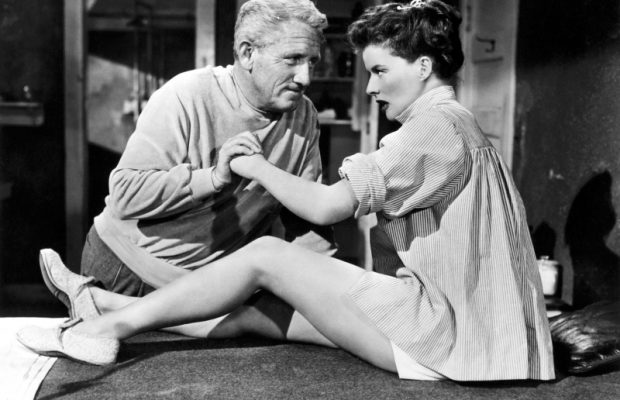 Toronto Film Society presented Pat and Mike (1952) on Sunday, April 29, 1984 in a double bill with This Day and Age as part of the Season 36 Sunday Afternoon Film Buffs Series “A”, Programme 10. 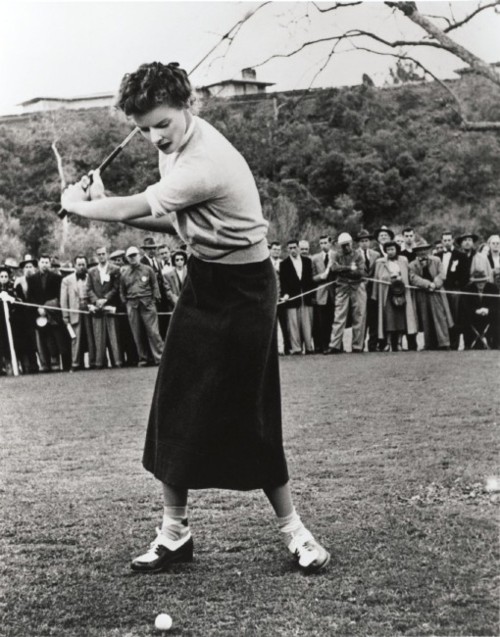 Pat and Mike is one of the best-loved of the Tracy-Hepburn films.  Its purpose was clearly to bring the stars together again with the director and writers of their highly successful Adam’s Rib of two years previously, and the result is about as pleasing.

Hepburn, in her last role under her M-G-M contract, plays a college phys.-ed. teacher who co-incidentally meets a sports promoter, who, for a variety of reasons, exploits her astonishing talents in golf and tennis to turn her into a professional athlete.  The film thus gives Hepburn a chnce to show off her athletic skills at the same time as it allows Tracy the opportunity to play a Runyonesque laid-back ruffian with a heart of impure gold.  One critic called the film a mix of Woman of the Year and Guys and Dolls!

The comedy, for comedy it certainly is, relies heavily on the witty Garson Kanin/Ruth Gordon dialogue.  But with all its fun, the film can also boast of a highly moral message.  After all, it preaches in the Production Code days of Hollywood that honour should triumph over crime and greed.  A more modern reading can find in the film some hearty endorsement of Women’s Lib principles.  For Hepburn (especially with her judo) is physically more than a match for any man.  Moreover, her mind sparkles in a way that her dullard companions can only goggle at.

The film’s supporting cast includes such brawny but brainless males as Aldo Ray, with the fog-horn voice, Charles Buchinski, who would soon become Charles Bronson, and Chuck Connors, on mid-route between baseball and T.V.  The host of honest-to-goodness athletes who turn up in the cast add a curious documentary-like aspect to the goings-on.  But this is counteracted by a remarkable hallucination scene created through some effectively overwhelming special effects.

If the whole enterprise seems somewhat like a throwback to the screwball comedy there may be some reason for it.  Cukor directed Hepburn (with Cary Grant) in both Holiday (1938) and The Philadelphia Story (1940).  And Garson Kanin directed Grant and Irene Dunn in My Favorite Wife in 1940.  Pat and Mike and Adam’s Rib spring up like the Howard Hawks/Charles Lederer films I Was a Male War-Bride and Monkey Business at the end of the 1940’s and the beginning of the 1950’s as comic curiosities in a particularly humorless period of American film history.

Cukor directed Spencer Tracy often enough to know what he was speaking of when he admired Tracy’s acting.  Cukor speaks of one scene in particular:

One of the great big laughs-now mind you, you’ve got to know who’s speaking the line and how good the laugh is–one of the big laughs of the thing “There’s not much meat on her, but what’s there is cherce,” was spoken by Tracy in an almost full-figure shot.  He was turned almost three-quarters away from the audience.  We didn’t cut to a close-up for emphasis–Tracy is such a strong actor.  I didn’t even shoot a close up for protection in case we found we needed it later.  Somehow, we had courage, and we shot it just the way it is seen, just let it go and said, “Well, if it’s good, it’s good.”

Afterwards, Tracy was very amusing about it.  When people would say “Oh, you were just great in it,” he’d say, “I was just as great in the last picture, but I didn’t get a laugh at all.  It must have something to do with the material.”  He gave due credit to the situation the Kanin’s had created.

On the film’s success, Cukor had this to add:

The reason this comedy and its predecessor Adam’s Rib, worked was that none of us took ourselves very seriously during the writing and preparation.  We batted ideas around like tennis balls, we all felt the lines and situations without any kind of ghastly solemnity.  If we all laughed, a line went in.  I remember there was a scene in which Spencer massaged Kate’s leg.  No sex implied, but it was very sexy.  You sensed the empathy between these two.  We had wonderful fun working out that scene.

And that’s just what the film conveys.  Fun!