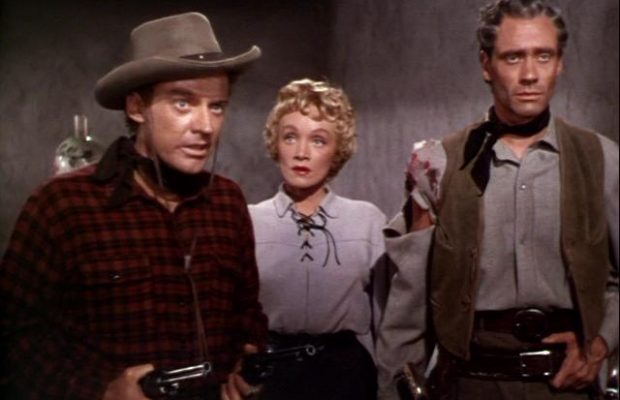 “The general theme of my films is the fight of some individual against what the Greeks and Romans called Fate, which takes the form of some power, a dictatorship, a law, or a crime syndicate.”  Fritz Lang’s summary of his oevre serves to introduce the basic premise of Rancho Notorious, but the film also portrays the struggle of man against himself.  This emphasis on choice and free will led the French critics to view it as an “existential Western”.  As with Johnny Guitar, several of the elements of the film noir were incorporated into the Western genre–the crime syndicate (outlaws), the femme fatale, the isolation and insecurity of the central character, and the plot of revenge and retribution.  The themes of “hate, murder and revenge” provide the psychological motivation which blends into the adventure drama of the Western to form a tragic, doom-laden whole, precursor of the dark visions of Sam Peckinpah and Arthur Penn.

Lang was upset for many reasons over this film: his conflicts with Marlene Dietrich (whose refusal to adhere to the role of Altar as an aging saloon singer led her to play the character younger and younger as the film progressed) were compounded by his bitterness over the director’s lack of copyright–the title was changed by Howard Hughes, and the film was re-cut by the producer after Lang had finished it.  Nevertheless, it remains one of his best works of the final period.

The most interesting techniques used by Lang in Rancho Notorious were the ballad-theme song and device of flashback.  It is the first use of a recurring theme song as commentary on the narrative and was popularized later that same year in High Noon.  The ballad, “The Legend of Chuck-a-Luck”, enhances the film with a quality of fantasy or folklore and develops the rhythm of the action to correspond to the psychological reactions of the characters.  The flashbacks of Altar’s former life as a glamourous saloon singer, with all the famous Dietrich signatures–the stunning costumes, the cigarette dangling from the lips, the sultry back-talk–were also intended to sum up the actress’s former career, recreating the most familiar parts of the Marlene legend.  The Mystery of the femme fatale is thus linked with the film noir element of the hero’s obsessive quest.

Like the Vienna character of Johnny Guitar, Altar Keane is the flamboyant back-talking leader of a group of outlaws, whose problems arise from her misbegotten emotional attachments.  Although critics felt that Marlene Dietrich’s style did not particularly belong in the conventional Western mode of timelessness, her performance in the film was successful enough to lead to a cover story in Life magazine on “Dietrich and Her Magic Myth”.  Unlike Sterling Hayden in Johnny Guitar, Arthur Kennedy as the male hero completely wins the audience’s sympathy in a character which is perhaps more convincingly developed and motivated.  In his search for revenge, Vern sinks into the typically “noir” morass of guilty hopelessness, thus driven from innocence to criminality.  As the master outlaw, Mel Ferrer plays Frenchy with a certain reserved dignity.  The doubling of the male and female characters, the murdered Beth and the Murdered Altar versus the two male outlaws who ride away together at the end of the film, also depicts the undercurrent of Freudianism of the 50’s films.