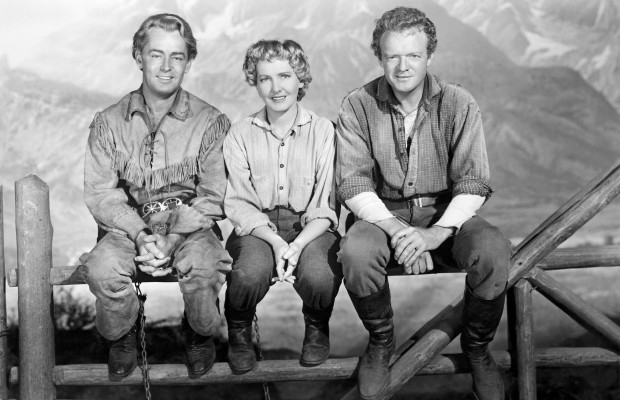 In 1953, the ads read: “There never was a man like Shane.”  And, before or since, there has never been a motion picture like Shane.

George Stevens, a director of awesome talent and impeccable taste, took one of the oldest themes of Western movies–that of the homesteaders vs. the cattlemen–and created a classic.

Released with no great expectations by Paramount, Shane streaked ahead at the box office, grossing a huge $9 million, in short order.  Today, Stevens’ film is regarded by many as the greatest Western ever–a fitting memorial for the director, and his star, Alan Ladd, whose finest role this was.

The picture’s lasting greatness lies in Stevens’ superb visual sense (helped by Loyal Griggs’ magnificent photography), the director’s keen eye for detail, his ability to tell the story at just the right pace, and the characters brought to life by seasoned performers such as Van Heflin, Jean Arthur, Ben Johnson, Jack Palance, Emile Meyer, et al.  And, in an unforgettable performance, young Brandon de Wilde as Heflin’s young son, Joey, who finds his hero in Shane.  In the title role, Alan Ladd brought a wistful, almost melancholy touch to his portrayal of a gunfighter trying to forge a new life.

Stevens wisely followed Jack Schaefer’s original novel closely, particularly the idea of telling the story from the viewpoint of young Joey.  He filmed the picture on location, letting the

drama unfold against the rugged grandeur of Wyoming’s Grand Tetons.  Even twenty-five years later, many of the scenes linger in one’s memory: Shane riding up to the Starrett farmhouse in the soft light of dawn; the gunfight between Jack Palance and Elisha Cook, Jr. against a backdrop of storm clouds; and  Shane’s final, deliberate midnight ride into town.

The atmosphere of pioneer life is beautifully captured: Shane and Joe Starrett uprooting a tree stump; a Fourth of July picnic; a community meeting of the farmers; the realistic, unglamorous, crude settlement; the hopes, uncertainties and fears of the homesteaders.

Van Heflin is fine as the hard-working, resolute, undemonstrative farmer, Joe Starrett, too busy to get close to his wife or son, and nearly losing them as a result; Jean Arthur, of the delightfully husky voice, warm, loving, sincere, attracted against her will to the mysterious Shane; Ben Johnson as the tough, bullying, but ultimately decent ranch foreman, Chris; Emile Meyer as Ryker, the rancher who resists change as represented by the homesteaders, moderate at first in his tactics, describing eloquently his point of view, but ultimately resorting to bloodshed to hold onto his own.

Finally Shane, his back to the wall, realizes that he cannot run away from what he is, and straps on his gun once again to prevent Starrett, the man who befriended him, from being killed.

From time to time in recent years, various ill-advised producers have advertised their Westerns as being in “The great tradition of Shane“.  This is mere egotistical foolishness, however, for Steven’s masterpiece has never been equalled, and, in this writer’s opinion, never will be.

There is a social purpose which is served by film genres and there is some point in personally knowing about them.  Their development and employment concomitantly affords a special aspect of artistic connectivity and that kind of vital familiarity which in art can spring from the union of the known and the novel but which is never the progeny of either some simple form of repetition or any tenacious avoidance of precedent.

In terms of the number of films that have employed the Western genre, one might expect audiences to be more conversant with the criterial attributes that are used in forming the ideal

type of the Western.  Unfortunately, with the tendency to associate Westerns simply with childhood Saturday afternoons or with their later television counterparts, it seems that many people have come to the conclusion that as an art form the Western is somehow beneath them; therefore, many people seem to feel that they need not know anything about the Western as a film genre.  Yet the relentless truth is that even an approximation of a full appreciation of a work of art that is clearly and intentionally an example of a film genre, as Shane is consciously and uncompromisingly an exemplification of the Western, is dependent upon a clear recognition of the specific criterial attributes which define that film genre.  Without a conscious recognition of the necessarily somewhat abstract and more or less general criteria which serve to define a film genre such as the Western, the more individualistic variations developed and elaborated in a particular work of art, and which tend to distinguish one exemplification of that film genre from other exemplifications of it, will elude appreciation.

The defining characteristics of the Western can probably be reduced to two criteria.  The first of these is that the focus of action is essentially a lawless arena.  In the case of the American Western this is usually the last third of the nineteenth century, give or take a decade.  The second criterion is that the focal character is for all practical purposes a wanderer characterized by a restrained martial expertise which, in the course of the action, is exercised in the service of “the good” but who remains an essentially rootless wanderer since an indefinite period before the beginning of the action or may acquire that status in the

opening sequences.  Also in the American Western, the martial expertise is in the form of fisticuffs and the use of guns.  The set of interests which constitute “the good” may be so culturally defined as to be obvious or so understated that it becomes discernible only in the light of the protagonist’s allegiance.  The essentially solitary life of the protagonist, though related to his status as a wanderer, is usually reinforced by his martial adroitness.  It is compatible with periods of male camaraderie but is seldom more than tangentially compatible with the world of women.  To an astonishing extent Shane stays within the formal structures of the genre and develops its depiction of heroism not from imported motifs but from the trends to accentuate the heroism of Shane in that the heroism more clearly derives from characterlogical rather than physiological attributes.  Quite simply Alan Ladd has many of the physical appearances of the great American boy/man just as the physical appearance of Jack Palance seems to embody the effects of evil.  It is not just that Stevens has the audacity to costume his villain in black and his hero, if not actually in white, then in buff.  Even if the colour of the costumes were to have been reversed, the physical types of the actors tend to tell you who is the hero and who is the villain.  There is to Ladd some unstated heroism even before he has done anything heroic just as to Palance there is some unstated villainy even before he has done anything villainous.

The setting, the scenery and George Stevens’ use of deep focus give the picture a visual richness that seems to grow from the genre rather than being imposed upon it while Stevens’ use

of camera angles and montage along with his calculated blending of “natural” sounds with the musical score by Victor Young give the picture a visual and auditory interest that sustain Stevens’ gradual development of the basic genre components into a story about real people.  In most Westerns which stay quite close to the basic genre, the director will accelerate the pace of individual scenes and even abbreviate them in order to maintain a sense of movement.  This is often done at the expense of characterization which to be developed cinematically requires time not simply tempo.

One of the characteristics of Shane is that it is constructed in a kind of cinematic equivalent to sonata form.  Sonata form in musical composition is defined as “an exposition in which the main themes are stated, a development section, a recapitulation of the material in the exposition, and, usually, a coda” where a coda is defined as “a more or less independent passage, at the end of a composition, introduced to bring it to a satisfactory close”.  The opening sequences of the film can be seen as stating two themes–one is the diminutive stature of the individual against the grandiosity of untamed nature and the other is Shane’s sensitivity to guns and his speed and adroitness in their use.  The first is achieved with a long shot which captures the arrival of Shane at the Starrett ranch and the second with Shane’s almost automatic but swift and

accurate response to the click of a gun used in play by Brandon de Wilde.  These two themes are woven together in many variations throughout the film and at the end are recapitulated in reverse order with Shane’s shootout in the saloon and then his departure from the Starrett ranch.  The closing sequence of Brandon de Wilde chasing Shane, crying out his name and imploring him to come back constitutes a highly memorable coda.