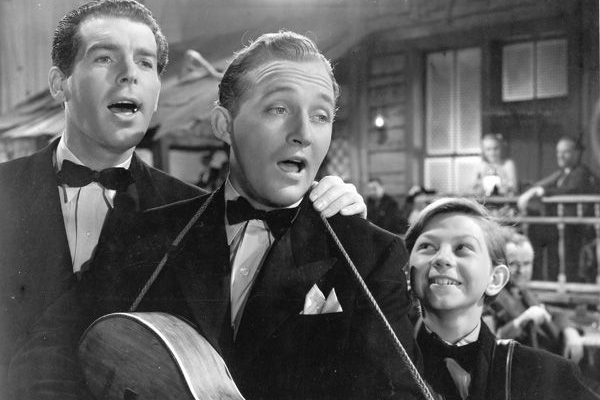 Toronto Film Society presented Sing You Sinners (1938) on Sunday, March 31, 1985 in a double bill with Three Smart Girls Grow Up as part of the Season 37 Sunday Afternoon Film Buffs Series “A”, Programme 10.

By 1938, Bing Crosby had established himself as one of the most popular and durable light leading men in motion pictures.  His musicals and light comedies had all been enormously successful at the box office, and his status as one of the screen’s most likable personalities was generally acknowledged.  But whether Crosby could successfully handle a serious dramatic role had yet to be resolved.

For this reason, Sing You Sinners rates an extremely important place in Crosby’s film career.  A seriocomic contemporary drama concerning the exploits of a shiftless young gambler and his patient, loving family, it was the very film to offer Crosby a screen role of pith and substance, in which he could demonstrate his ability as a dramatic actor.  Most of his previous screen roles had been limited to portraying charming, romantic, and carefree crooners, always involved with either abandoned children, runaway blondes, villainous gangsters, or homeless old people.  This type of role admittedly fit Bing Crosby like an old glove, but it never allowed him to show the true depth of his talent.

Crosby possessed a natural acting skill that could be easily applied to virtually any kind of screen role.  This skill would eventually blossom during the forties and fifties but it had remained sadly neglected in his films before Sing You Sinners, possibly because the studio was reluctant to cast Crosby in a role that might alter his popular image as the screen’s favourite crooner.

Crosby took full advantage of his first opportunity to enact a screen role of dimension and depth.  His Joe Beebe is a deceptively complex man, seeming contented and carefree on the surface but frequently given to moments of introspective despair and self-doubt.  It is a skillful characterization, revealing for the first time the more serious side of Bing’s talent.