Toronto Film Society presented Singin’ in the Rain (1952) on Monday, August 8, 1977 in a double bill with Monte Carlo as part of the Season 30 Summer Series, Programme 5. 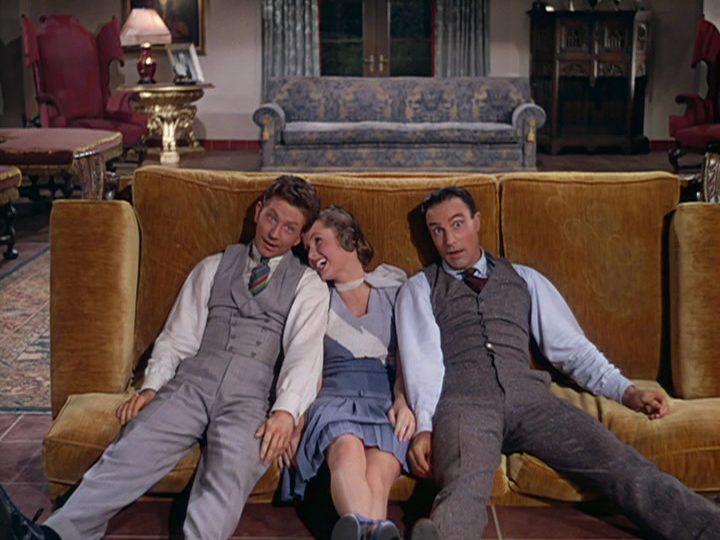 Singin’ in the Rain is the second of three beautiful musicals co-directed by Gene Kelly and Stanley Donen for M.G.M.  The others are On the Town (1949) and It’s Always Fair Weather (1955).  On its first release, tonight’s film was received well but not rapturously.  Many critics thought they preferred On the Town but, ironically, in succeeding years it is Singin’ in the Rain that has built the greatest reputation.  No doubt this is partly because it is a “movie movie” at a period when film references and in-jokes are greatly enjoyed, perhaps too much so.

The satire on early sound film-making in Hollywood is still sharp and biting and one feels that Arthur Freed–who was around at the transitional time–may have contributed some of the authentic feeling.  His songs had been featured in such early musicals as Broadway Melody (1929) and became “standards” at M.G.M.  Judy Garland sang “Singin’ in the Rain” in Little Nelly Kelly and, in 1972, two Freed-Brown numbers were interpolated into The Boy Friend.  Currently, “You Are My Lucky Star” is warbled by Liza in New York, New York.

Comedy by Comden and Green can be more than sharp, it can be quite cruel.  The unflattering portrait of silent queen Lina Lamont, that “glittering star of the cinema firmament“, might be distasteful if it were played less superbly than by Jean Hagen.  Miss Hagen, a fantastically talented and versatile player, never had enough opportunities in films but she did also shine in Adam’s Rib and The Asphalt Jungle.