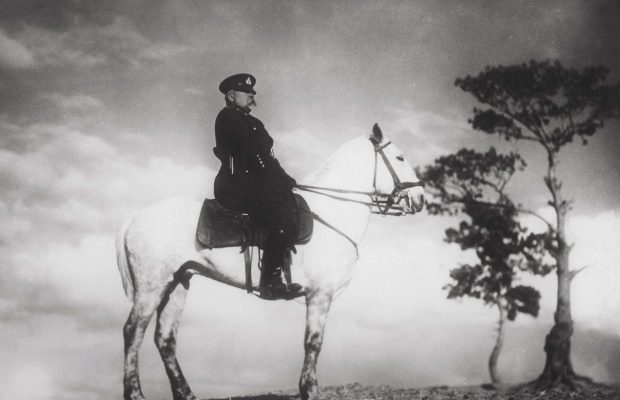 The Work of Pudovkin

Vsevolod Ilarionovich Pudovkin was born in 1893 (his father was a commercial traveller of peasant stock).  He majored in physics and chemistry at Moscow University, served in the artillery in World War I, spent three years in a German prison, profitably spent learning foreign languages. Escaping and returning to Moscow in 1918, he worked as a chemist, pursuing painting and music by night–until a look at Griffith’s Intolerance got him interested in the cinema.  (Only Eisenstein’s Potemkin and Chaplin’s A Woman of Paris ever made as deep an impression on him.)  After studies at the first State School of Cinematography, he worked as a scenario writer, assistant director and actor (notably in a fine performance in Tolstoy’s The Living Corpse) before settling into his distinguished career as a director.  Pudovkin is often compared or contrasted with that other Soviet film titan, Eisenstein.  There is much similarity in their epic social themes and use of montage; the main difference perhaps is that in Eisenstein’s films the masses were the “hero”, whereas in Pudovkin’s the hero is the personification of the masses.  Eisenstein was more concerned with the great sweep of crowds and events, Pudovkin more with the specific people involved.  “Eisenstein’s films resemble a shout”, wrote French film-historian Leon Moussinac, “Pudovkin’s a song”.  Arthur Knight in The Liveliest Art says: “When one thinks of Pudovkin it is invariably in terms of the marvellous moments of character revelation with which his films abound. He knew how to make one feel with people their joy, pain, victories, defeats.  From his collaboration with Pavlov on Mechanics of the Brain (1926) he learned, perhaps better than any other film-maker, the nature of reflexes and reactions.  In his pictures one is always tactilely aware of the world in which his characters move–of the impact of a blow or a bullet, of breathless flight or impassioned resistance.  He portrayed the individual as a social being, and sought to create in his films the dynamic relationship between a man and his background, the impact of ideas and events upon his character.  ‘Brick by brick’, he described his method of building a film–brick by brick, solidly, the way a good mason constructs a wall.”

A topical short comedy about the International Chess Tournament, this was Pudovkin’s first film, and a surprisingly light-hearted item in his roster of serious themes.

This is a story of the period of foreign intervention in Russia after the Revolution, of a native Mongolian peasant whom the occupying authorities groom as a puppet leader of his people to bolster their position, but who eventually turns on them and leads his people in rebellion.  The MMA print we are showing is the most complete one available; a sequence detailing a surgical operation was removed for public showing even in Russia.  Several years ago the Soviets released a re-issue version in sound, in which music, sound-effects and full dialogue were dubbed onto the original visuals with remarkable skill, with, of course, English subtitles for export.  This version was shown a few years back by Summer Cinema.  Unfortunately, in an effort to avoid excessive speeding up of the visuals run at sound speed, a device known as a “stretched print” was employed, resulting in oddly slow, jerky and unnatural movement by the players.  Also, unaccountably, the final remarkable, imaginative and almost surrealistic storm sequence had been deleted.  Maybe it didn’t fit in with then current notions about “socialist realism”!

Lewis Jacobs, in dealing with Pudovkin’s style and the constructive of Storm Over Asia, describes the “progress from the general to the particular” in the opening shots of the film–the clouds, the hills, the land, the hut, the inside of the hut, its inhabitants, the sick father.  “The next sequence reverses the pattern; progress is from the particular to the general”–detailed shots of the characters gradually become medium shots–then as the son rides off, more and more distant shots of the rider and of the home and mother he is leaving behind.  The first sequence has begun slowly, ended rapidly; “the second begins with a fast beat, ends with a moderate one.  The formal opposition of the two sequences creates a pattern of continuity in time which is characteristic of the whole film.  In the middle part of the picture, parallel and contrast cutting are used with telling effect, and a rhythm deft and precise–by referential cross-cutting of contrasting scenes, Pudovkin achieves a bitter irony.  The end of the film, a simple double exposure, illustrates a profound use of symbolism, a powerful example of the implanting of what Pudovkin calls ‘an abstract concept into the consciousness of the spectator'”.

Bardeche and Brasillach: “In Storm Over Asia, nationalism and propaganda are curiously mingled.  The film swings between melodrama, symbolism, document, and the simple adventure film–at times dangerously.  Parts of it are extraordinarily beautiful, like the trenchant caricature of the General preparing for the ceremony (that Oriental ceremony in which Pudovkin perhaps gave way too much to his love of the picturesque and, still better, the wonderful fair at the beginning of the film.  Light seems to cling to the furs, the seething crowd is disposed on the screen in a series of vast compositions which loom up slowly from the darkness, in the manner so dear to the Swedes.  We are immediately captivated by the very first shots, so softly and gently gray, which gradually bring us nearer by three removes to a hut lost in the immense plains.  The revolt of Bair and the riot in the market are handled with a brio and an impetuosity that the best American films come short of.  Throughout he lavishes the greatest care on faces, facial contours moulded by time and worn by grief and toil; those admirable human compositions to which the Russians are so responsive.  The professional actor, Inkizhinov, is wholly worthy of these natural artists, and no greater praise is possible.  The rest of the adventure–the great symbolic tempest and Bair’s ride in the wind which carries off the invaders and the dead leaves–verges on melodrama in the manner of Gance.  What is memorable is the opening, the sovereign skill in interpreting folklore and ancient customs, and a great love for peasant epics and the human face.”

Arthur Knight: “In Storm Over Asia Pudovkin refined and polished his technique to an astonishing degree, achieving a precision of plastic expression never excelled.  One sequence of great complexity (the British soldier and the Mongol he has been ordered to shoot) is played completely without titles, yet every turn of the action, every nuance of mood and motivation is crystal clear.”

Paul Rotha: “With Storm Over Asia Pudovkin rose to the height of his career in some sequences, whilst in others he lost the thread of his theme by interest in local environment.  The whole effect was one of unevenness.  In company with Mother and The End of St. Petersburg, it was a masterpiece of filmic construction, of referential cross-cutting, and of the representation of mixed mentalities.  The whole of the first part was magnificent.  Thereafter the theme inclined to wander, to be interested in local detail rather than the significance of that detail.  There were moments of great power, however, as when the British soldier took Bair to be shot; the witty cross-cutting between the General’s wife dressing and the preparation of the lamas for the festival; and the terrific storm scenes at the close.  These were Pudovkin at his best and most emotional; but the film as a whole was broken-up and over-long.  Pudovkin preferred, whenever possible, to work with raw material, building it in terms of filmic representation to achieve his desired result. Consequently he has filled his pictures with the most remarkable types of many nationalities. Storm Over Asia, in its fur market scenes and the festival of the lamas, brought material to the screen that had never before been photographed.  The types were as amazing as the peasants in Eisenstein’s The General Line.”

Pudovkin’s Mother and The End of St. Petersburg were both shown by TFS Main Series several years ago.  The Silent Series would love to show his Mechanics of the Brain, but it’s available in 35mm only.  Perhaps, some day, if we’re no longer limited to 16mm!  Among his other films (sound) are The Deserter and General Suvorov.  The last picture he made prior to his death was The Return of Vassili Bortnakov, in color–a strange mixture of lyrical drama and inept collective-farm propaganda that played briefly in Toronto at the now vanished Variety Theatre.

We would much appreciate your marking the films of the past Season (listed below) you thought the best (after, of course, you have seen tonight’s film!).

Kindly leave on the chair by the door, or (if you want time to think it over) mail to G.G. Patterson, 10 Bowden Street, Toronto.

Uberfall
The Life and Death of 9413, a Hollywood Extra
L’Etoile de Mer
In the Street
Rhythmus 21
Rain
Chess Fever