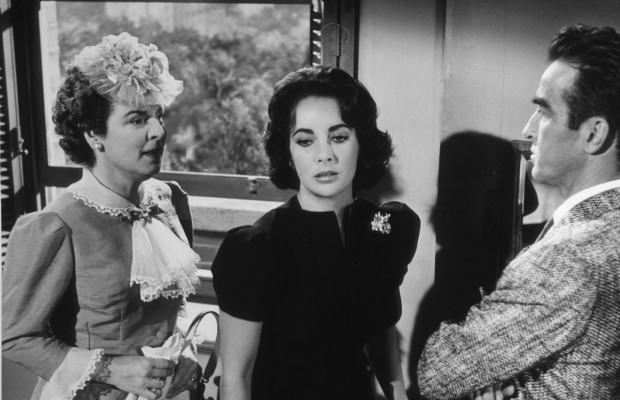 Tennessee Williams’ Suddenly, Last Summer is essentially a Darwinian play depicting a struggle for survival in which the strong are bloody in tooth and claw (technically Social Darwinism).  The key to this theme is given early in Violet Venable’s long monologue in which she recounts her son Sebastian having seen the face of God in the Galapagos where carnivorous birds swoop from the sky to devour newly hatched sea turtles.  This long speech is linked to Catherine Holly’s monologue toward the end of the play in which she recounts her summer with Sebastian and remarks that “All summer long Sebastian was famished for blonds.”  In Williams’ one act play the effect of Catherine’s monologue is to infuriate Violet, to intensify her insistence that she wants that story cut out of Catherine’s head.  The chilling climax fashioned by Williams resided in the realization that the story of what happened suddenly, last summer will be cut out of Catherine’s head.

Even though the screenplay is credited to Williams and Gore Vidal, to understand Suddenly, Last Summer one has to understand that it became a Mankiewcz film dealing with Mankiewicz’s preoccupations without fully ceasing to be a Williams film dealing with Williams’ preoccupations.  As a Mankiewicz film, it shares many characteristics in common with his other films, such as A Letter To Three Wives (1949) and All About Eve (1950) (both shown by TFS on 4 February 1980).  In our notes on those films we remarked on the characteristically memorable, dominant women in Mankiewicz’s films.  “Woman” for Mankiewicz is a locus of dominating power yet, in most of his films, “woman” is ultimately subservient to “man.”  This later aspect is a reflection of Mankiewicz’s leaning towards romanticism.  In turn, this duality of woman gives form to Mankiewicz’s conception of marriage and its functional alternatives as a meeting place which is ultimately fragmented.  Mankiewicz sees human relationships as a quest for permanence; no matter how manifestly transient.  Mankiewicz’s conception of relationsips is that of an attempt to barter with essential human predicament that we have not always existed, that we will not always exist and that so long as we do exist, we are essentially alone.  This view of human relationships including marriage and the presence of strong women is not inconsistent with Williams’ preoccupations.  Mankiewicz’s film differs from Williams’ play mainly in the way that it introduces Mankiewicz’s brand of romanticism when dealing with these preoccupations.  Mankiewicz shifts the focus of the story by interjecting his romanticism and thereby dilutes the thematic thrust of Williams’ play.  Mankiewicz’s film does, however, retain the poetic quotability of Williams’ play and as a result it is largely devoid of the caustic wit that usually characterizes a Mankiewicz film.

As the film progresses, Mankiewicz increasingly chooses to romanticize, e.g., the brain surgeon, who in Williams’ play is depicted as glacially brilliant, was cast with Montgomery Clift who is manifestly “sensitive” and “kindly.”  Mankiewicz creates an illusion of romance by his casting of Clift together with Elizabeth Taylor.  Though these changes muddy the thrust of the story, they do provide Katherine Hepburn with the most brilliant mad scene to be filmed since Gloria Swanson’s descent of the staircase at the end of Sunset Boulevard (1950).  The film allows the audience to leave thinking that the good triumph, a fact not lost on the producer, Sam Spiegel, who made a great point of this in the publicity.  But the entire thrust of Williams’ play is that the strong triumph, not necessarily the good.

That as much power adheres to the film as it does has to be credited to the evocative imagery of Williams’ language and the superb performances which Mankiewicz elicited from Katherine Hepburn and Elizabeth Taylor.  Also, the set decoration and art direction manage to convey a lot of the meaning of the film, saying much non-verbally that would have been censored had it been spoken.  The film picked up academy awards for Scott Slimon’s set decoration and for the art direction of Oliver Messel and William Kelner.  Both Hepburn and Taylor were nominated for Best Actress but as is commonly the case in dual nominations, the vote was split between the two and neither won.  (This also happened with Bette Davis and Anne Baxter in Mankiewicz’s All About Eve.)