DESIGNED AND CREATED by Oskar Fischinger

One of the few original film-makers, Fischinger’s pictures represent the first rank of cinematic expression in the non-objective school.  These examples of his early experiments in Germany in which he sought to match abstract moving cine-diagram patterns with music are unique because of the solid unity of sound and picture.

Fischinger calls his pictures “absolute film studies.”  All represent the flood of feeling created through music in visual, cinematic terms by colour (today) and graphic design welded together in patterns of rhythmic movement.  Employing the simplest kind of shapes–the square, the circle, the triangle–he manipulates them along a curve of changing emotional patterns suggested by the music and based upon the laws of musical form.  By this means he creates a unique structural form of his own in which can be sensed rocket flights, subtly moulded curves, delicate gradations, as well as tight, pure classical shapeliness–all composed in complex movement with myriad variations and with superb technical control.

Fischinger, in America for the past twelve years, has been working on the problems of design, movement, colour and sound.  In addition to making a sequence on Bach’s “Toccata and Fuguen” in colour for Disney’s Fantasia, he has made three other colour pictures in the U.S.  Allegretto, an abstraction to jazz, Optical Poem to Liszt’s “Second Hungarian Rhapsody” (for MGM) and An American March to Sousa’s “Stars and Stripes Forever”.

Manvell’s Experiment in the Film

The producers call this film a “Related Documentary.”  A highly original blend of satire and poetry, it presents a humorous and poetic impression of the California Beach, contrasting the languors of a summer afternoon with the fervour of exercise devotees.  The witty counterpoint of sound (the song) and image reflects the charming pliancy of its mood; the whole is a unique virtuoso achievement.

André Thirifays in writing ‘the Potentialities and Limitations of Films abut Art’ (UNESCO 1951) comments, “In my opinion, films on art are more successful when, instead of attempting to give a colourful picture of incidents from an artist’s life, they use their special power of creating impressions or stirring the emotions for the purpose of revealing the depths of the artist’s soul through a study of his work.

Resnais, in his Van Gough, partially succeeds in doing this, but the most felicitous experiment in this very subtle film-type is Henri Storck’s Le Monde de Paul Delvaux, a film in which all the magic of the unfamiliar comes into full play.  Images, words and music combine closely to make an harmonious whole; it proves no thesis but gives a breath-taking vision of a dream-world.  In the space of eleven minutes, the film takes the spectator on a fantastic descent into hell and invites him to explore the symbolic mirrors in which a man’s conscience is reflected; it emphasizes the vast distance which separates the external man from his inner consciousness, that part of himself where in all his experiences are brought together in synthesis.  After such a film, any further enquiry into the life of this painter inevitably appears trivial and impertinent.”

It is the movement of the camera itself which in this Storck film determined the creative element.  It added, supported by the music and the spoken verses of Eluard, life to the work of Delvaux, which his single paintings lack.  That this film achieved the feat of being ’round’ like a poem is largely due to the fact that Delvaux’s pictures are populated by the same type of women (mostly nudes) and men, the same melancholy, the same sensualism.  It is probably the most beautiful film on art hitherto produced. 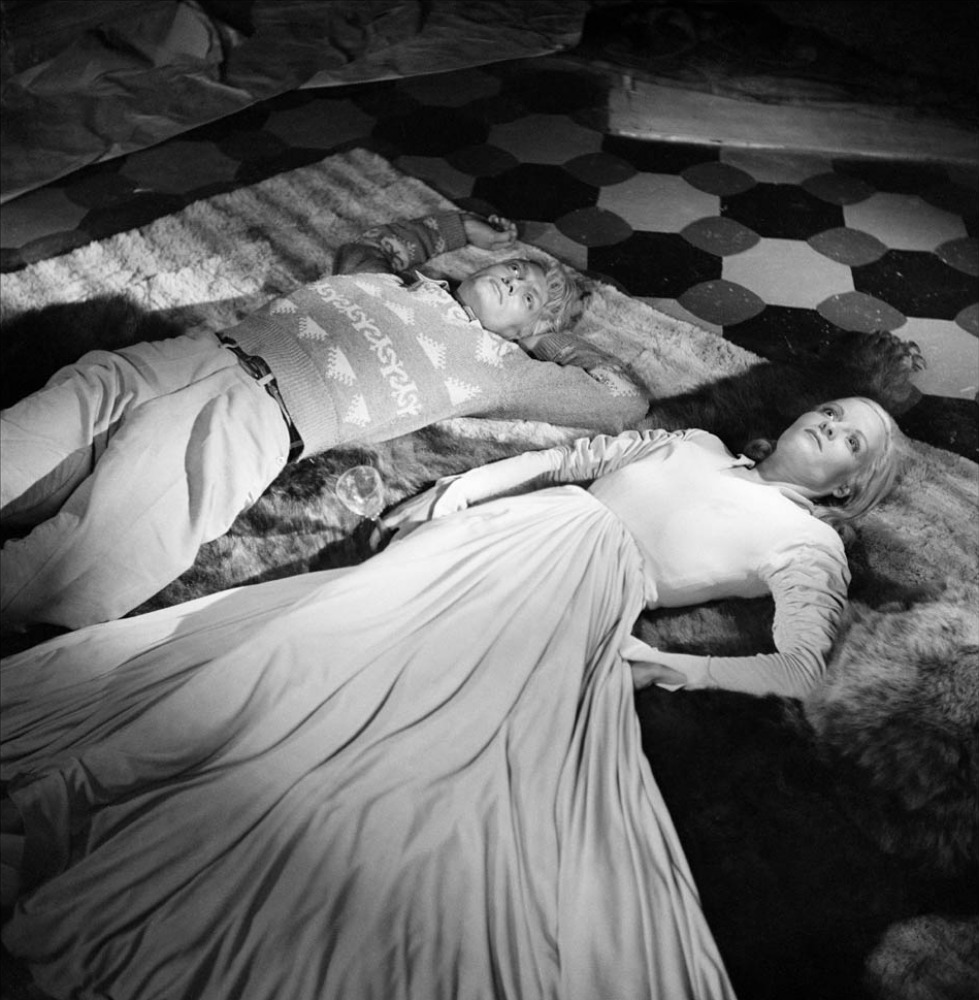 Jean Cocteau has always been a controversial storm centre in films, as elsewhere.  His first movie, the much-lauded, much-loathed Blood of a Poet still divides film-society members into warring factions.  From surrealist avantgardeism he has turned variously to realistic, bitter social comedy (Les Parents Terribles), sheer fantasy (Beauty and the Beast), modernized romantic legend (Eternal Return) and a combination of the latter two genres in his latest, Orpheus.  Each in turn has its vehement devotees and detractors.

Eternal Return is a modern re-telling of the legend of Tristan and Isolde.

“The film has remarkable technical beauty.  Literary though its conception and dialogue are, it has been planned with the firm intention of using the resources of the medium.  The photography is on a high level.  Throughout the treatment of the action the devices of cinema are brought into play.”

“The film does not altogether succeed in its juxtaposition of heroic legendary figures and smaller, more complex characters, but this is inherent in the emotional conception, not in the form, which is remarkable.  The story is, externally, according to the legend–the motivation of these events, though, is Cocteau’s own.  Patrice and Nathalie die not through the jealousy or opposition of Marc (her husband, Patrice’s uncle–Ed.) but through the unmovable antagonism of Achille (the dwarf) with his natural cruelty, his self-hatred, his contempt for his mother tempered by an oedipus complex.  It is he, not the lovers, who embodies the ‘rejection of life’ which several critics have disliked–if the film is morbid, so is the legend, and to separate one from the other, to attempt to discredit the film further by accusing it of Nazi ideology (it was made under the occupation–Ed.) seems wholly illogical.  The idea that the lovers represent pure Aryans and the opposition decadent French people seems altogether too oblique to be effective.  The flaw of L’Eternel Retour lies in the relative eclipse of the lovers by the powerful and emphatic portraiture of their enemies.  Marc’s family are brought unmistakably to life and brilliantly acted.  Their naturalistic treatment makes the formal approach to Patrice and Nathalie appear even more stilted.  The lovers have the gestures and trappings of passion, but they do not communicate it.  This is really Cocteau’s limitation.  His art frequently idealizes the conception of love–which finds it consummation only in immortal death–it is not moved by, and does not bring passion to, the experience of heterosexual love.  Stylistically, there is much to admire.  The slow, controlled rhythm allows one to absorb the contrast between the enchanted world of the lovers and the realistic dissection of marc’s family.  The technical collaboration of Delannoy does not seem to have created any serious disturbances in style, though at times he gives the film a stiffness which, on the evidence of both his and Cocteau’s later work, is his own characteristic.

It is clear that they worked very closely together on the film, and perhaps without much difficulty, for though Delannoy is a skilful craftsman who has developed a taste for ambitious subjects, his films are usually lacking in atmosphere–and L’Eternel Retour is impregnated with atmosphere, unmistakably distilled by Cocteau.  When the film fails to appeal to the emotions, it still touches the sensibilities.  This atmosphere–is the pure essence of imagination, casting its spell without any trickery or obvious effects of style.”

From an article on Cocteau’s films by Gavin Lambert, in Sequence, No. 12

NOTE:  It is unfortunate, but we think not catastrophic, that in the print of Eternal Return available to us, (due to some rather inexplicable actions variously attributed to the New York censors, the Legion of Decency and the Quebec censors–the latter seems most likely) some of the earlier love scenes have been shortened, and the ending of the film, in which Nathalie dies beside Patrice’s body, has been eliminated.

Favorable comments:  “I wish this type of film was made today.  Possibly our sense of humor today doesn’t warrant such simple, wonderful fun”—-“Ingenuity of fine comedy enhanced by remarkable clarity of print—it is regrettable that such comedy classics do not get wider circulation—members should feel very privileged to be able to see them”—-“Satire and bits of rare subtlety not seen in modern efforts”—-“Really charming; quaintness of 25 years ago adds to the quality”—-“Wonderful sense of the comic is superb and cannot be touched by comics of today”—-“Ah me!  What a riot”—-“Fast, amusing, dry”—-“Marvellous sustained comedy”—-“Ingenious visual comedy construction—the never failing inventiveness that seems to have vanished from film comedy—inspired development of gags”—-“thoroughly enjoyed it”.

Unfavorable comments:  “Very funny in parts; slow and tedious otherwise”—-“Beginning slow—I’d have been happier if setting had been other than wartime—liked The Navigator better”—-“Thought the pace might have been a bit faster; was it run at 24?  seemed like 18”—-“Feel doubtful if it is possible to rate it against today’s standards; as an old film delightful, but obviously nobody could start making that sort of picture today.  This is no ‘unfavorable comment’, just a reflection”.

Animules:  “Cleverly done”—-“Excellent–teaching in novel way”—-“Very good; children so natural”—-“Have never been able to share the general high enthusiasm for this competently made and pleasant enough little effort.”

Begon Dull Care:  “One of the most unusual and entertaining shorts I’ve ever seen—quite equals other McLarens and deserved it special award—would like to see it again”—-“Music excellent”—-“Tremendous!  Still McLaren’s masterpiece”.

Ruby Ramsey Rouse’s piano accompaniment to The General evoked cries of “Hurrah! Hurrah!, “Wonderful”, “A large orchid”, “Just the right touch”, “Special thanks”, and “The music seemed to add words”.

One member expressed pleasure at the lobby display and thought it “so nice to be able to poke the animules to see how sturdy they were”.  But the same member cried:  Hangnails and bunions to whoever was responsible” for the Mail Early trailer.  We must humbly apologize for this; we did order the McLaren one and had fully expected to receive it.  In spite of this, one member, in perhaps an excess of Yuletide kindliness, termed “Excellent”!