Yannick Bellon’s extraordinary study, Goëmons is a brilliant and haunting film–a powerful impression of a dying island community off the coast of Britanny.  The study is reminiscent at times of Vigo, but is certainly not derivative.  Its strong masculine style comes as a surprise, for its director is a girl–she was in her early twenties when she made the film.

The print has no English titles; an outline of the commentary follows.

Beniguet, the “blessed isle”, is one of a group of small islands which lie two hours by sea from Brest.  There is neither church nor lighthouse nor tree on Beniguet; only a single farm, where the farmer and his wife live with a dozen workmen.

Why they work on the islands, no one can tell.  Engaged by the farmer one evening on the coast when they were drunk, they make no attempt to leave.  Seaweed, sea, weariness, the drunkenness of Saturday night; they know nothing else, and seek nothing else.

During the winter and early summer, they collect the “goëmon d’epaves”, the “seaweed of wrecks”, washed up from the depth of the sea, and rich in iodine.  This is the real wealth of the island.  After being dried, the seaweed is burnt, and the resulting deposit sent to the mainland where the iodine will be extracted.  In the summer, the islanders are joined by others from the mainland, with boats.

At other times, the islanders collect the “goëmon noir”, which is useful only for fuel or fertiliser.  Sometime, boats come from Brest to collect shingle which is used in the foundations of the houses.

Dédé, one of the workmen, who broke his spine many years ago, and who now looks after the horses, sometimes thinks of the mainland.  Especially on Sundays, when he listens to an old gramophone.  Behind the music, far away, there is the hint of something believed long forgotten, the joy of living.  Dédé is tempted to leave the island at such moments; he walks along the beach looking out for a passing boat.  But no boat comes and in the evening, when he is hungry, Dédé will return as always to the farm.

Notes on content by courtesy of Weymouth Film Society, England

This short account of Norman McLaren at work presents camera glimpses of his methods of producing synthetic sound.  The film closes with Dots and Loops, in colour. 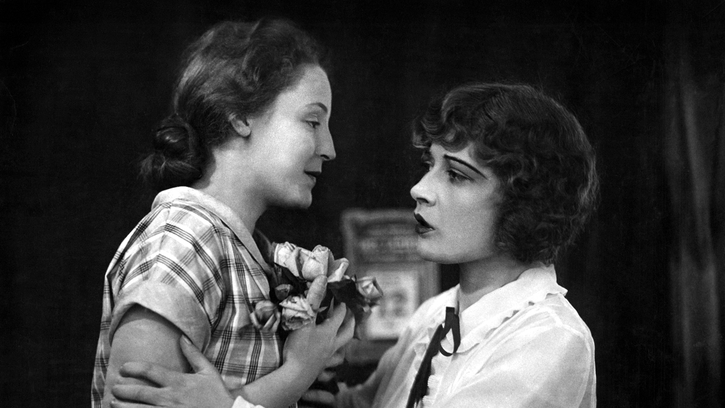 Pabst entered the filed when the great era of German production had reached its zenith, and almost immediately broke with its style.  Until now the best German films had been picturesque; but where Caligari owes much to the graphic arts and The Last Laugh much to theatre art, The Love of Jeanne Ney draws upon the younger art of photography.  His settings and his individual scenes are quite as carefully composed as those of the more obviously artistic German films, but the craftsmanship is less apparent, the spectator is led to feel “how true” rather than “how beautiful” and the eye is pleased not be aesthetic memories and comparisons, as in earlier German films, but by the uncompromising use of the motion picture camera itself.  The “new realism with a socialistic flavor” which had succeeded expressionism as an aesthetic impulse in Germany finds in Pabst’s work its most characteristic reflecion.

Yet it was not by any abandonment of German studio-craft and technical resourcefulness that this director obtained his mastery–it was by utilizing it to the full, and pressing it to further less mechanical uses.  The Love of Jeanne Ney is as much a tribute to the proficiency of the Ufa studios as was Variety: everything in it except the few Paris exteriors, however real-seeming, was taken in the studios.  In the opening scene, Pabst uses the travelling camera rather pointedly to introduce the odious Khalibiev; but the cigarette stubs, the frowzy clothing, the shattered mirrors are revealed not for their picturesque qualities.  They tell us exactly what manner of man this is, what manner of circumstances these are.  In all Pabst’s films his story is of highly individual people, here and now; and in almost all of them he utilizes eagerly one of the peculiar properties of the camera–its actuality.

This film demonstrates to the full the eloquence which a simple but intelligent use of the camera can achieve; nowhere can the theoretician or student of cinematography more fruitfully observe certain elements of film making.  Scene after scene, shot after shot, the perfect camera position has been selected.  A much more showy use of the apparatus could easily be found, but not one that would better extract the uttermost significance from the material.  Inconspicuously fine camerawork and psychological penetration are Pabst’s particular strength.  Many subtitles aid the narration of the complex plot, but it is not these which delineate character or betray impulses.  Entire and highly subtle situations are delicately, firmly drawn without any use of titles at all.  It is the camera which speaks.

It might be useful to consider one sequence in detail–that in which Khalibiev sells the list of Bolshevist agents to Ney.  It lasts about three minutes.  It contains not a single title.  It says all there is to say about the two men and about their momentary relationship.  How is it done?  Though one is hardly conscious of it, the camera is constantly shifting with the instinctive movements of psychological necessity.  Though one is scarcely aware of a single cut, there are forty cuts in this short scene–needless to say, the director edited the film himself.  Every camera position chosen unerringly, every cut made unobtrusively, every movement of the actors corresponding to an inner compulsion, the whole composition smooth yet fluid–such is a typical piece of Pabst’s discontinuous style of continuity.  ….

Though Ilya Ehrenburg, the author of the novel on which the film is based, has protested the transcription, the film preserves with remarkable faithfulness the spirit and “adventure” character of the book.  It is the treatment of the subject-matter, rather than the choice of material, which makes witnessing this film a disturbing experience, since everyone knows that there are men who, by their very nature, are crapulous, avaricious or obscene.  What appalls in the film is to see a young couple, their lives inextricably mingled with the course of events in modern Europe, seeking courage and comfort in each other in the midst of such distressing circumstances: the world about them is depicted with profound realism, and it is not customary to paint the vices so clearly.  But Pabst is a moralist s well as realist, and the motion picture camera is a formidable instrument in the hands of such a man.  In communicating sensory values and first-hand experience as strongly as it does, it exposes both beauty and evil in a light still unhallowed by the aesthetic tradition which permits us to gaze without revulsion upon Goya’s corpses and read without offence “The Outcasts of Poker Flat”.

Iris Barry in The Museum of Modern Art Film Notes

A synchronized music score from phonograph recordings will accompany the film

We regret that no evaluation forms were available to be given out at our last showing.  We are enclosing forms with these notes and would appreciate your comments on The Eternal Return as well as the shorts, Minuet and Hungarian Dance, Muscle Beach and The World of Paul Delvaux.  Your remarks will be summarized in our next programme notes.

Two recent British comedies, Mr. Drake’s Duck and The Galloping Major, while not of top-drawer quality, deserved a better first run than they got; you are likely to find them good fun if you catch them at subsequent showings.  No doubt by this time you have seen The Lavender Hill Mob at the Hyland; if not be all means do.

Three Italian dramas are of more than average interest although not among the great ones from that land: Without Pity, The Girl from the Marshes and Angelo.

A really celebrated Italian film, To Live in Peace, which Toronto has been waiting to see for years, has finally been booked into the International to follow the inexplicable and seemingly interminable run of Laughter in Paradise.

A movie called Bright Victory (though considered inferior to The Men) has generally been rated as a sincere and moving account of a blind veteran’s readjustment.  It was directed by Mark Robson, who made Champion, Home of the Brave and Edge of Doom; and Arthur Kennedy, its star, won the New York Film Critics’ award as best actor of 1951 for his performance.  If you would like to see Bright Victory, you might write or call the Uptown, where it has been advertised as “Coming Soon” (or occasionally “Next Attraction”) for months, but is continually put off in favor of routine releases.

Due to lack of space we were unable to include the “Film Guide” written for the last programme notes, though it was posted on our notice board in the lobby the night of the showing.  For those who didn’t see it and might be interested, we repeat here the recommended titles: The River, Ivory Hunter, The Wooden Horse, Royal Journey, The Well, Queen for a Day, Four in a Jeep and Chance of a Lifetime.