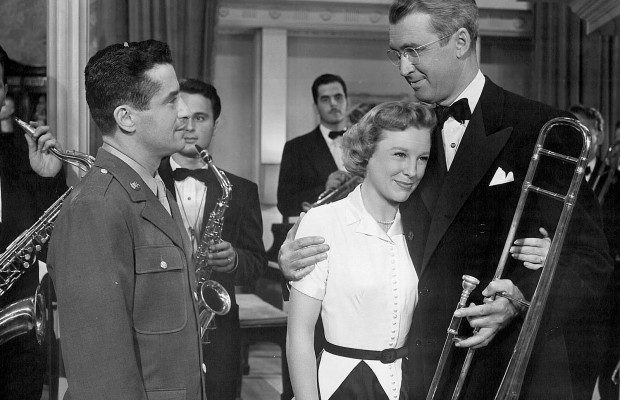 Toronto Film Society presented The Glenn Miller Story (1954) on Monday, December 4, 1978 in a double bill with 100 Men and a Girl and the short Hollywood Rhythm as part of the Season 31 Monday Evening Film Buff Series, Programme 4.

Sweet is the word the modern swingsters would apply to the type of music played in the Thirties and early Forties by the late Glenn Miller and his band. And that is the word, beyond question, for the picture that has been made by Universal-International about the bandsman, his wife, his music and career.

Not since Yankee Doodle Dandy, the film about George M. Cohan, have we seen as appealing and melodic a musical biography as this charmer, The Glenn Miller Story, which grooved into the Capitol yesterday. And not since Jimmy Cagney’s spirited playing of Mr. Cohan have we seen as likable and respectable a portrait of a show-world personage as James Stewart’s genial performance in this picture’s title role. Add the considerable measure of June Allyson’s performance as the wife and you have the exceptional combination that gives magic warmth to the film.

This is a tribute to the actors that might seem inversely to exclude the excellence and importance of other factors and elements in the film. This is not intended. The fundamental script of Valentine Davies and Oscar Brodney, which follows the customary lines of a rags-to-riches success story in the “typical American” vein, is a compound of simple, natural humors, freely expressed sentiments and interesting jazz-band arcana, written with feeling but restraint. Sentiment is the main ingredient, and this the writers have contrived in a style of offhand expression that has heart and dignity.

It is a fairly straight story they are telling—the story of a restless small-town boy who had a consuming ambition to score music and play trombone in a band, to get ahead and develop his own dance orchestra with a personality and a “sound of its own.” It follows pretty closely the pattern of Mr. Miller’s successful career, and it ends as his life actually ended with his disappearance in a military plane during World War II.

In that uncomplicated pattern, the dramatic highlights are few, but Mr. Davies and Mr. Brodney have made the most of informal episodes. The cavalier way in which the bandsman courted and won his girl is put into words and, mainly, pictures with clever good humor and charm. The chance circumstance by which Miller hit upon the distinctive “sound” of his band by giving prominence to the clarinet is intriguingly dramatized. And the real contribution made by Miller to the morale of service men during the war is movingly conveyed through the suggestion of fine cinematic images.

To a good script, of course, is added music, and this is an element in the film that Producer Aaron Rosenberg and Director Anthony Mann have worked out well. A round-up of talented bandsmen, some of them old Glenn Miller boys, appear as themselves and play the numbers in the real Glenn Miller style. Experts may have their opinions, but to this writer’s mildly trained ear the smoothness and flow of their rhythms are as fine as they ever were of yore. And Joe Yukl’s dubbing of the trombone, which Mr. Stewart manipulates with skill, is such that it is hard to imagine any brickbats from the old Miller fans.

In the way of atmospheric side-light, there is a wonderful jam session, too, performed in a smoky New York hot spot, with Louis Armstrong and Gene Krupa in command of a polychromatic rendering of the famous “Basin Street Blues.” Bathed in a flow of changing colors—purple, dark blue, sultry red—it flashes and rocks with the wild beat of the fanciful horns and drums.

… But when all is said and done, it is the sweetness of Mr. Stewart and Miss Allyson in their roles—the gentle ease, the solid form of their strong acting—that puts the living throb into the film. It is they who make genuine the tender sentiments that are worked in behind the songs. This is a wonderful achievement, of which they and their associates may be proud.