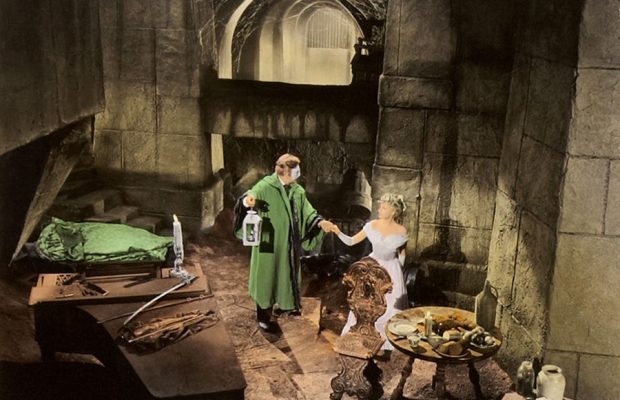 Toronto Film Society presented The Phantom of the Opera (1943) on Sunday, October 15, 1989 in a double bill with Les Miserable as part of the Season 42 Sunday Afternoon Film Buffs Series “A”, Programme 1.

T0-day’s programme offers a nod in the direction of the two extremely successful musicals which are currently dominating the Toronto theatre scene.  While the Pantages Theatre is offering “The Phantom of the Opera” and the Royal Alexandra is featuring “Les Misérables” in expensively priced musical stage productions, the TFS is giving its members both titles on a single programme.  The two filmed versions of these famous French novels are in themselves memorable.  Their juxtaposition in the same screening is a rare (if heavy) treat.  All this at bargain rates!

Gaston Leroux’s Le Fantôme de l’Opéra was an extremely popular novel not only when first published, but also through countless re-printings.  Early on, it was adapted for the stage, and when melodrama became a staple of the American film industry, it was only natural that it should be adapted for the screen.  It was even more logical that Universal Studio’s “man of a thousand faces”, Lon Chaney, should be the star chosen to undertake the role of the paranoiac composer who becomes obsessed with a young singer while, disfigured, he lives in the bowels of Paris’s majestic Charles Garnier-designed Opera House.  The Chaney film, released in 1925, featured a carefully reconstructed version of the interior of the Second Empire building as its major setting.  When Universal chose to re-make the film in Technicolor in 1943, it used the same set which had been retained over the intervening years.

One should not be misled, though, by the studio’s recycling of an old set.  This new filming of the Leroux saga was one of the most ambitious films so far undertaken by this not-so-wealthy studio.  This was, only the second Technicolor film attempted by the studio, although the technique had been available since 1935.  (Universal’s first colour film was the well-received–and profitable–Arabian Nights the previous year.)  Many lavish new sets and costumes were designed for the 1943 Phantom, and the result was some unprecedented Oscars (for cinematography, art direction and interior decoration) for this usually unsophisticated studio.  The studio investment of one and a half million dollars paid off, then, in new respect for the production values available on the lot. 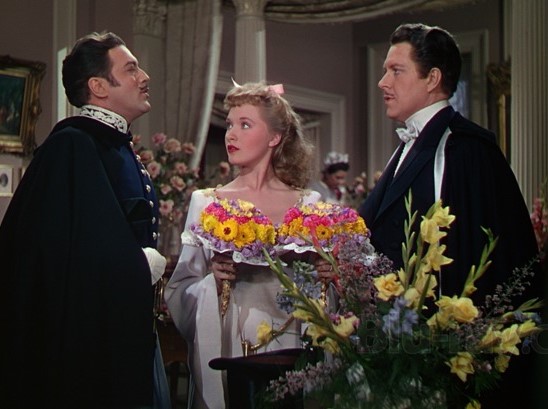 The plot of Phantom is, as every Torontonian must know this year, yet another rendition of the beauty and the beast legend.  In this version, though the “beast”, played by Claude Rains, receives only third billing.  In fact, the “beauty” (Susanna Foster), receives only second billing, leaving the top spot for Nelson Eddy, who is neither beastly nor beautiful.  (Furthermore, Eddy goes through his own form of disfigurement, as the studio make-up people chose to dye his hair black and add a thin mustache in an attempt to make the usually blond singer into a Gallic singing-suitor for Miss Foster.)  This casting of Eddy is indicative of a more global transformation of all the Gaston Lerox material.  For long before Andrew Lloyd Webber et al., Universal executives saw the potential for musical spectacle in The Phantom of the Opera.  Thus the film which they produced is much more of a musical than a horror film.  Disfigured and ruthless as he is, Claude Rains, even though made-up by Frankenstein‘s Jack Pierce, is no match for the chilling phantom earlier incarnated by Lon Chaney.

The operatic numbers, then, play an important role in the film.  Besides a portion of Flotow’s Martha, the score includes two-brand-new operatic sequences composed especially for the film from well-known themes by Tchaikovsky and Chopin.  Opera purists were, of course, horrified, even though Eddy, Susanna Foster, and a brilliantly talented niece of diva Geraldine Farrar, Jane Farrar, were all in fine voice.  (Susanna Foster was being kept under contract at Universal as a back-up–and a threat–to Deanna Durbin in case the studio’s biggest money-maker should become wayward or think of taking time off…)

The remarkable Claude Rains was in 1943 at the peak of his career.  Fresh from his work in Casablanca, he was on his way to a rare co-starring role opposite Bette Davis in Mr. Skeffington.  As for director Arthur Lubin, he would never again enjoy the opportunity of working on such an expensive film.  Typical future assignments would be Abbott and Costello or Maria Montez vehicles, and the whole series with Francis the Talking Mule.  Making over 100 movies–mainly for the same studio–he became Mr. Universal.  A sometimes dubious honour.

Because of the success of Phantom, the following year many of the same production team reunited to make another expensive Technicolor horror-musical set in an opera house.  Phantom‘s producer, George Waggner, took over the directorial reins of The Climax personally.  While Susanna Foster was back, Turhan Bey and Boris Karloff replaced Eddy and Rains respectively.  A Hammer Studios re-make of Phantom itself, with Herbert Lom, was released in 1962.

***  NOTE:  Preceding today’s feature, there will be a 10 minute short entitled Great Moments from Phantom of the Opera.