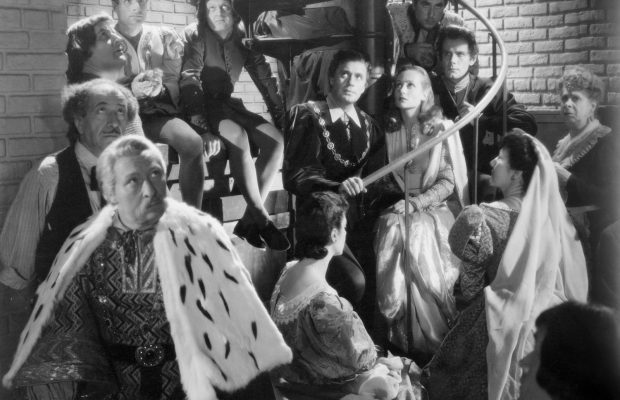 Toronto Film Society presented To Be Or Not To Be (1942) on Sunday, March 13, 1988 in a double bill with My Favorite Blonde as part of the Season 40 Sunday Afternoon Film Buffs Series “A”, Programme 10.

“What he (Jack Benny) did to Shakespeare, we are now doing to Poland” – a Nazi official upon viewing Benny’s performance of Hamlet.

No other line in any Lubitsch film has caused as much controversy as this one from To Be Or Not To Be.  As Ernst Lubitsch said:

“To Be Or Not To Be has caused a lot of controversy and in my opinion has been unjustly attacked.  This picture never made fun of Poles, it only satirized actors and the Nazi spirit and the foul Nazi humour.  Despite being farcical, it was a truer picture of Nazism than what was shown in most novels, magazine series, and pictures which dealt with the same subject.  In those stories the Germans were pictured as a people who were beleaguered by the Nazi gang and tried to fight this menace through the underground whenever they could.  I never believed in that and it is now definitely proven that this so-called underground spirit among the German people never existed.”

The film is best described in Motion Picture Guide:

“As Charles Chaplin did with The Great Dictator, Lubitsch tried to attack the Nazi regime and its easily lampooned leader with a sharply pointed comedy.  The Nazis are made to look like complete cartoonish fools, though not without the capability of ruthlessly murdering an opposition.  The Poles on the other hand, while often making many mistakes in their plots, are brave patriots who are fighting for their land–people to which “To be or not to be” refers to the country’s existence as well as to Shakespeare.  Released in 1942, in the midst of America’s involvement in WWII, To Be Or Not To Be drew a great deal of criticism by detractors who felt that Lubitsch, a German (though he left long before Hitler’s rise of power) was somehow making fun of the Poles…A masterpiece of satire and one of the more controversial films of its day, To Be Or Not To Be is a brilliant example of how comedy can be as equally effective at raising social and political awareness as a serious propaganda film, and yet still provide a great entertainment to its audience.  …To Be Or Not To Be is also remembered as the last screen appearance for the lovely Carole Lombard who, just after the film’s completion, was killed in a plane crash while on tour selling war bonds.  Rather than take a train, Lombard chose to travel more quickly through the air, hurrying back to Hollywood for a spot on Jack Benny’s radio show.”

Ernst Lubitsch is generally remembered for his cinematic wit, for his gracefully charming and fluid style, for his ingenious ability to suggest more than he showed and to show more than others dared to suggest.  For all these qualities and characteristics are collectively known as “the Lubitsch touch”.