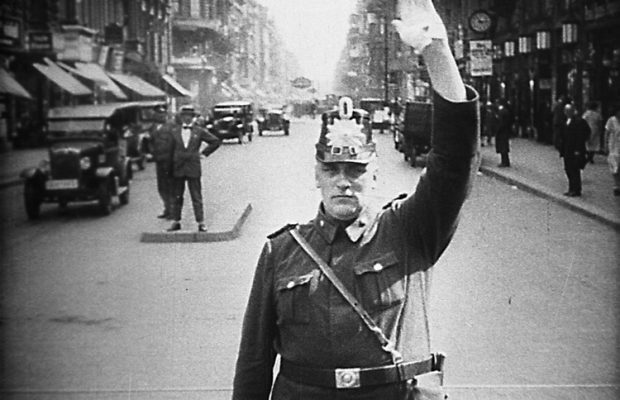 Early Films of Interest (1895-1915).  Even before the creation of the formal newsreel in 1910, the camera was recording the scenes and incidents that were to become newsreel staples.  These typical clips range from the Lumiere Excursion, which may be the first instance of camera reporting, to a Jeffries-Corbett fight staged in the Biograph Studio against a painted canvas of enraptured spectators.

Symphonie Diagonale (Germany 1921).  Directed by Viking Eggeling.  The first actual abstract films were realized in 1921 by two painters with similar ideas about the principles of plastic expression, Hans Richter and Viking Eggeling.  Having worked for three years on scroll paintings, they simultaneously made the two pioneer films, Rhythmus 21 (shown last season in the Silent Series) and Symphonie Diagonale, an experiment to discover the basis principles of the organization of time intervals in the film medium, “analogous to, but in no sense dependent upon, the abstract designs of Malevich and Klee”.

The Behavior of Light (USA 1930).  Produced by the Eastman Kodak Company.  Directed by Dr. James Sibley Watson.  Made by the co-director of the avant-garde film Lot in Sodom (shown several years ago by TFS) this film describes and demonstrates in elementary terms such phenomena as light and shadow, reflection, refraction and color.

L’histoire du Soldat Inconnu (1930).  Edited by Henri Storck.  Storck, like other “Continental Impressionists”, turned from avant-garde films to social issues at the beginning of the world depression.  This film, obviously influenced by the Russian silent classics, is a montage of newsreel clips satirizing ceremonies commemorating the war dead and indicting world rearmament.  Ancestor of many subsequent compilation films, this is useful in demonstrating the editing principle and its potentialities.

The following note is from Siegfried Kracauer’s From Caligari to Hitler:

“Paul Rotha, a close friend of Carl Mayer, said of his work on Berlin: ‘Mayer was tiring of the restriction and artificiality of the studios.  He lost interest in fictional invention and wanted his stories to grow from reality.  In 1925, standing amid the whirling traffic, he conceived the idea of a City Symphony and began to write the treatment of Berlin.’  The cameraman Karl Freund, too, was tired of the studio and its artifices, so he enthusiastically espoused Mayer’s project and set out to shoot Berlin scenes with the voracious appetite of a man starved for reality.  Walter Ruttmann, who had up to then excelled in abstract films, edited the immense amount of material assembled by Freund and several other photographers.  His sense of optical music made Ruttmann seem the right man to produce ‘a melody of pictures’.  He worked in close collaboration with composer Edmund Meisel (Potemkin), who dreamed of synchronizing Ruttmann’s visual symphony with a composition which might even be performed independently of the film.  The role he reserved for the music was bound to strengthen the formal tendency of the editing.  ‘The film as Ruttmann made it’, Rotha says, ‘was far from Mayer’s conception.  Its surface approach was what Mayer had tried to avoid.  He and Ruttmann agreed to differ.’  This accounts for Mayer’s early withdrawal from the production of Berlin.  In criticizing it he may have had in mind Ruttmann’s method of editing, which relies on the formal qualities of the objects rather than on their meanings.  He emphasizes pure patterns of movement.  machine parts in motion are shot and cut in such a manner that they turn into dynamic displays of an almost abstract character.  These may symbolize the ‘tempo’ of Berlin, but they are no longer related to machines and their functions.  The editing also resorts to striking analogies between movements or forms.  When Ruttmann does further the pictorial development through specific content, he inclines to feature social contrasts; yet these are not so much social protests as formal expedients.”  Kracauer goes on to criticize Ruttmann for reflecting the “chaos and dehumanization” of post-war Berlin without indicting it.  “Instead of penetrating his immense subject-matter with a true understanding of its social, economic and political structure, he records thousands of details without connecting them, other than through fictitious transitions which are void of content.  His film may be based on the idea of Berlin as the city of tempo and work, but this is a formal idea which does not imply content either, and perhaps for that very reason intoxicates the German petty bourgeoisie.  This symphony fails to point out anything, because it does not uncover a single significant context”.

Other scribes were less concerned with ideological implications.  Said London’s C.A. Lejeune: “Too smoothly journalistic to be among the best things in the cinema, but it is still the best example of the topographical film, the best illustration of the gigantic effects to be created from the commonplace details of daily life.  Just as Lubitsch fills his empty spaces with crowds steadily poured in from the sides of the screen, Ruttmann fills his sleeping city with activity, quickening the tempo, enriching the harmonies, working with every device of mix, superimposition and camera cunning toward the tumultuous fortissimo of the noon hour.  Berlin unfolds and establishes the personality of a city with moving images, just as a novelist constructs his characters with the choice and arrangement of words.  Through the many moods of a day, in its commonplace and romance, its pathos and fun, the city comes to life.  We get a composite and true picture of it.  We see it many-sided–as it is to the factory worker, the school-child, the business man–and in spite of this, because of this, are able to recognize the individual and indivisible quality of the whole.”

William Hunter in Scrutiny of the Cinema: “Its technique is excellent, it is a film; but the technique is unobtrusive, the spectator is not aware of it.  Berlin is an attempt to express soemthing which could not be expressed in any other medium but the film. He has shown, iwht considerable success, the life of a great city, from its first awakening, with an ever-increasing tempo, to the climax of its movement.  Perhaps it would have been better if he had carried on its movement to its gradual return to sleep, and thus given it a greater unity and completeness.  But this he did not attempt.  The film is not bey any means perfect; there are important omissions and unnecessary inclusions.  But it is nevertheless a considerable achievement.  The film is impersonal, and not (as the critics, by their suggestions that the same should be done for London, have suggested) a local record.  It is called Berlin because that happened to be the city chosen; by far the truer title is City Symphony, for the incidents and the movement are those common to any great city.  The film, before it can become a form of art, must be universal in its themes and in its treatment of those themes.” (Sic) – Ed.

Lastly I quote from a most interesting–and most curious–interview with Karl Freund that appeared in Popular Photography in February 1939, in which no mention whatever is made of Ruttmann, or of the three other cameramen credited with having shot the movie “under his supervision”, or of Carl Mayer (although elsewhere Freund has been quoted as praising Mayer and mentioning him as having had the idea for the film).  In any case this particular piece, culled from a 1946 Vancouver Film Society Programme Note, makes the whole thing sound like a one-man show, and is herewith reproduced for what it is worth.  After rightly calling Freund “one of the great German cameramen” and citying his work on Faust, The Last Laugh, Variety, etc., the article states that “Freund succeeded in interesting a group of men who sponsored him in a project unlike anything attempted before” (Berlin) and that “there was no story or script of any kind”; then goes on to quote Freund directly:

“Of course the picture had to be candid.  Since there was no script, no actors, no crews and settings, I did practically all the work myself.  I merely took my camera wherever I fancied and shot a street scene, an old laborer or children playing in a park.  My idea was to trace a day in the life of a city.  I wanted to show everything.  Men getting up to go to work, eating breakfast, boarding trams, walking.  My characters were drawn from all walks of life, laborer to bank president.  At that time there was no fast films such as we have today; but fast film was essential, so I made my own, by hypersensitizing regular stock, in an ammonia bath until it was very fast. I had to have very sensitive film: for instance, a street scene in the early morning in the slums, with extremely poor lighting conditions, made this essential.  If people knew I was taking their pictures, all realism would be lost.  I had to get candid shots.  I used a big truck for my equipment, and cut slots in the sides just large enough for the lens; very innocently I’d stand about until I noticed something unusual, or a type I needed.  Then I’d clamber in the truck and shoot.  Another very effective trick was a box I rigged up, like a suitcase, with a slot for the lens.  I went all over Berlin with my camera in that box and no one suspected.  Say I wanted an unposed sequence of people eating: I’d go into a restaurant, put the box on the table besideme and shoot to my heart’s content.  Of course, my hypersensitization process was very crude, would only last a few hours; so as soon as I’d made a sequence or two, I’d rush home to develop.  The film would fog, too, if I left it in the camera too long.  I lost a lot of marvellous shots like that.  At night I’d process more film for the next day’s shooting.  Interesting to add, I was able to take night shots, too, with my treated film.  It took me two years to finish the picture.  I started it in late spring and by the time I got well started it was winter with snow and ice.  Since the picture was supposed to repressent only one day, I had to wait until the next summer.  During the winter I cut and edited and arranged for the music.  That was a picture.  I’d like to do it all over again.”

I’m sure further comment on Herr Freund’s modesty and respect for his colleagues is superfluous. Another reason why I take some of this unarguably gifted artist’s statements with a pinch of sodium chloride–in the mid-Thirites, when he was direction “programme pictures” of varying merit in Hollywood, Freund told Variety: “The movie is not an art.  It is entertainment for 75 minutes only.  If these people who think pictures like Variety or The Last Laugh were so arty could see them today!”–or words to that effect.  Need one add that nearly 30 years after these remarks, these films are still admired and enjoyed.  Period.