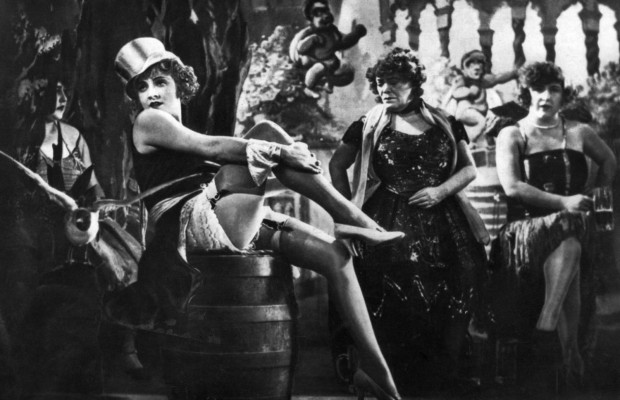 Based on the novel “Professor Unrat” by Heinrich Mann.

The Blue Angel is one of the earliest European sound films, antedating Fritz Lang’s M by two years. This print is from the British Film Institute archive. Where thereis dialogue at all, it is in English, spoken by the cast and not dubbed. These first European sound films all pointed the way to an intelligent use of sound. This particular print was apparently made for export. It has a different ending to the German ” version.”

Jannings plays the staid, bachelor professor, who attempting to save his adolescent pupils from the dangers of a vaudeville singer, is seduced by her charms himself. Dismissed from the school for his irregular behaviour, he joins the troupe and becomes a clown – a wonderfully significant clown. The story rises to a pitch and ends on a frantically ironic note. In fact, the whole film is full of irony and ironic symbolism, as opposed to grotesqueness and morbidness, as has been said of the film. With The Last Command and The Salvation Hunters it is the best of Von Sternberg’s great talent — which later went to seed.

Produced for the British Information Services by Greenpark Productions. It describes in visual terms, the conflict between the goatherds and those who are trying to make Cyprus agriculturally self-sufficient (goats are more of a menace than usual when grazed in herds, is the idea). They eat every growing, green thing in sight. This conflict is particularized and dramatized. The film has a good script, is well edited and well photographed. Timing and pacing are excellent and the mood clearly defined and sustained. The Cyprians recruited to play parts are well directed. The commentary does not suffocate with refinement or rant. Cyprus is an Island is a good example of the better British documentary.