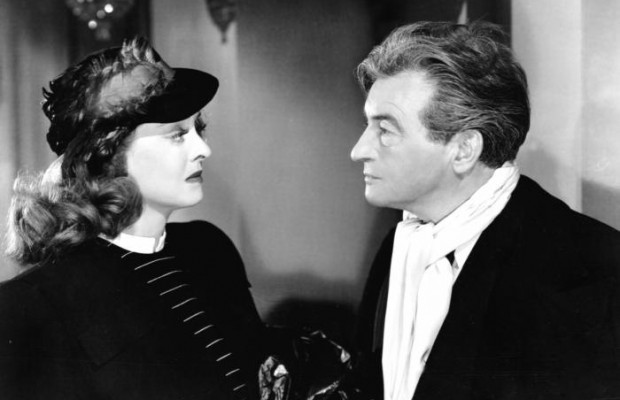 “Deception,” a story of matrimonial lies that builds to a murder climax, gives Bette Davis a potent vehicle.  Plot is backed with lavish production, strong playing of a story loaded with femme interest, and bright direction to point it for hefty boxoffice returns.  Cast is small but the names of Miss Davis, Paul Henreid and Claude Rains guarantee marquee voltage for all situations.  Another credit

adding to entertainment values is the music score, used both as plot motivation and as standout production moments.

Role given Miss Davis is less neurotic than most of her recent assignments.  She plays it to the hilt, using full dramatic talent in the reading to please her large following.  It’s not all her show, though.  Claude Rains as her elderly teacher and sponsor walks off with considerable portion of the picture in a fine display of acting ability.  His role is a choice one and what he makes of it adds much to the quality of this production.  By contrast, Henreid suffers although turning in a smooth performance in a role with not too much color.

Plot concerns deception practiced by Miss Davis to prevent husband Henreid from discovering that she had been the mistress of Rains before her marriage.  Henreid, refugee cellist, is a jealous man whose temperamental instability is reason for the wife’s deception.  Plot suspense is carefully fostered in the excellent script by John Collier and Joseph Than, based on the Louis Verneuil play.  Pickup to story comes with Rains’ entrance and his mad jealousy over his desertion by his mistress.  To him falls juicy plums in the form of dialog and situations that carry the story along.  End comes as Henreid makes his debut as a concert cellist, playing a Rains composition after Miss Davis, fearing that her sponsor planned to reveal previous relations, kills him.

Only others credited in the small cast are John Abbott and Benson Fong.  Former, as a rival cellist, makes the most of the spot and Fong gives good account to his footage as Rains’ understanding houseboy.

Finesse and understanding insight of Irving Rapper’s direction does much to point up the dramatic play and show off the players to the best advantage.  Henry Blanke’s production is lush and showmanly, abetted by fine art direction by Anton Grot and decorations by George James Hopkins so eyefully displayed by Ernest Haller’s camera.

Music importance is emphasized by Erich Wolfgang Korngold’s score and staging of orchestral numbers by LeRoy Prinz.  Korngold’s original music and the Cello Concerto are outstanding highlights that will be fully appreciated by concert lovers.

DECEPTION, screen play by John Collier and Joseph Than, based on a play by Louis Verneuil; directed by Irving Rapper; produced by Henry Blanke for Warner Brothers.  At the Hollywood.

Bette Davis is a competent actress, or so we’ve been led to believe, but they’d better start giving her good stories—or soon we’ll be led to forget. And a few more incautious selections such as the old Louis Verneuil play which has been propped up to make her latest vehicle would regrettably do the trick. This labor is titled “Deception,” and it came to the Hollywood yesterday.

The Warners may hate us for snitching, but “Deception” is based upon the same Verneuil play as is “Obsession,” a current revival on Broadway. And despite a considerable expansion in population and in the number of sets used, it tells pretty much the same story as this dreary two-character one-set trick. That is to say, it tells the story of a lady who casually forsakes a highly possessive lover in order to marry another man. And then, when the unsubmissive lover threatens nastily to tell all, the lady, for some uncertain reason, fills him full of lead.

In the play, the vengeful murder is performed by the lady’s jealous spouse, which—although it may seem a bit violent—does make a little more sense. For the film makes it so apparent that monkey-business had been going on, that the husband appears an awful dodo for not eventually catching on, while the wife’s execution of her old flame seems entirely unjustified. Indeed, the whole problem in the picture has a thoroughly artificial look.

But, then, that’s the movies for you—especially when they’re tacking up a show-piece intended primarily to exhibit an actress’ emotional range. And that, so far as we can figure, is all “Deception” is intended to do—just to give Miss Davis an opportunity to act a harassed and love-tortured dame. That she does, with such coiling of her body and rotating of her eyes as has become entirely familiar in the more unrestrained things that she plays. But the outcome of her performance still leaves her entirely unrevealed.

In the play, the man who is bumped off never appears on the stage. Miss Davis might have wished that in the film, too, he were kept more discreetly concealed. For the mephistophelian performance of

Claude Rains in this villainous role makes her look completely childish and, from the viewpoint of logic, absurd. As a famous and worldly composer with some vicious attachment to a dame, he fills out a fascinating portrait of a titanic egoist. And all of the cynical analysis which he so expressively speaks on the subject of female behavior strips Miss Davis’ character of appeal.

Paul Henreid is stolid and solemn as the man whom Miss Davis weds—the obviously tertiary character in this obliquely two-character show. He plays a distinguished ‘cellist who has escaped from Europe at last, and when he saws on his fiddle Miss Davis’ eyes suffuse with tears. That seems the only basis for her fatal attachment to him. But, then, let’s not quibble on that point. There are much larger gaps in this film. And Irving Rapper’s direction, while suggesting emotional immensities, does not impart any real meaning to an artified Frankie-and-Johnny theme.

Incidentally, a piece of music which Erich Wolfgang Korngold has composed as a sensation-stirring concerto is no more impressive than the film.