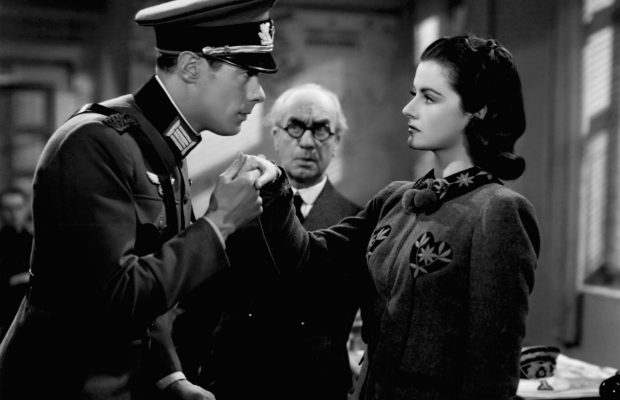 Toronto Film Society presented Night Train to Munich (1940) on Monday, November 16, 1987 in a double bill with The Great Manhunt as part of the Season 40 Monday Evening Film Buffs Series “B”, Programme 2.

Leonard Rubenstein in The Great Spy Films describes Night Train to Munich as combining several elements: “a traditional spy story, a comment on life in Nazi Germany, the clash of German and English sensibilities and a classic love triangle decked out in patriotic colours”.  The film opens with the 1938 invasion of Czechoslovakia and ends with the outbreak of World War II.  Axel Bomasch, an armour-plate scientist flees to England from Prague, while his daughter Anna is arrested and placed in a concentration camp.  At the camp she befriends inmate Karl Marsen with whom she escapes to England by rowboat.  Anna is secretly reunited with her father with assistance from Gus Bennett, an undercover intelligence officer.  Anna and her father are soon kidnapped by the Nazis and Bennett takes it upon himself to rescue and return the Bomasches to England. 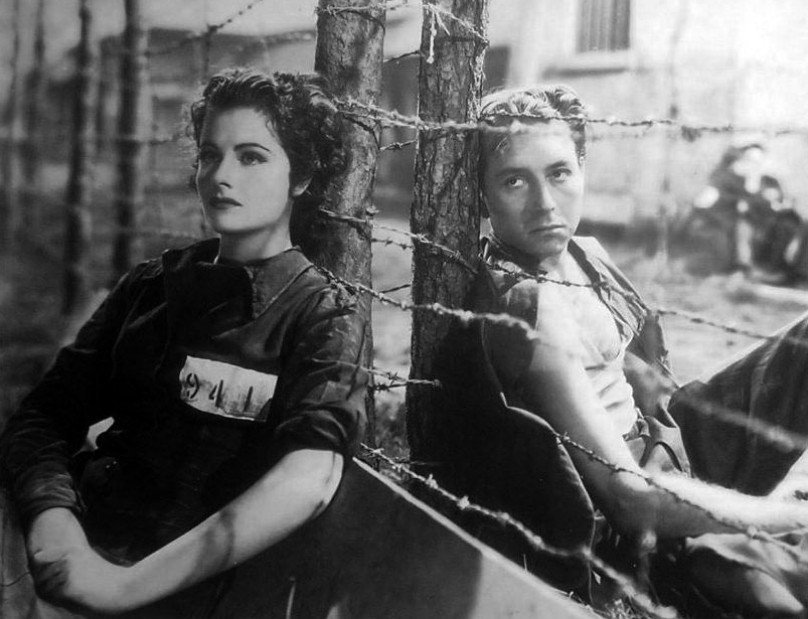 The urgency of the film and the vulnerabilities of the characters echo Hitchcock’s The Lady Vanishes made two years earlier.  There are many similarities between the films, the most obvious being the thriller genre and the reappearance of Margaret Lockwood.  The main reason, though, is that they were both penned by Frank Launder and Sidney Gilliat.  Their collaboration began in the late 1930’s and their other early screenplays include Seven Sinners (1936) and The Young Mr. Pitt (1942).  “One can get a better picture of Launder and Gilliat’s films int he 30’s by looking at their thrillers, where their distinctive approach to plot, atmosphere and characterization becomes clear” (Geoff Brown, Launder and Gilliat).  The plot of Night Train to Munich rockets to its climax and the script is cut to the bone to maintain the suspense.  The atmosphere and mood are well established and the characters are quite unique.  Launder and Gilliat’s sense of humour is continually evident throughout and Night Train to Munich, having been made early in the war, does not have the cynicism or bitterness of the films made later.  For added comic relief, Launder and Gilliat reused the characters of Charters and Caldicott, played by Basil Radford and Naunton Wayne, from The Lady Vanishes.  For example, here the loss of a set of golfclubs in Berlin overshadows the outbreak of war and the fact that they are in the enemy’s country.  Launder and Gilliat used them again as the main characters of their own film, Millions Like Us (1943).

Once Hitchcock left England, Launder and Gilliat’s scripts were directed by Carol Reed, another director with a deft hand for suspense thrillers.  His most famous films are The Third Man (1949) and Odd Man Out (1947).  He also directed Launder and Gilliat’s The Girl in the News (1940) and Kipps (1941).  His style is mainly atmospheric and he expresses much through small detail.  The audience knows that Marsen and Anna have escaped from the concentration camp when a search light passes across a hole cut in the fence.  For Rex Harrison, this was the film which really launched him as a star.  He had previously done smaller supporting roles as in The Citadel (1938).  Paul von Hernried cam to England from Austria in 1935 and was featured in Goodbye Mr. Chips (1938).  After Night Train to Munich, he went to Hollywood, changed his name to Paul Henreid and played the classic romantic leads in Now Voyager and Casablanca.