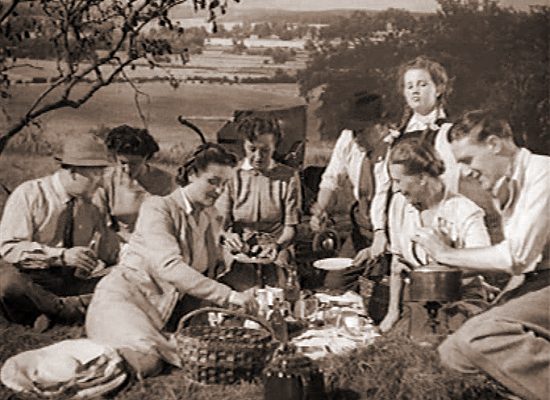 Quiet Weekend continues the story of the Royd family in a pastoral setting, where the “quiet” family excursion to the country cottage is disrupted by a series of zany events.  The plot hinges on romance and poaching–possibly the two most active enterprises, along with questionable plumbing, of country life.  When Mrs. Royd (played by Marjorie Fielding, who is the only player to reprise the same role as in Quiet Wedding) announces “You’ll find it very dull here”, the exact opposite ensues, as the restful becomes hectic and the idyllic becomes frantic.  The parallel romances, with two young ladies vying for the attention of Denys Royd (played here by Derek Farr, who was marrying into the family as Dallas in Quiet Wedding), and the elder Royds’ good friend, the bashful justice of the peace (played by Frank Cellier, who had the role as Derek Farr’s father in Quiet Wedding), trying to get up enough nerve to approach is attractive neighbour, set up a continuous comedic situation throughout the film.  Add to these machinations the poaching adventure and the various problems of a ramshackle cottage and we have all the ingredients of a lively, witty comedy of manners in the best British tradition. 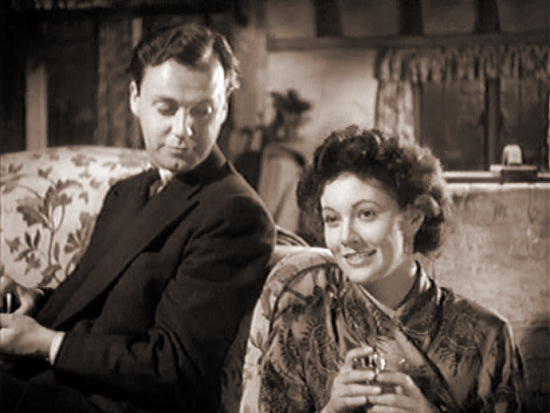 Quiet Weekend was well-received in Britain and the U.S., and praised for the convincing naturalness of the performances and script.  As with Quiet Wedding, anyone who has ever been involved with a problematic family undertaking, whether a grandiose wedding or a country excursion, will feel an immediate sympathetic response to the Royds’ predicaments.  The excellent cast provides likeable and thoroughly human portraits of the family members and friends, with special praise going to Marjorie Fielding as the understanding mother, Barbara White as the hero-worshipping young girlfriend, and Derek Farr as the much-sought-after young hero.  Variety also heralded the direction of Harold French as showing a “touch of near-genius”.

Harold French’s career included acting, writing and directing.  In 1941, he co-directed Major Barbara with Gabriel Pascal.  During 1946, in addition to tonight’s film, he directed the little-known Mr. Emmanuel and English Without Tears.  White Cradle Inn (1947 – released in the U.S. as High Fury) followed up on the post-war tensions with the brooding story of the adoption of a war orphan.  French also participated in the co-direction of Quartet (1948), a film version of four tales by Somerset Maugham.  Perhaps his best-known film is The Man Who Loved Redheads (1955) with John Justin as the man obsessed with Moira Shearer (also scripted by Terence Rattigan).

Although certainly not of the stature of Asquith, Harold French handled the humourous adaptation-by-committee and the relatively unknown ensemble cast in as creative and amusing fashion as Asquith in Quiet Wedding.  The problems of film adaptation of successful stage lays (movement, dialogue, etc.) are cleverly overcome with close attention to background and details.  Even the confusing changes of character and cast from the first film to the sequel may be overlooked when one considers that six years of turbulent wartime activities occurred between the first film and the sequel.

While neither film was reputed to rival the extraordinary success of the stage versions, both screen efforts combine to preserve for us a particular view of “the many facets of English life, the humour, the gossip, the odd character, the maliciousness, the love, and above all the unwritten adherence to a code of behaviour and honour that seems to be vanishing today” (Peter Cowie, Film and Filming, October 1963).