Toronto Film Society presented This Man Is News (1938) on Monday, February 29, 1988 in a double bill with The Naked Truth [aka Your Past is Showing] as part of the Season 40 Monday Evening Film Buffs Series “B”, Programme 5. 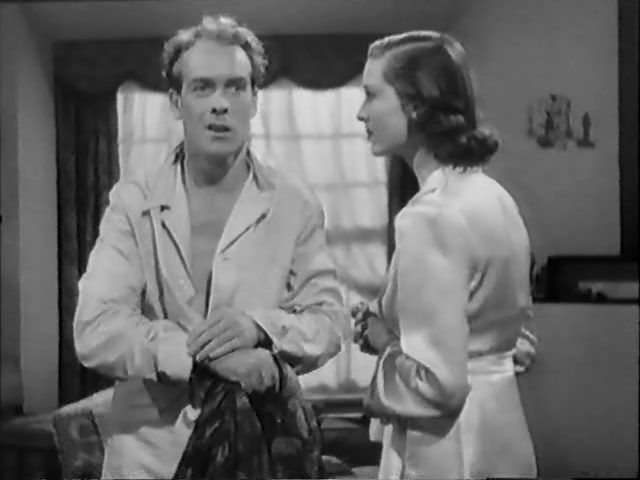 This crime comedy of the Thin Man school variety places a British journalist (Barry K. Barnes) replete with Oxford accent on the other side of the newspaper editor’s desk.  Habitually sassing all highly placed officials, this reporter is one on whom the newspaper can depend for punctilious 8 column headlines on the slightest provocation.  Discharged from the newspaper in the course of such “flamboyant” employment, Simon Drake becomes implicated in a murder case when he reports a prank “tipoff” and the squealer is found slain the next day.  Pursued by a gang of jewel thieves because he knows too much, Drake and his wife (Valerie Hobson) elude the gang in a series of escapes strongly reminiscent of the chaos and comedy of the American newspaper film.  Hobson and Barnes expose the audience to a romantic interlude based on Hobson’s droll deductions on how to keep Drake’s job and how to keep Drake safe from being bumped off.  This is a gripping, frothy, fable of a newspaper mystery story much enjoyed by British audiences on its initial release in 1938.

This Man Is News marked a turning point in the early film careers of Barry K. Barnes and Alastair Sim credited by film historians with what purports to be for both actors their first important film appearances.  Barry K. Barnes as a newcomer to the screen in the mid-1930s is the effervescent reporter who reportedly “steals” scenes from screen veterans, including Valerie Hobson.  Hobson, prime leading lady of the British screen, presents a gentle, graceful and elegant personality well-suited to the role of a well-bred English lady (recently seen by TFS film buff members in The Mystsery of Edwin Drood and also appearing in The Spy in Black, Great Expectations, The Card, and Kind Hearts and Coronets).  Alastair Sim, character actor adept at eccentric character types, most notably as Ebenezer Scrooge, provides much clowning as the managing editor without deviating from the main story.

Related ItemsAlastair SimBarry K. BarnesDavid MacDonaldMonday Buffs 40Season 40This Man Is News (1938)Valerie Hobson
←Previous The Doctor’s Dilemma (1958) and The Devil’s Disciple (1959)
Next → The Naked Truth [aka Your Past is Showing] (1957)