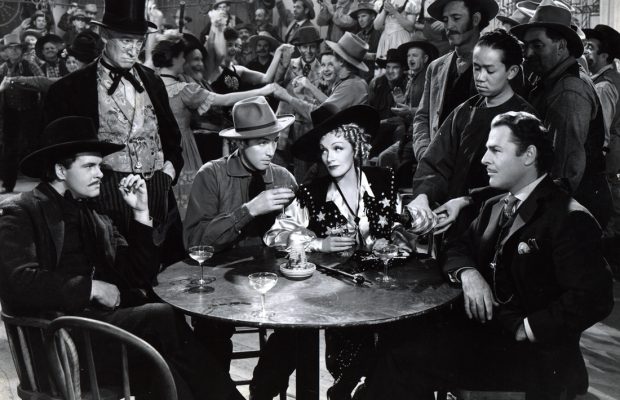 “Westerns,” George Marshall once said, “have more elements of audience appeal than any other type of motion picture.”  Destry Rides Again sets out to prove this by combining comedy, drama, suspense, romance, horseplay and songs in its narrative while never straying outside the bounds of the standard Western format.  The film displays the versatility and flexibility of the Western genre that made it the favorite of so many classical Hollywood directors, John Ford among them.

George Marshall (the director of Destry Rides Again) and John Ford actually began their directing careers on the same day in 1914, thanks to a late-night party that kept most of the studio’s top brass in bed with hangovers and forced them to leave the day’s filming to their assistants.  Marshall, like Ford, was to devote most of his career to making westerns–Destry Rides Again was timed so as to capitalize on the success of Ford’s Stagecoach made in the same year.  It was Marshall’s favorite of all his films–a satiric revitalization of a 1932 Tom Mix western that he would remake again in 1954 (when one wag suggested the title should be Destry Rides Again and Again and Again).  The plot, as usual, concerned a sheriff’s efforts to bring law and order to a small, unruly Western town but it contained enough new twists to hold an audience’s attention. 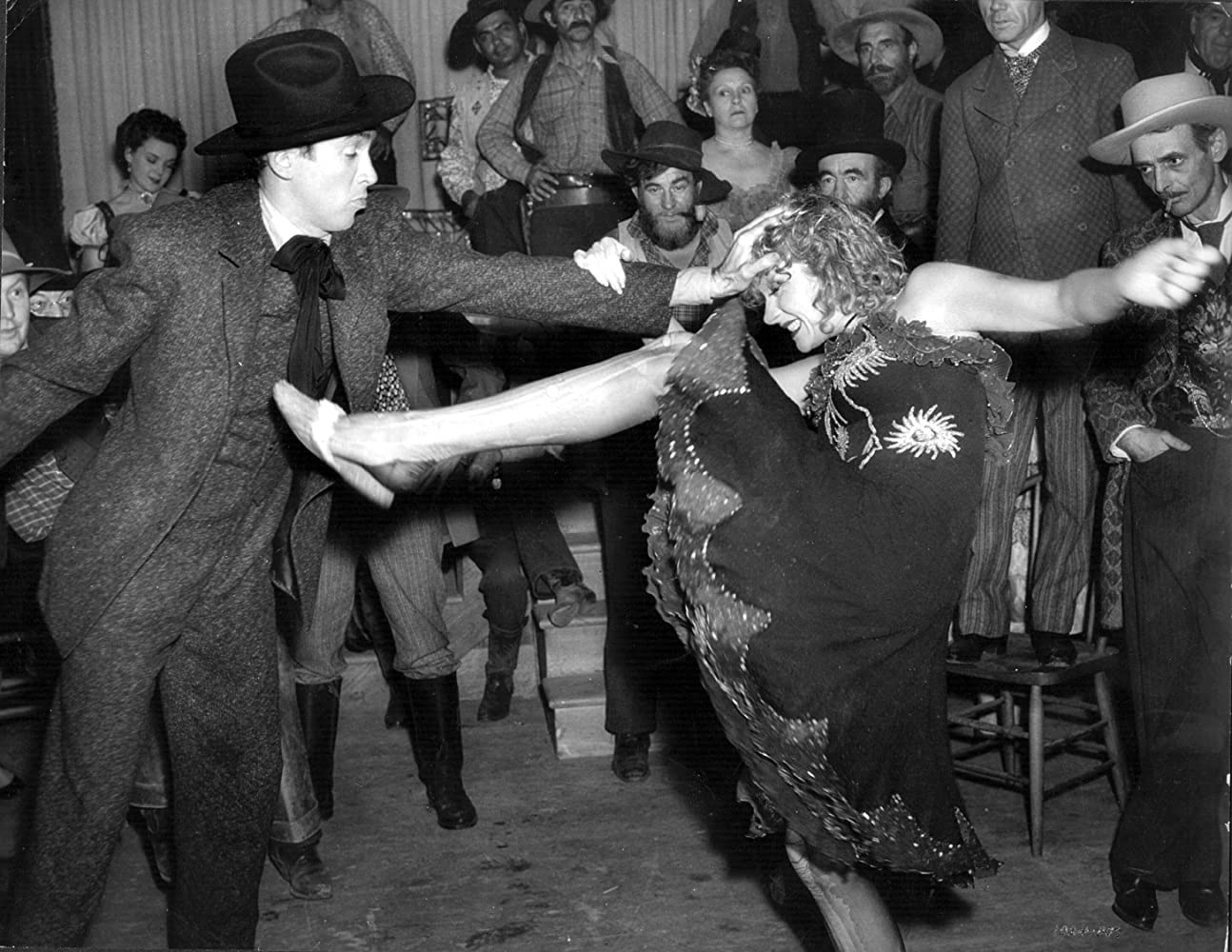 To Marshall, or perhaps to Joe Pasternak, the producer of the film, belongs the credit of having given Jimmy Stewart his first cowboy role as Thomas J. Destry, Jr.–the J. Standing for “Jefferson”, an obvious allusion to the outstanding success of his just-previous role as Jefferson Smith in Frank Capra’s Mr. Smith Goes to Washington.  Stewart delivered an outstanding performance and was to play many more such roles, most notably for Anthony Mann in the early ’50’s.  His basic acting philosophy fit in well with the demands of the Western genre with its emphasis on visual action.  In an April 1966 interview in Films and Filming, Stewart commented: “There’s a thing around the trade that western script weighs less than any other kind of movie script….I never felt too strongly about saying too much, preaching too much.  I tend more to the picture that involves the audience.  If I can get a believability about a performance or about what’s happening up on the screen, believability to me is much more important than realism.”

Joe Pasternak was definitely responsible for the involvement of Marlene Dietrich in the project–he had to fight the Universal executive who wanted Paulette Goddard for the part.  Following her performance in Lubitsch’s Angel in 1938, Dietrich had been declared “box office poison”, along with Joan Crawford and Katherine Hepburn.  Destry Rides Again proved to be turning point number 2 in her career–her performance as Frenchy, the saloon singer and card-sharp with a heart of gold, was described by one of her admirers as “tempestuous, wild, vivacious, wicked, wonderful!” and she went on to make something of a specialty out of such roles, always (as one critic notes) “with liberal use of the enigmatic stare and slurred growl that conveyed instantly a sense of gin-sodden depravity.  ” Lord Beaverbrook is reported to have said on seeing the film that the sight of Marlene Dietrich standing on a bar in black net stockings, belting out “see What the Boys in the Back Room Will Have”, was a “greater work of art than the Venus de Milo.”  TFS leaves it to its audience to cast their vote on that!

In all the attention given to the two leading players, it is easy to overlook the quality of the supporting cast but TFS members should recognize many familiar faces.  It should also be noted that Destry Rides Again probably suffered by comparison with Gone With the Wind, Stagecoach and other great classics released in 1939 (which was probably the peak year of the classical Hollywood cinema) and its true quality emerges more clearly today.