“Strange, isn’t it? Each man’s life touches so many other lives. And when he isn’t around he leaves an awful hole, doesn’t he?”

Angel Second Class Clarence’s musings sum up the central message of Frank Capra’s 1946 film, It’s A Wonderful Life. After viewing a recap of George Bailey’s life up to present day, Clarence is sent from heaven to save a destitute George from taking his own life (and to hopefully – finally – get his wings and move to Angel First Class as a result).

In a kind of reverse Christmas Carol in which the Ghost of Christmas Future shows Scrooge how awful things will end up if he does not change his wicked ways, Clarence is able to show George how awful things would have ended up if his goodness had not existed, by granting his wish that he’d never been born.

Now considered a classic, the film received mixed reviews, was unsuccessful at the box office upon initial release, and was largely forgotten after being shelved in 1947.

The basis for the film is a short story written by Philip Van Doren Stern, who sent his 24-page pamphlet, titled The Greatest Gift, to 200 family members and friends in Christmas 1943. It was first purchased by RKO studios as an intended vehicle for Cary Grant. Seeing it’s potential, Capra bought the rights from RKO for $10,000.

In his autobiography, Capra recalled “Of all actor’s roles, I believe the most difficult is the role of a Good Sam that doesn’t  know he is a Good Sam. I knew one man who could play it…James Stewart,” In an article written by James Stewart in 1987, he recounts when Capra first described the plot of the movie to him; “Then Frank stopped and said, ‘This story doesn’t tell very well, does it?’. I just said, ‘Frank, if you want to do a movie about me committing suicide, with an angel with no wings named Clarence, I’m your boy’.”

Stewart likely agreed to play George Bailey ‘script unseen’ because of his positive experiences working with Capra previously on You Can’t Take It with You (1938) and Mr. Smith Goes to Washington (1939), and not least of all because he had just returned from service in WWII with no real job prospects. 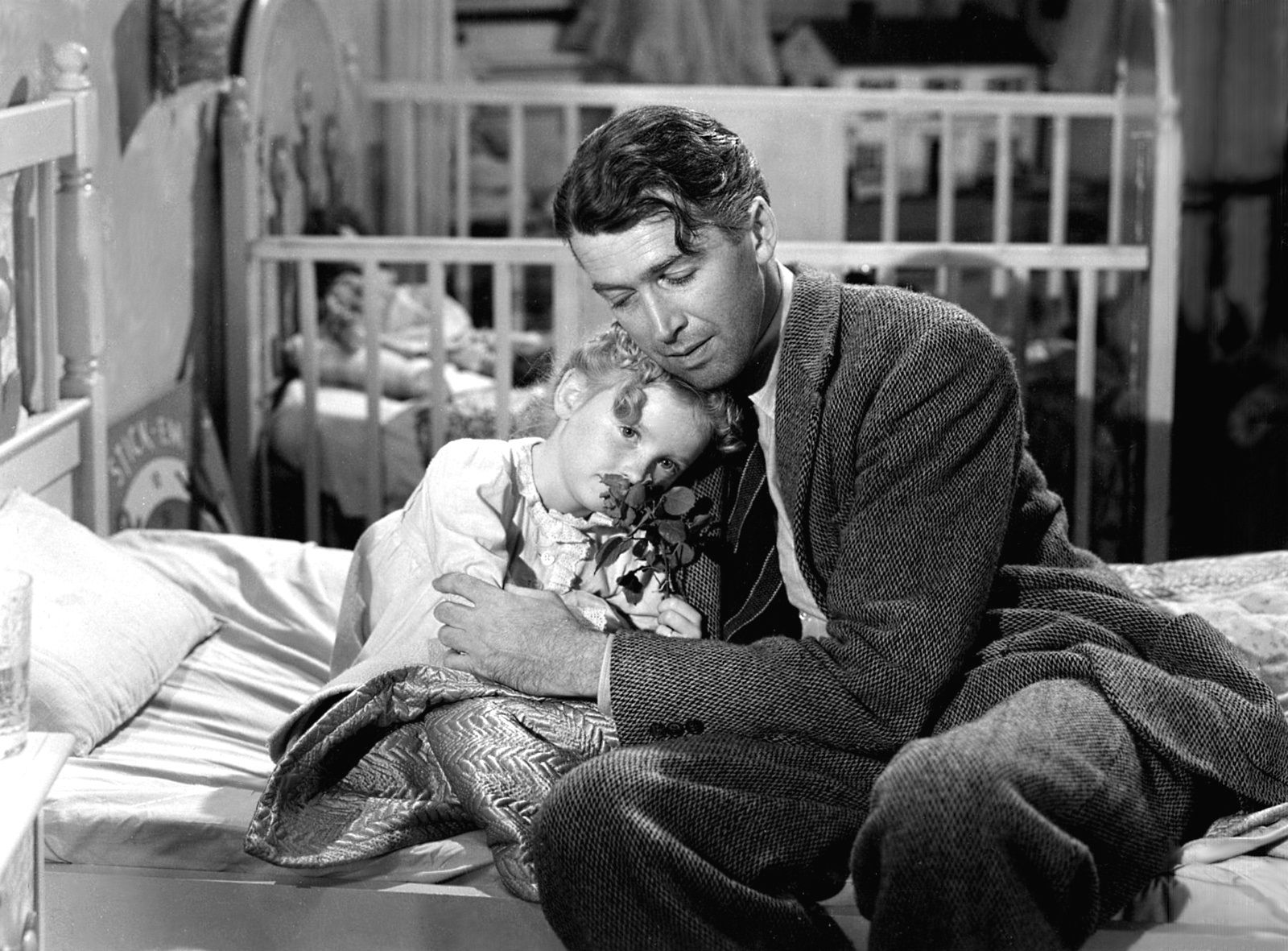 Several well-known actresses were considered for the part of Mary before Capra borrowed Donna Reed from MGM to star in what would be her first feature film. Lionel Barrymore, who plays the easily detestable Henry F. Potter, H.B. Warner, who plays George Bailey’s first boss, the pharmacist Mr. Bower, and Jimmy the Raven, Uncle Billy’s pet, had all appeared in past Capra productions. Jimmy the Raven actually appeared in 1000s of feature films from the 1930s to the 1950s, including a star turn as the crow that landed on the Scarecrow in The Wizard of Oz. Capra first cast him in You Can’t Take It With You and subsequently every other film he made, and Stewart dubbed him “the smartest actor on the set”.

A long-held belief that the police officer and cab driver characters, Bert and Ernie respectively, inspired the names of the now beloved Sesame Street characters was confirmed in 1999 by series writer Jerry Jul and Producer Jon Stone to be merely a coincidence. The film also marks one of five times Beulah Bondi played Jimmy Stewart’s mother.

The sprawling set, a recreation of the fictional Bedford Falls, spanned 4 acres and reminded Stewart of being in his hometown of Indiana, Pennsylvania. Though Seneca Falls, New York lays claim to being the inspiration for Bedford Falls, film historian Jeanine Basinger says there is no evidence to support this, and Van Doren Stern says he had Califon, New Jersey in mind when he penned his original short story (this hasn’t stopped them from opening a museum and holding an annual festival in honour of the film). Only two locations remain, the first being the swimming pool that George and Mary jitterbug backwards into during the high-school dance, located in the gymnasium at Beverly Hills High School, and the Martini home, in La Canada Flintridge, California.

Of the 5 Oscar nominations, the film only landed the Academy Award for Technical Achievement thanks to a new “chemical snow” compound that RKO Studios head of special effects created using water, soap flakes, foamite, and sugar. Prior to this, fake snow had been made of untoasted cornflakes which caused such a loud crunch underfoot that the actors dialogue had to be redubbed following takes.

Memorable on-set moments include the real slap that H.B. Warner planted on a young George (Bobby Anderson), causing his ear to bleed and Warner to comfort Anderson after the scene was shot. A drunken Uncle Billy’s supposed off-camera collision with trash cans as he is leaving the party in honour of Harry and Ruth, followed by his declaration of “I’m all right! I’m all right!”, was actually ad-libbed. A technician had accidentally knocked over some equipment and was rewarded by Capra with $10 for his ‘sound improvement’.

Stewart says he was so overcome with the “loneliness and hopelessness of people with nowhere to turn” when filming the scene in which he pleads to God for help knowing he’s facing unjust criminal charges, that he spontaneously broke down sobbing. Realizing he could not recapture the moment, Capra spent a great deal of time and money to convert the long shot into a close-up rather than trying a second take.

So how did this forgotten film make its way back into public consciousness and come to be recognized by the American Film Institute as one of the 100 best American films ever made? When its copyright lapsed in the 1970s, and it fell into the public domain, any TV station could broadcast the movie without licensing and royalty fees. PBS showed it first, followed by cable networks, until the audience grew, and it joined the ranks of other Christmas classics watched annually every December. While this brought Capra and Stewart great joy, the subsequent colorization of the film inspired Capra to issue a sickbed plea and Stewart to testify in front of a Congressional Committee to stop its release, stating “I tried to look at the colorized version, but I had to switch it off – it made me sick.” Despite their best efforts, the colorized version was copyrighted and, ironically, stations need to pay to show this version when they could broadcast the original black and white for free.

Though Jimmy Stewart, Donna Reed, and Frank Capra all cite It’s A Wonderful Life as the favourite of all the films they were a part of (Capra took it one step further in his autobiography to say, “Better yet, I thought it was the greatest film anybody ever made”), the film is not without its critics. Some malign its overtly religious overtones and simplistic sentimentality; others characterize George Bailey as a bit of a sexist jerk who is hapless at courtship. And despite the happy ending, it is hard to deny that unbridled capitalism and corporate greed have turned the modern world into more of a Pottersville than a Bedford Falls. All that being said, this is a movie about hope. As Capra said to some films students in the 1970s who asked if there were still a way to make movies about the kind of values and ideals found in his  films, “Well, if there isn’t, we might as well give up.”

The smarmy little tyke Zuzu Petals gets all the attention in Frank Capra’s It’s a Wonderful Life (1946), but let’s not forget that George and Mary Bailey had another daughter, an older daughter, a Canadian daughter.

Carol Coombs, who plays Janie Bailey, was born October 15, 1935 in Toronto. She had a surprisingly long career lasting from young child actor to minor roles in adulthood, appearing in some 24 films, including The Man Who Returned to Life (1942) and The Mating Season (1951), as well as several TV roles. 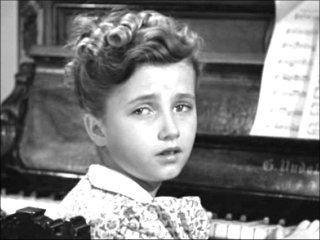 She retired into marriage and mothering in the mid-1950s, then built a second career as a kindergarten and elementary school teacher.

At the time of this writing, Coombs is still alive, still residing in Southern California, and still married to the same man. Less certain is whether she’s still up to appearing at multiple IAWL fan fests and conferences as she has done in the past. 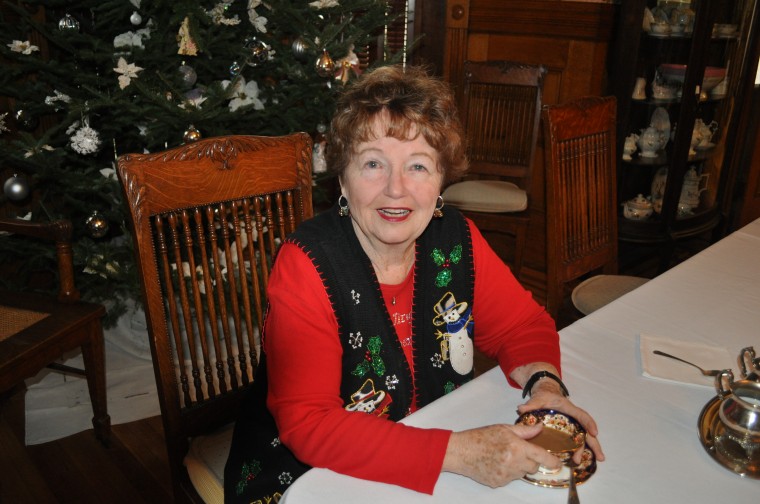