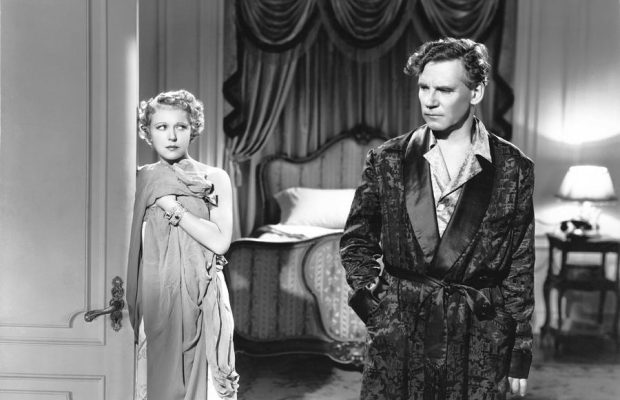 Toronto Film Society presented Dodsworth (1936) on Sunday, April 8, 1984 in a double bill with Roberta as part of the Season 36 Sunday Afternoon Film Buffs Series “A”, Programme 9. 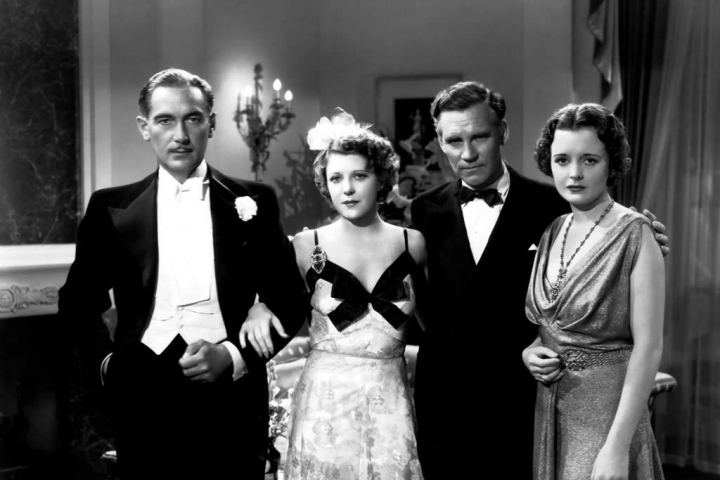 Even in 1936 Dodsworth was an oddity, for films in which the main characters are middle-aged have always been the exception.  However, it was based on a successful Broadway play, which in turn had its origins in a 1929 novel by Sinclair Lewis, the first American writer to receive the Nobel Prize.  In his novels, Lewis offered a sharp and easily assimilated image of the American upper-middle class.  Concentrating on single representative individuals, such as Sam Dodsworth, Lewis was able to define dramatically the best and the worst in American life.  Other Lewis novels filmed by Hollywood have included Arrowsmith (1931), and Cynara (1932), both starring Ronald Colman, and Elmer Gantry (1960) with Burt Lancaster giving an Academy-Award winning performance in the title role.

In a nutshell, Dodsworth is the story of American naivete meeting European sophistication.  Sam Dodsworth is a decent, successful small-town businessman from Ohio who, at his wife’s urging, embarks on a Continental tour.  She had always hated the dull and insular atmosphere of their small town and, on the brink of becoming a grandmother, is trying to forget her age and find a more sophisticated, cosmopolitan form of life.  While Sam embarks on the tour to see something of the world, his Fran goes to win admiration and soon drifts into a series of affairs with several charming Europeans.  When she announces that she wants a divorce, Sam reluctantly consents and begins traveling around Europe by himself.  En route, he meets Edith Cortwright (Mary Astor), a shipboard acquaintance, and falls in love with this warm, worldly woman.

Walter Huston recreated his stage role of Sam Dodsworth.  The part of Fran had been played on Broadway by Fay Bainter, while Huston’s wife, Ninetta Sunderland, had portrayed Edith.

Dodsworth was brought to the screen by Hollywood’s foremost independent producer, Samuel Goldwyn.  Although from most accounts Goldwyn was a ruthless, overbearing, short-tempered, generally unpleasant individual, with little formal education, he nonetheless had a discerning eye for good motion-picture material, and engaged the best talent available to film it.  Sidney Howard, one of America’s leading dramatists, was only one of such top writers as Robert Sherwood, Ben Hecht, Charles MacArthur, Edna Ferber and Dorothy Parker who worked on Goldwyn pictures.  Goldwyn was a perfectionist, but one with taste as well.  As one of his stars, Joel McCrea, wrote, “Goldwyn wanted everything associated with him to be the very best.”  And Teresa Wright, who starred in four Goldwyn films, recalls, “He set out to make each film the best he had ever made.”

Directing Dodsworth was William Wyler, working on his second film for Goldwyn after a number of years of tuning out mostly routine films at Universal.  Goldwyn hired him to direct These Three, released earlier in 1936, and the Wyler-Goldwyn team went on to bring forth some of Hollywood’s finest films.  Wyler, too, was a perfectionist, and Goldwyn gave him the freedom to film scenes time and again until he got them just right, bringing that little something extra to the screen.

On set, Wyler argued frequently with Ruth Chatterton, whom he felt was playing her character in an overly unsympathetic manner.  Miss Chatterton had been a Broadway star and a Hollywood leading lady during the 1920’s and early 1930’s; by 1936, though, her motion-picture career was nearing its finish.

Mary Astor, who worked well with Wyler, described him as “an inspirational director, tough and exacting but sensitive.”  In films since 1922, she spent most of her career as a featured player in major films or as a leading lady in programmers.  Occasionally, though, a picture came along such as Dodsworth, where Mary Astor could put everything she had learned to maximum use in a quality film.  Today, she lives in retirement in Los Angeles, the last surviving star of Dodsworth.

As Sam Dodsworth, Walter Huston was excellent: impulsive, bewildered, firm and childlike.  Throughout much of his acting career after 1929 he alternated between stage and screen.  In 1948 he again showed everyone how it was done by appearing in his own son John’s The Treasure of the Sierra Madre and won an Academy Award.  Walter Huston’s birthdate was April 6, 1884.  Today’s screening pays due homage to this Torontonian’s (!!) 100th birthday.

One of the ironies in the 1984 motion-picture scene is that, in an era when most people have far more education than was the case in 1936, a picture based on a literary classic such as Dodsworth would stand almost no chance of being made.  Today’s T.V.-conditioned audiences, it seems, have no interest in pictures that lack a shock or thrill every five minutes.  However, as long as well-crafted films such as Dodsworth are shown, those of us who prefer something better will have our vehicle back to a better time.