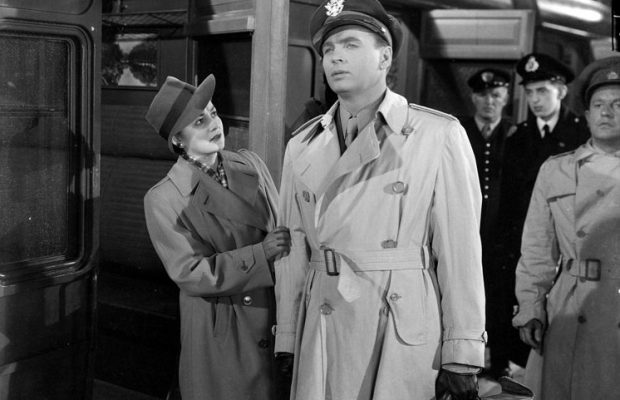 Toronto Film Society presented To Each His Own (1946) on Monday, July 26, 1982 in a double bill with Pilgrimage as part of the Season 35 Summer Series, Programme 4. 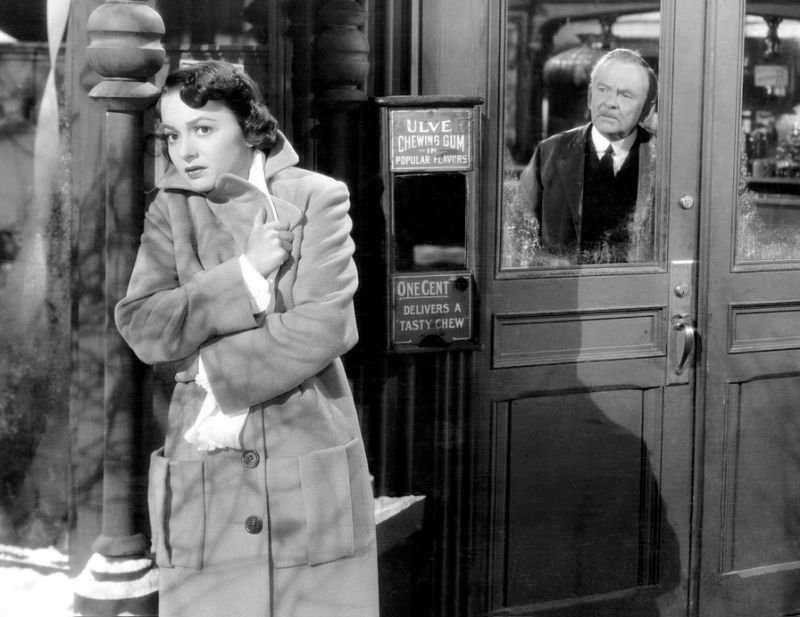 To Each His Own was the last of a long cycle of melodramas dealing with unrequited mother love, which had included Madame X, Stella Dallas, and The Old Maid.  Although such films had gone out of style by the mid-1940s, To Each His Own proved to be the best as well as the last.  It was that magical thing that happens so rarely, when a top director such as Mitchell Leisen has a script from a writer of the calibre of Charles Brackett, and an intelligent and sensitive star in the person of Olivia de Havilland.  The picture was so well done that it surmounted the plot’s limited credibility and the memories of earlier productions with similar plots.

The story opens in wartime London on New Year’s Eve, where we find the prim, middle-aged spinster Miss Josephine Norris and Lord Desham, who are assigned to watch the city for bombs from a darkened church tower.  Later, over coffee, Desham remarks that they are alike, lonely people who fill in on holidays so that others may celebrate.  Then, through a flashback, we meet the young Miss Norris of 25 years earlier, working in her father’s drugstore in a small town in the U.S.

Director Leisen’s greatest asset in making a good script come to life on film was his extraordinary knowledge of how to build tension and then relieve it, at just the right moment and to exactly the right degree.  This instinct is superbly demonstrated in tonight’s film, where such careful manipulation of mood is integral to the film’s success.  De Havilland had previously worked with Leisen in 1941’s Hold Back the Dawn, and she insisted on having him at the helm for To Each His Own.

In the second segment of To Each His Own, we are told that Josie is pregnant in a very subtle way.  When two of her friends come into the drugstore they ask for milk, saying that they need more because of their pregnancies.  After they leave, she calmly serves herself some milk.  Had the scene been played more broadly, her acknowledgment of her condition would have created a false climax too early in the film.  The scene starts a feeling of tension which builds with each succeeding sequence.

For the 1918 sequences, Leisen, who had been a set designer for C.B. DeMille, made sure that the sets, hairstyles, and costumes were scrupulously accurate.  Surprisingly enough, Hollywood, until recently, has been notoriously sloppy in creating the recent past.  Leisen’s meticulous recreation of the past helps the story by amplifying the feeling of realism.  But then, one would expect nothing less from a man who had learned his craft the hard way, through years of experience, unlike today’s “instant genius” directors.

Miss de Havilland gives great credit to Leisen for her performance, which won her a Best Actress Academy Award.  She describes how he could explain a scene so well, and how to play it, that often the first take was the only one required.  Although Paramount must have had reservations about To Each His Own, they needn’t have worried, for it proved to be a great hit with the public.

Sadly, Leisen’s career, like so many, declined in the 1950s.  He died in 1972, almost forgotten, but not by Olivia de Havilland and John Lund, who attended his funeral to pay a final tribute to the skilled and dedicated craftsman who had helped them achieve two of their finest roles.