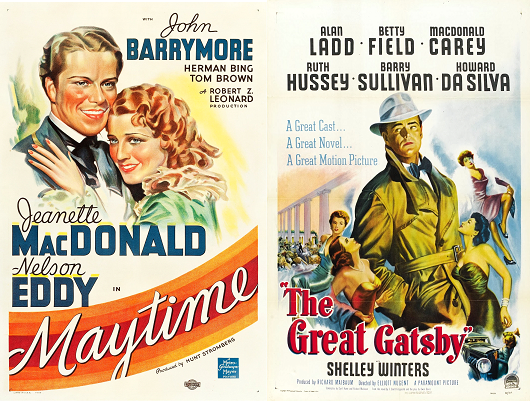 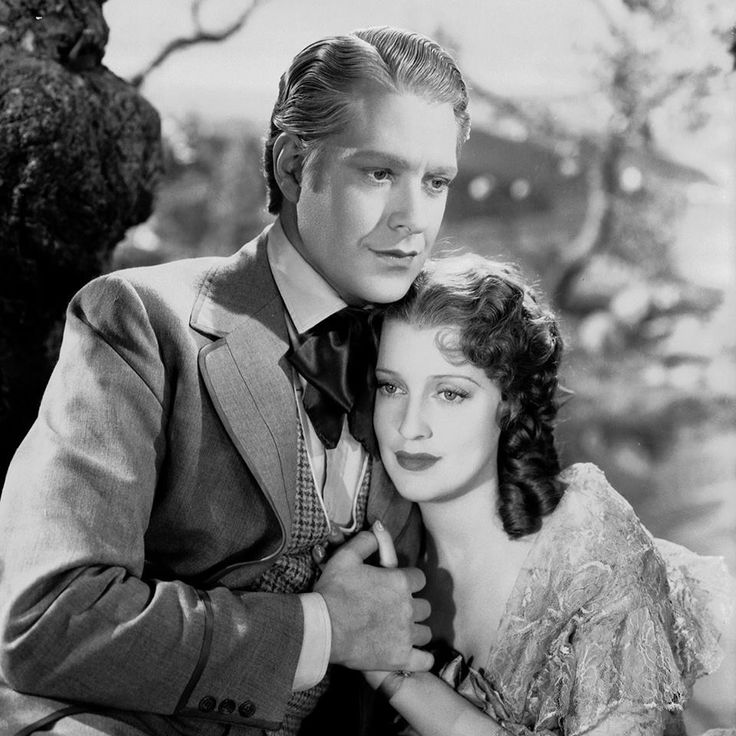 Over the past month and half, we have shown a variety of films concerning love relationships, our theme for this summer.  There have been the young lovers of Romeo and Juliet and Jeremy, and the middle-aged lovers of Dear Heart and Marty.  There has been the treachery of love depicted in The Heiress, and the fickleness in Rhapsody, plus the mother-love of Pilgrimage and To Each His Own.  Last week concentrated on May-September (December?) love in Love and Pain and the Whole Damn Thing and Harold and Maude.  Although tonight’s two films differ in many ways, they both have one theme in common–unrequited love.  In Maytime, Marcia’s love for Paul is as doomed as Gatsby’s love for Daisy.  Both films feature unhappily married women, and in both there is a climactic shooting involving distraught husbands.  With that comparisons end, because they are quite different stories.

Maytime was first a stage operetta in 1917 with Peggy Wood, and a silent film version was made in 1923 with Ethel Shannon and Harrison Ford, featuring a young Clara Bow.  The present film united Jeanette MacDonald and Nelson Eddy for the third time, and is considered by many to be their finest effort.  It was Jeanette MacDonald’s favourite film, giving her the chance to develop a strong characterization, plus an opportunity to wear the best costumes of any of her films.  Irving Thalberg was to have produced Maytime as MacDonald and Eddy’s first technicolor feature, and shooting began in 1936 under the direction of Edmund Goulding.

With the sudden death of Thalberg, Louis B. Mayer took over, scrapped what had already been shot, and decided to shoot in black and white.  Goulding was replaced by Robert Z. Leonard, and John Barrymore replaced Paul Lukas.  The film has a good story line, good music, and superb photography.  It is literate and intelligent and sumptuously mounted.  Metro rebuilt a Metropolitan Opera House of 1875, and the palace of Louis Napoleon was created.  The film contains the first grand opera music written for the screen, created by Herbert Strothart from Tchaikovsky’s Fifth Symphony, appropriately romantic music from one of the greatest of the romantic composers.  The operatic montages are skilfully introduced, especially in the fictional opera, Czaritsa.  Both principals sing their hearts out, the audience is transfixed, and poor John Barrymore (the husband) is stabbed to the heart.  It is cinematic, opulent pageantry.

The “eternal triangle” is played out once again, and in a prologue and epilogue Miss MacDonald is an old lady living in obscurity in a small American town, dreaming of her lost love.  On May Day in 1906 she helps to unite two young lovers who remind her of years gone by.  Today’s feminists would probably give short shrift to her advice to a young singer to forget her singing ambitions and accept the man she loves and who loves her, but we are dealing with a simpler time when issues were, perhaps, not as complex as they are now.  The film is beautiful and sentimental, as in the lovely scene at the May Day Fair where Jeanette is being pushed in a vine-covered swing by Eddy as blossoms spill through the air and they both sing “Will You Remember?”  Present-day audiences sometimes seem hard and cynical, rather than sophisticated, without a shred of sentiment in their souls, and some will no doubt find the feelings expressed in the film amusing, especially the wildly sentimental ending.  Perhaps the Chicago Daily News put it best when, on the death of Jeanette MacDonald, January 14, 1965, they said: “The older folks will mourn and remember Miss MacDonald and the young will never know what they missed.”  She was buried at Forest Lawn in the Sanctuary Have–next to Alan Ladd. 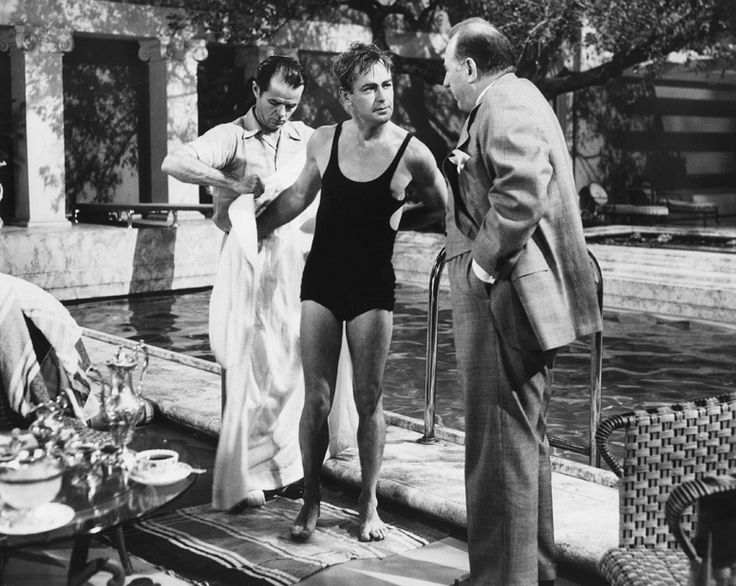 F. Scott Fitzgerald’s The Great Gatsby was unsuccessfully  staged in 1926, and the same year a silent film version was made with Warner Baxter and Lois Wilson.  Tonight’s version is the first remake, the second being the 1974 production with Robert Redford and Mia Farrow.  All three were produced by Paramount.  I have not seen the silent version, but of the two sound versions, neither totally captures the essence of the novel, though Alan Ladd’s sadly appealing Gatsby comes closer to the title character than Robert Redford’s more “civilized” portrayal.  Howard Da Silva, who appeared in both films, put it best:  “Redford could never play a man from the other side of the tracks.  Ladd could and did.”  Alan Ladd was fascinated by Fitzgeralds’s writing–he also shared Fitzgerald’s tendency to introspection and alcoholic retreat.  In playing a stoic loner, Ladd knew the territory.

Jay Gatsby is a man who rises from poverty to wealth but finds little happiness with it.  The idea that money is the only thing that matters is instilled in him at an early age, and he relentlessly uses his wealth in his single-minded pursuit of the love of Daisy Fay, his onetime sweetheart, now unhappily married to Tom Buchanan.  The meretricious Daisy is hardly worth it, but then love is blind, and this particularly holds true for Gatsby.

Alan Ladd’s performance dominates the film and rightly so, yet it is a film often overlooked in his long career.  Aside from Shane, it is, probably, his best acting performance, the role almost tailor-made for him.

If, as they say, love makes the world go round, I hope tonight’s two films will provide an enjoyable and satisfying ride on this complex and very human emotional merry-go-round.