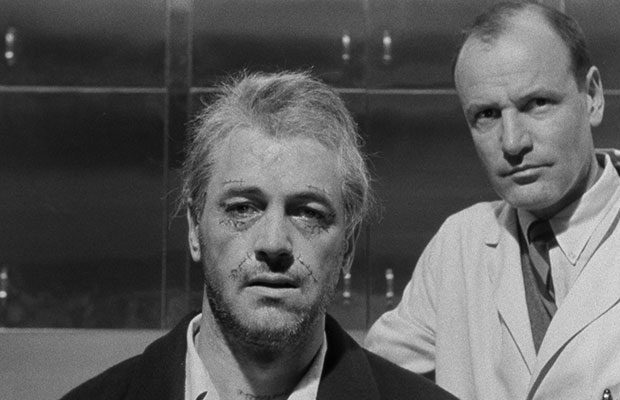 Financially independent but burned-out and middle-aged banker Arthur Hamilton (John Randolph) is dissatisfied with his dull life and loveless marriage. One day, he receives a note from a stranger at Grand Central Station and, when he arrives home, receives a telephone call from an old friend, Charlie (Murray Hamilton), whom he had thought dead. Charlie urges him to contact “The Company” that can make a life-changing offer to him. Arthur visits The Company and meets Old Man (Will Geer), who runs the corporation. Old Man convinces Arthur to be a client, saying he will have a new identity through plastic surgery and completely change his life.

Following multiple surgeries and processes, he emerges as “Tony Wilson” (Rock Hudson). In his second life, he is a young-looking and attractive artist. As The Company promises him, they arrange a new home in California. He starts living in his new home in Malibu and encounters Nora Marcus (Salome Jens) and falls in love with her in a short time. At the cocktail party he holds for his neighbours, Wilson finds out that people around him are in fact reborns. 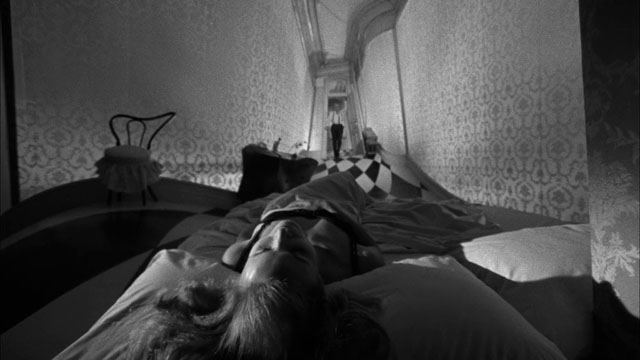 The film begins with distorted extreme close-up shots (presumably Arthur’s face through a 9.7 mm fisheye lens), which are pretty disturbing to watch in the first place, but later on, we get involved in the riveting narration of the film. As it moves on, we often see close-up shots. In this sense, Frankenheimer and the cinematographer, Howe, did a great job in terms of revealing the disturbing side of the film, Arthur’s paranoia, and anxiety. Especially, from the beginning of the film, we start feeling paranoia and stalking. For that, the camera is rigged to the body of the actor to reflect a disorienting point of view and is very effective in depicting paranoia (Snorricam – cinematic technique).

In the scene where Arthur receives a note from a stranger at the train station, although Arthur tries to focus on something else on the train, he gets anxious about the note and starts sweating. At that moment, the camera goes back and forth between Arthur’s face and hands.

Shortly after Arthur gets the note and a confusing phone call from his old friend, he goes to “The Company” to discuss what it is about. The place on the note is a tailor’s shop (just a layer to hide this fake corporation), and then he is told he needs to go to a slaughterhouse. Metaphorically, this place might leave a foreshadowing impression on the audience. (To give a hint that Arthur will be cut off like those animals toward the end of the film. The human body is just another piece of meat. That he is taken to the corporation at the back of the truck supports my thought.)

The corporation offers him a new identity, life, and elite surrounding which Arthur inwardly desires. How hard could it be? Transformation is an irrevocable opportunity for a man who never lived his life the way he wanted. As Old Man told Arthur to convince him to sign the contract, “Rebirth, life again. Begin again all new, all different, the way you always wanted it. You got another chance.” It yields a new array of his identity crisis, leaving everything behind him.

After all the surgeries and procedures, Arthur is re-born as Tony Wilson – a handsome, single man. He now has a chance to become the person he wants. “Remember, you’ve got what almost every middle-aged man in America would like to have. Freedom! Real Freedom!” Such a meaningful and intense statement! Do you think he will have real freedom with his new identity? Well, not really! The film proves that you cannot escape from your inner self and reality wherever you go, even if you physically change yourself. It teaches us that life is a one-way road, and you must accept yourself and move on despite all your mistakes and regrets.

As Frankenheimer states in his comments on the film, “an individual is what he is [and] he has to live with his life. He cannot change anything, and all of today’s literature and films about escapism are just rubbish because you cannot and should not ever try to escape from what you are… (Sterritt 22). This movie says something that I firmly believe. In life you are the result of your experiences, the result of your past. . .. If you take away your past, you don’t exist as a person. By your past, I mean your mistakes as well as your triumphs. That’s what this movie really says; that’s what it’s about” (Bell-Metereau 56).

Adapting to his new life in California, Tony Wilson and his romantic companion Nora attend a wine/grape festival where people are celebrating their free spirits by stomping grapes. Soon after they arrive, people sexually get out of control and Tony Wilson is forced to get into the wine barrel. This scene carries paramount importance in feeling Tony Wilson’s desire for freedom. While watching this scene, I questioned if Frankenheimer knew the theorist, Mikhail Bakhtin’s concept of “Carnival and Carnivalesque”.

Although it might not be an intentional reference, this scene clearly reflects Bakhtin’s theoretical concept. As Bakhtin puts it, “the carnival is an event in which all rules, inhibitions, restrictions, and regulations which determine the course of everyday life are suspended, and especially all forms of hierarchy in society. All people who take part in the carnival ‘live it’ but it is not an extension of the ‘real world’ or ‘real life’… In the carnival normally separated people can interact and freely express themselves to one another… Behavior that was otherwise unacceptable is legitimate in the carnival, and human nature’s hidden sides are revealed” (“Mikhail Bakhtin: “Carnival and Carnivalesque”). Likewise, in the film, the moment Tony Wilson soaks up the atmosphere is his catharsis. In other words, he releases his repressed emotions, inhibitions, feeling of anxiety and isolation, and enjoys being young and single again.

In a world where everything is part of a game – even his new identity, Tony Wilson is nothing more than an ideologically-established presence. In this sense, it reminds me of the Panopticon idea – the concept that dominant societies have control and power over their citizens, so to speak modern surveillance. As seen in the film, it turns out that Wilson’s butler, Nora, and other people at the cocktail are the employees of The Company. From the day when he gets into his second life, he is observed everywhere and investigated like a guinea pig. The one who gives him a second chance and takes it back in the end is The Company. “Big Brother is Watching You! (George Orwell’s 1984).

Even though Seconds has been criticized over the years and could not make a success at Cannes and the box office in those years, it is worth watching. As opposed to criticism about the main character, Arthur Hamilton/Tony Wilson (it was thought the transformation of the character was not convincing due to the actors’ physical differences), the film is extraordinary and different from those produced in the 1960s.

Personally, I paid much more attention to glowing cinematography and visually impressive scenes rather than the lack of similarities between Rock Hudson and John Randolph in the film. Howe’s camera techniques are highly innovative and beyond his era.

Seconds is a must-watch film at least once. No doubt, it will broaden your perspective and teach you the depth of cinema.

He went to Hollywood in 1946 to pursue an acting career. He found a job as a truck driver, but he spent his free time handing out his photograph to film producers.

Despite the lack of training as an actor, Hudson found the opportunity of his life. He signed a contract with Warner Brothers to play his first role in Fighter Squadron (1948). Within a short period of time, he performed in numerous films including Magnificent Obsession (1954), All That Heaven Allows (1955), Written on the Wind (1956), Giant (1956), Pillow Talk (1959), Lover Come Back (1961), and Send Me No Flowers (1964). Seconds (1966) was one of the most challenging roles he had ever played. Hudson died of AIDS-related complications at 59.

John Randolph was born in New York City in 1915. In the 1930s, he began his acting career. He played roles in many films, such as Serpico (1973), Prizzi’s Honor (1985), You’ve Got Mail (1998), and TV sitcoms, including The Bob Newhart Show, ER, Seinfeld, Roseanne, etc. In addition, he was seen on numerous local stages (in the musicals The Sound of Music, Paint Your Wagon, The Visit, Come Back, Little Sheba, and Command Decision).

Aside from his acting career, he was also a social activist. He advocated world peace and civil rights. Randolph served on the board of directors of the Screen Actors Guild and the American Federation of Television and Radio Artists and Actors’ Equity.

A pioneer, legend, and innovator, James Wong Howe is one of the most renowned cinematographers in history.

He was born in Guangzhou, China in 1899. His family moved to the US when he was five years old. At 17, he started working as a cleaner at the Famous Players-Lasky Corporation where he had a chance to make connections with the most famous filmmakers of his generation. Later, he became an assistant cameraman, so the career which would change his life began.

He brought ground-breaking techniques to cinematography and offered unconventional approaches to the technology of film. He pioneered the wide-angle lens, low-key lighting, and deep focus. He was also one of the first cameramen to use a hand-held camera. He became an expert in black-and-white photography while working on films including Air Force (1943), The Power and the Glory (1933), Body and Soul (1947), Come Back, Little Sheba (1952), Sweet Smell of Success (1957), and Hud (1963), which earned Howe the 1963 Academy Award for Best Black-and-White Cinematography. In 1955, he had also earned an Oscar for his colour cinematography on The Rose Tattoo.

Seconds was his last black-and-white film and brought him a nomination for an Academy Award.