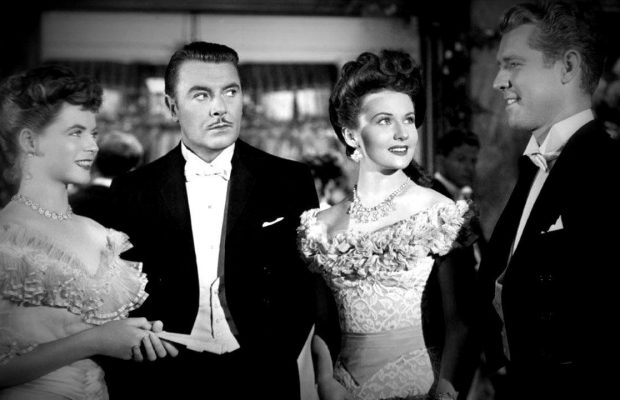 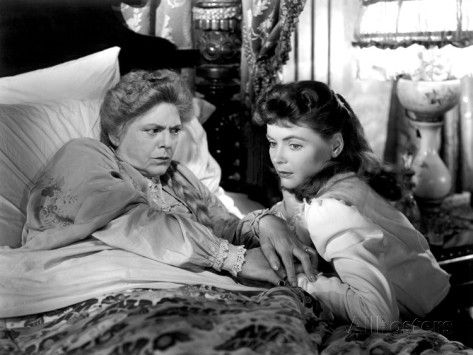 Film Noir, Gothic Horror, Mystery, Romance, Suspense, Thriller…this movie ticks all the boxes. In fact, many film historians credit this film and films like it of the era, as precursors to the modern slasher film. The elements are there: a sinister serial killer with fierce, burning eyes, who terrorizes his lovely, vulnerable victims; a stifled scream, terrified eyes, hands flung out in death throes as her life is squeezed out by a madman’s hands. Oh my! Joining the ranks of Hitchcock’s The Lodger and Lang’s M, The Spiral Staircase explores the helpless terror invoked by the mad murder. But we won’t tell you who it is; this film kept us guessing right to the very end.

Although colour films had been made for many years, The Spiral Staircase has the ominous atmosphere best done in the monochrome scenes of black and white film. Cinematographer Nicholas Musuraca, an immigrant to the USA from Italy, had an impressive career, spanning five decades (1922 to 1966). At the time he was hired for this film, Musuraca had already done the cinematography for Cat People (1942), The Seventh Victim (1943), and The Curse of the Cat People (1944), arguably low-budget but visually fantastic films. He was well known for filming techniques that created moody scenes with deep shadows, dominated by black tones, in a chiaroscuro art style. Sadly, we don’t get to enjoy the flaming red hair of Rhonda Fleming (Blanche), a stunningly beautiful actress who was once known as the Queen of Technicolor.

To keep us guessing on the killer’s identity, Musuraca filmed the eye of Robert Siodmak, the director of The Spiral Staircase, as the eye of the killer. Born to a Jewish family in 1900 Germany, Siodmak started his career in Germany but left for Paris after his 1933 film, The Burning Secret, was criticized by the Nazi Propaganda Minister, Joseph Goebbels. By 1939, he arrived in California to continue his career as one of the best directors of the film noir genre, including Phantom Lady and Christmas Holiday, both released in 1944, and then The Suspect (starring Siodmak’s good friend, Charles Laughton), The Strange Affair of Uncle Harry, The Dark Mirror, and significantly, The Killers, starring Burt Lancaster and Ava Gardner, a film that earned four Academy Award nominations, including Best Director and Best Film Editing.

As always, the supporting roles are always so important to a film. Look for a small (uncredited) part played by Ellen Corby, better known as Grandma Walton in the long-running TV series, The Waltons. The household servants, Mr. and Mrs. Oakes, were played by Rhys Williams (is he the killer? I dunno…) and Elsa Lanchester respectively. Originally from Wales, Rhys Williams had a thirty year career on stage, screen (78 films!) and television, mainly as a character actor. His very first film role was in How Green was My Valley, a film that won the Oscar for Best Picture that year. You can’t help but recognize Elsa Lanchester; her impressive career spanned almost six decades, starting in silent films in 1925. Could anyone forget her as the hissing bride in Bride of Frankenstein (1935)? Or her roles in Lassie Come Home, The Bishop’s Wife, or The Razor’s Edge? Lanchester was married to Charles Laughton from 1929 until his death in 1962.

The opening of The Spiral Staircase sets the scene of a lovely small-town location, with its businesses, residents, quirky old doctor, and the new ‘Doc’ in town, Dr. Parry (did he do it?) played by Kent Smith. But the real focus is on the residents of this fine home, headed by the bedridden matriarch Mrs. Warren, played by the formidable Ethel Barrymore. The Barrymores are decidedly part of Hollywood’s royalty. Both of Ethel Barrymore’s parents were actors, as well as her grandmother (nee Drew) and her two uncles from the Drew side of the family. It seemed inevitable that Ethel and her two brothers, John and Lionel, would find themselves on stage, especially after the early death of their mother (at the age of 37 of tuberculosis) which forced the teenaged Lionel and Ethel to leave school and work in order to support themselves; young John was able to stay with his grandparents. Although the three siblings each had impressive careers, Ethel, John and Lionel were only together in one film: Rasputin and the Empress (1932). We’ll leave it to you to connect the ‘Who’s Who’ of Drews and Barrymores today. 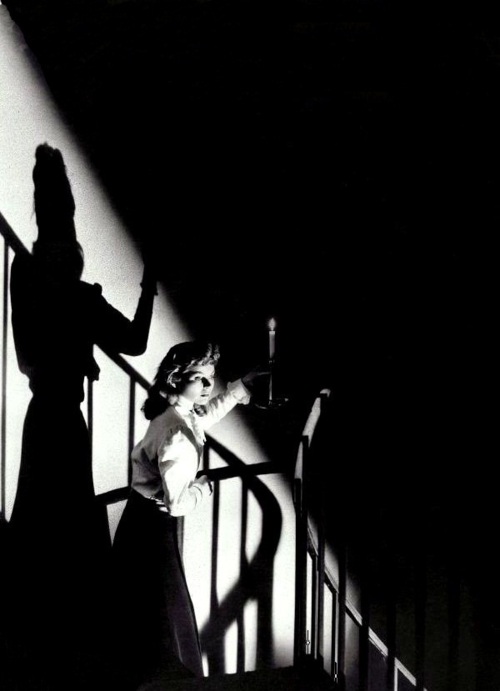 As the title implies, the spiral staircase in the large family home features prominently. This staircase isn’t the sweeping “showpiece” of the house, but rather, the servant’s access to and from the kitchen and cellar; the working bowels of the house, so to speak, neatly hidden from view. The spiral staircase doesn’t have the pretty veneer, yet it’s known to be there; perhaps, a metaphor for all things hidden and not to be seen by all and sundry. Watch as the lovely, but mute, Helen (Dorothy MacGuire) navigates the dark, foreboding staircase – can she scream to save herself? Will fiery Blanche navigate the family-side and servant-side of this home with her pride, and her life, intact? …who is the killer? Watch and enjoy the journey!