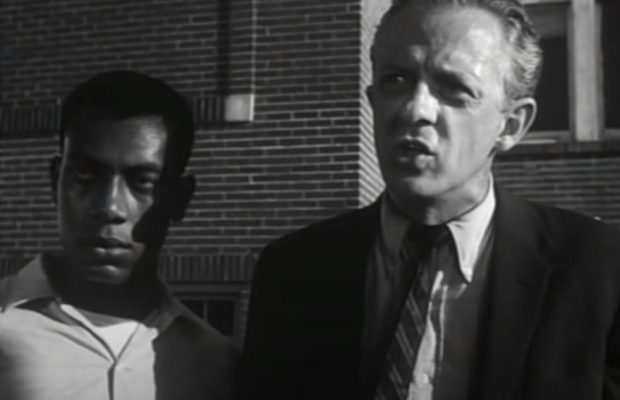 Adam Cramer (William Shatner) is a slimy, affable, white toothed and square jawed rabble-rousing agitator from the North, who slithers into a small Southern town and riles up the townsfolk against African-American students integrating with white students. Cramer doesn’t create racial tensions. No, sir. He just dashes gasoline on the embers that were already there.

While director/producer Roger Corman’s filmography has largely been focused on the horror genre for nearly 70 years at the time of this writing, his 1962 film The Intruder is his greatest horror movie. Here he substitutes the macabre and supernatural for social justice.

Roger Corman could get barely anyone to bite for The Intruder. After he bought the rights in 1960, for one reason or another, Allied Artists, United Artists, and American International Pictures all didn’t work out, mainly because the subject was too taboo. He offered the lead role of Adam Cramer to actor Tony Randall, but that deal couldn’t stick either.

In the end it was a go. The film was shot over three and a half weeks in Charleston and Sikeston Missouri.

In his book, Up Till Now, William Shatner notes while making The Intruder, the cast and crew received death threats, and the following morning after filming a big crowd scene in which Cramer riles up a mob, the publisher of a local newspaper pointed to a tree in front of a courthouse and “…That’s where they lynched a Negro about 15 years ago. A lot of people in that crowd were there. That tree is the symbol of white supremacy ‘round here…”

During the making of the film, the local police, and even the state militia had to come in and stand guard. The production saved the most visually shocking final scene for the end. They reportedly filmed it while fleeing out of the small town.

While mostly celebrated at the time, some critics felt the film a little exploitative compared to other more subtle and nuanced films of the era dealing with racial injustice. Two of the criticisms of the film is that the Black characters are, for the most part, pushed to the periphery and are sort of bystanders in the story, while the resolution seems not only lightning quick but also extremely unlikely, but you can’t have everything.

Still, for 1962 during the Civil Rights era and coming off the brutal murder of innocent black child Emmett Till in 1955, The Intruder serves as a primer for anyone back then who claimed they were blind to racial injustice. For 1962 it’s bold and brave and I applaud the Corman brothers, Roger and Gene, (in their 30s at the time) for tackling this subject when they really didn’t need to. From the 1950s and 1960s, these savvy business brothers were quite happily cranking out really cool money-making pictures targeting the newly exploited teen market with glorious schlock about swamp women, fast cars, crab monsters and beasts with an unholy number of eyes. And they were regularly turning a profit.

In February 1962, the Motion Picture Association of America (MPAA) initially didn’t approve the film because of the generous use of the “N-word.” This would have severely curtailed the film’s distribution opportunities. However, in March of 1962 a special committee was set up to review the film again and approval was granted.

The Intruder was endorsed by the National Association for the Advancement of Colored People (NAACP) and the U.S. Senate Subcommittee on Constitutional Rights.

Initially released as a prestige picture, it failed at the box office and was then repackaged as an exploitation picture under different names, including ‘I Hate Your Guts’, ‘Shame’, and ‘The Stranger’. The Intruder screened in New York City in May, 1962, and the Venice Film Festival but even after a decent start, couldn’t recoup its costs.

William Shatner told the Los Angeles Times in 1966, that he was saddened by what had happened to the movie he “risked his life to make.” The Intruder didn’t turn a profit until releases well into the 2000s. Corman believed the film failed because audiences at the time didn’t want to see a film about racial integration and that it was lecturing them. It occurred to him that any messages he put into his films had to be under the surface. To quote the philosopher Mary Poppins, “Just a spoonful of sugar helps the medicine go down…”

Perhaps, the most important message of Roger Corman’s The Intruder is it reminds us how easily manipulated we are by con men, demagogues, dictators, and narcissistic, racist, anti-Semitic, sexist, xenophobic, homophobic, opportunistic (whew!) slime balls of the world for their own purposes.

Not a great deal is known about the forgotten young Black actor Charles Barnes who plays the innocent student Joey Greene in The Intruder. Born on September 20, 1924 in Aurora, Illinois, he was known for The Intruder (1962) and Saturday’s Hero (1951).  Corman found Barnes, who was a high school honours graduate and athlete who worked with a road repair team the rest of the time. His flirtation with acting was shortlived. He died on July 9, 2005 in Austin, Texas.

As a Black man, the idea of a young Black man wrongly accused of anything as a justification for brutalization, still enrages me in 2022. It’s been used many times. It’s led to the murder, lynching, railroading, scapegoating, demonization, and abuse of hundreds of thousands of Black men over the last few centuries. In 1955, it led to the vicious beating and murder of the 14 year old Emmett Till when Carolyn Bryant, a white woman, accused the 14 year old child, who was in the South visiting, of whistling at her. The child was beaten to death until he was unrecognizable as a human being. Carolyn Bryant is still alive today in 2022. And she later admitted that she had lied about him whistling at her.

Black people have been abused, exploited, murdered, maligned, exploited, mistreated, passed over, stolen from, minimized, demonized, devalued, used as objects of fear. It’s the gift that keeps on giving.

So yes, The Intruder is a very old film, but make no mistake, as demonstrated over the last few years of fearmongering and hatemongering, and the rise in Anti-Black, Anti-Semitism, Anti-Muslim, Anti-Woman with Charlottesville, Virginia among the normalization of many other heinous examples, this could be a film made about last Thursday.

At the year of this writing in 2022 the CBC wrote of a report released by the Organization for the Prevention of Violence (OPV) speaking of the rise of ‘salad-bar’ extremism in Canada influenced by the phenomenon in the US. These aren’t your grandfather’s Ku Klux Klan. No sir, it’s a strange hodgepodge of cherry-picked ideology. In the middle of that chaos, the white supremacists, and the hatemongers, and the xenophobes wear suits and ties and shiny smiles like The Intruder’s Adam Cramer.

We’re just waiting to be led and exploited by the next lying, fascist con artist who walks into the room with a big grin.

History repeats itself. We just never see it coming. 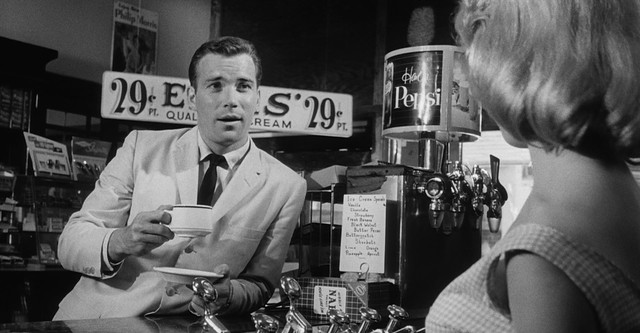 Most. Recognizable. Canadian. Icon. Ever. At least, that’s how it would sound if William Shatner were voicing this tribute.

Shatner, who turns 92 this March, was a strapping 31-year-old when he appeared in Roger Corman’s 1962 civil right opus The Intruder. Contrary to what some believe, this was not his first starring role in a film (that honour goes to the equally obscure low-budget pic, 1961’s The Explosive Generation). Still, Shatner was already an acting veteran, of Canadian TV and stage, Broadway, live TV drama showcases, plus a couple of big-budget Hollywood films (1958’s The Brothers Karamazov and 1961’s Judgment at Nuremberg).

He would go on to guest-star in countless TV shows and the occasional movie, as well as star in a dozen or so live and animated films based on his hit TV show Star Trek (1966—69). The latter has been his biggest claim to fame, and he’s ridden it all the way to his 2021 space odyssey on billionaire Jeff Bezos’s Blue Origin New Shepard-18, where Shatner not only became the oldest person to fly in space but, fittingly, the first Trek actor to do so.

Born March 22nd, 1931 in Côte Saint-Luc, Île de Montréal, Shatner grew up in the adjacent Notre-Dame-de-Grâce neighbourhood. He graduated from West Hill High School and received a Bachelor of Commerce degree from nearby McGill University (whose student centre is now named after him). He then joined a summer theatre group, before moving on to the National Repertory Theatre of Ottawa. His next step was joining the Stratford Festival, both as an on-stage actor and understudy for such thespian greats as James Mason, Alec Guinness, Anthony Quayle, and Canada’s own Christopher Plummer (years later, Plummer would play the villainous General Chang to Shatner’s Captain Kirk in 1991’s Star Trek VI: The Undiscovered Country).

Such exposure helped Shatner land larger roles in the US on live TV plays and on Broadway in 1958 as the male lead in The World of Suzie Wong. His co-star, France Nuyen, later joined him on a Star Trek episode. Shatner was even more instrumental in helping out fellow Canadian actors, most notably with the casting of James Doohan as Star Trek’s chief engineer, Scotty. (Doohan was the star of CBC’s first-ever dramatic series, presciently the kids’ sci-fi show Space Command, 1953—1954, on which a young William Shatner once performed.) Toronto’s John Colicos showed up on Star Trek as its very first Klingon, and Montreal’s Percy Rodriguez guest-starred as the authoritarian Commodore Stone, who attempts in one episode to court martial Kirk.

There was no real “life after Trek” for Shatner, despite his taking on new projects, including TV series from TJ Hooker (1982—86) to Boston Legal (2004—08). Thanks to fans of the original show, Star Trek has grown into a huge franchise that is very much with us today. So much so that Shatner is reportedly leery about using a cell phone in public, thanks to “Beam me up, Scotty!” shout outs from passersby.

The four-times married father of three girls, Shatner remains a proudly bilingual Canadian who still owns a home in Montreal in addition to his LA house (his Kentucky horse farm just went to his latest ex in their divorce settlement). He has more to be proud of, having been honoured with a Canadian postage stamp, a star on Canada’s Walk of Fame (as well as one on Hollywood’s Walk of Fame), a Governor General’s Lifetime Achievement Award in the Performing Arts, an honorary doctorate of letters from his alma mater, McGill University, and investiture as an Officer of the Order of Canada.

One freakish bit of trivia that you may not even wish to know is that, in 1978, a costume designer painted a Halloween mask of Shatner’s face all white and placed it over serial killer Michael Myers’s face in the original Halloween movie.